NIMBYism is getting out of hand in Australia, at the exact moment it is least needed.

Take an article that recently appeared in Nine’s real estate section Domain. It describes opposition to development in a street in the inner Melbourne suburb of Elwood. Three houses in the bayside suburb — outside the heritage boundary — will be replaced by a three-storey building that will provide 22 homes.

The local residents who oppose the development argue — apparently without irony — that the new homes will serve “the rich few”. In the Facebook group for my local area nothing creates more outrage than the idea flats might be built above the shops on the main road.

This is just a couple of examples of a giant trend. The NIMBY (“not in my back yard”) attitude can be found all over Australia and all over the world. Sydney is also caught in a similar furore. So-called “posh Sydney” — the eastern suburbs — is united in opposition to medium-density development “destroying” their suburbs. In the US, where San Francisco house prices have reached absurd levels but development is near impossible, NIMBYism has become part of the national debate.

The motivating factor seems to be a belief that, in cities, keeping things static is the natural order of things and change is an abomination. In fact, the reverse is true: cities are the locations of relentless change.

Across the world, cities have grown bigger without cease, for a very long time. Growth is the trend of the last 1000 years, as depicted in the wonderful graphic below, animated at this link. 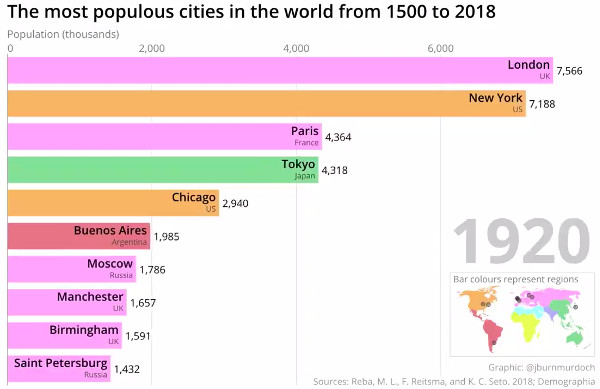 If you click the link it will take you to an animation that underscores just how powerful this trend has been. In the century since 1920, New York has more than doubled in size and still fallen to the bottom of the top 10 cities by population.

As cities add residents they don’t merely take up more land. They also add more people per unit of land. Density rises, aided by construction advances that permit types of development that were not possible in the past.

Australian cities have risen in density in recent times. For example, in Melbourne, people per hectare has risen from around 24 to 32 between 2006 and 2018.

The growth of cities is a meta-trend. We need to understand living in a city as acceptance of this meta trend. A city grows, and if you accept all the benefits of living in one, you must also accept its growth. This is especially true in Australia, where our population growth is among the fastest in the developed world. A city that does not grow, or one that shrinks, is a city that is failing. Think of Detroit.

Agglomeration economics tells us that bigger cities tend to be richer and more productive, offering higher paying jobs, better hospitals and universities, and a more diverse range of all kinds of services. In many cases, it is the largest cities that grow the fastest.

The problem with NIMBYism

NIMBYism is part of what drives property prices so high. When opposition to local development means that homes can’t be built in useful areas, the remaining homes become scarce and extremely valuable. We see property prices zooming up, but no extra supply coming on line in those areas. Instead, the development has to be further away.

Building more housing in the most useful parts of our cities is a great way to prevent urban sprawl, and reduce commute distances and inequality of access. NIMBYism is a great way to contribute to sprawl that chews up valuable city-adjacent horticultural land, and causes demand for ever more freeways.

A city is an arc that tends larger and denser. We may be dropped onto the arc at a point in time where that tendency is imperceptible. As our childhoods played out, we grew and the city seemed to stay the same. Adulthood is the reverse and that makes us feel like the natural order has been upended.

Or a person may live through a blip: a 20-year period where density in their street or suburb does not change. This may shape their view of what is normal, but it will be wrong. That observation is based on too small a sample to tell us anything about the nature of cities. You need to zoom out to understand what is normal

The big picture shows that, over time, a city grows ever denser. (This website is an amazing resource for seeing how much has changed.) 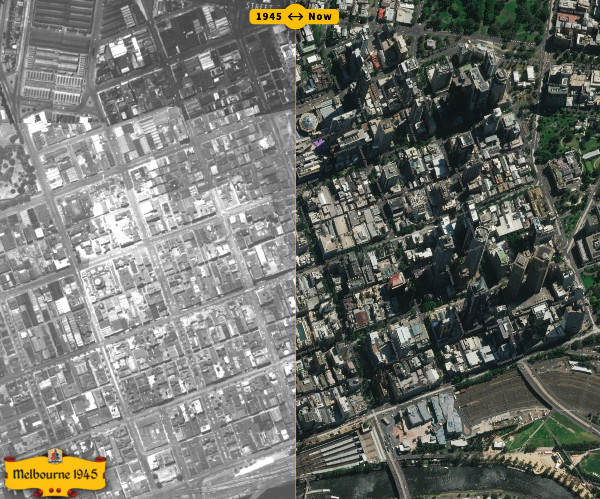 Do not mistake a brief period of stability for the trend, or for what counts as normal. In the long run, density only goes up, and to fight it is to take up a doomed battle against forces far greater than the wishes of a few local residents.

30 thoughts on “NIMBYism is out of control in Australia”