Labor's inconsistency on oversight of security agencies has left a crucial missing link on the response to the government's attacks on those who would subject it to scrutiny.

It’s hard trying to follow Labor’s position on what role parliament’s Joint Committee on Intelligence and Security should play. Labor used to support reforming the committee to give it significantly greater oversight powers for intelligence agencies and the ability to initiate inquiries.

It even introduced a bill to that effect in the Senate. Then it lost interest. When Rex Patrick tried to introduce a similar bill, Labor killed it by referring it to a committee. Maybe they thought empowering the committee was a bad move if they were about to get into government. As they say in the classics: LOL.

Now, Labor’s home affairs shadow Kristina Keneally — a newcomer to the issue — has flagged that reforming the committee might make its way up the Labor agenda again. “Labor supports reforming the [the committee] not only to review legislation but also to provide increased oversight of intelligence and security agencies to accompany their increased powers,” she wrote today. “Reforms such as these were recommended as part of the 2017 Independent Intelligence Review commissioned by the government. Among our Five Eyes part­ners, Australia is an outlier in not providing oversight such as these.”

That’s all correct, except the the alleged “Independent Intelligence Review” — more accurately, a stitch-up job by the security establishment — didn’t really recommend a substantial change to oversight by the committee. As you’d expect from a review conducted by two national security bureaucrats, they wanted to prevent the committee from overseeing security agency operations, and confine it to reviewing legislation and budgets. 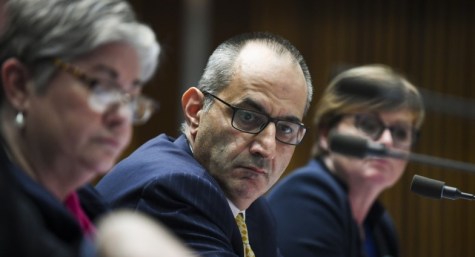 To Keneally’s credit, at least she gets that parliamentary oversight — or the almost complete dearth of it — is a key issue in the lather the governing class is whipping itself into over the increasingly aggressive and malicious abuse of powers by security agencies toward those who would hold them to account. Unless the government — which is usually the perpetrator of these abuses — wishes it, there will never be any parliamentary scrutiny of them, because the government-controlled committee is rigidly limited to looking at bills and ticking off on agency budgets.

In the United States, security agencies fear and resent congress’ powerful intelligence committees — the CIA even spied on the Senate Intelligence Committee while it was compiling its detailed report on CIA torture, and was forced to apologise for doing do.

Here, any attempt to question security agencies about their misconduct, corruption or, in some cases, actual crimes — think ASIS’ diversion of counter-terrorism resources to bug the Timor-Leste cabinet, or ASIO’s kidnapping and false imprisonment of Izhar Ul-Haque — is brushed off with the line that officials don’t have to discuss operational issues. Or there’s always the ready resort to a claim of “national security”.

What should be worrying — not comforting — is that the Prime Minister is meeting with media executives to discuss the raids and their aftermath. The rich irony is that these meetings are themselves secret, and likely amount to a demand for special treatment for journalists when our government’s war on scrutiny extends far wider than the media, who have their own platform to make their case in a way other victims of security agencies do not.

Oh, and just in case you think sections of the media are participating in this process with clean hands and good will, check out this piece in The Australian today from someone called Geoff Chambers.

As Crikey pointed out last week, the tradition at The Oz is to smear Labor as “soft on terrorism” if it questions in any way the government’s relentless extensions of security powers. Now, however, Labor has failed to question those powers enough: “despite token amendments and rhetoric, Labor can’t hide from the fact that it backed in laws that have amplified press freedom concerns”, while “Labor has publicly targeted media outlets that have put its policies under scrutiny”.

You might be forgiven for thinking the Coalition — which is unmentioned throughout the piece — has been in government for the last six years but, apparently, Chambers think Labor has been in power all along. It demonstrates that when it comes to the national interest versus demonising Labor, News Corp will take the route of malicious partisanship every time, even when it leads to its own journalists being raided.

What a pathetic publication the Oz has become, how far the once proud and mighty has fallen….glad you guys have the stomach to read it and just regurgitate small chunks to the rest of us who would not touch it with a 10 foot pole.

The only good thing about the mudorc’s empire is that it is behind a paywall so that we are prevented from accidentally having our minds soiled by inadvertently seeing any of the garbage therein.
Pity those who read it so that we need not.

While I appreciate the humour of the remark, AR, concerted rational argument could dismantle Bolt (and his ilk) in a day.

Yes, I appreciate the magnitude of the task in transferring the “message” (one only has to look to – so called – political debates, which are glorified opportunities for propaganda, on TV) but it doesn’t do to commence with “personalities”. It is about the internal consistency of the remarks themselves.

As to education (and implicitly, your remark) it is not at all clear as to what the country is obtaining for the education budget.

Sorry Kyle but I have to disagree. I have just completed reading a new book “Stop Being Reasonable” by Eleanor Gordon-Smith. The message I got from it was that most of us do not change our minds as a result of being presented with reasoned arguments. Bolt (and Jones) are like the rest of us – we all hang on to our own prejudices.

Within the last three weeks I have made mention of The Enlightenment as a political and economic movement that “dove-tailed” well with the Industrial Revolution. The movement was by no means universally popular but, as de Tocqueville pointed out in a number of essays and one book in particular, it could be “managed”. Similarly for anything from Christianity to Islam to equal pay for anyone (for the same job).

The history of human-kind (or successive civilisations – which, in another post, I DID go to some trouble to establish that the process is cumulative) is about adopting ideas (from chariots – resisted initially until ..- I won’t digress .. traffic lights).

Actually, (on 2nd thought) I will make this observation. Nowadays, we think in terms of rights for women, children, (homosexuals – if one must), education for all, universal suffrage, pensions, etc and that inequality is bad etc. Until, roughly George I (1714) people (educated or otherwise) thought the opposite. The process was not entirely “corrected” until, roughly, the eve of the First World War (1914) and some “tidy-up” hence.

I agree that the “will to uninformed ranting” has never been stronger but such is the price of universal suffrage. Similarly, education is intrusive. Gandhi and Nehru made much of this aspect and were among the FEW who recognised that one could not have it both ways. Given the raw resources of the African States such is a major factor for their impoverishment (which China is correcting by, one might say, 4th wave imperialism).

With all due respect, rather than grope about in the “self help” section, try a few texts on the “Construction of Knowledge” or Ontology or Epistemology or any such title. I’ll warrant, after three months on a much more enlightened plane, you won’t spend another dollar on a self-help book.

Sorry Kyle but I have to disagree. I have just completed reading a new book “Stop Being Reasonable” by Eleanor Gordon-Smith. The message I got from it was that most of us do not change our minds as a result of being presented with reasoned arguments. Bolt (and Jones) are like the rest of us – we all hang on to our own prejudices.

In the UK it’s “red tops” : here Murdoch’s ‘happy endings’ Muppets are more about “red light journalism”. ….. You get what you pay for.

The Australian’s pay wall refuses to allow me–a non subscriber to see this article. what is the point of including it if it is not available to many of your readers?

The Australian’s pay wall refuses to allow me–a non subscriber to see this article. what is the point of including it if it is not available to many of your readers?

Labor has been nervously trying to avoid being targeted as soft on terrorism or national security for years. It’s stance never seems to do it much good. Hopefully, now it will move to a position based on policy and principle.

To do so, of course will require it to withstand criticism from those can never let a possible ‘got ya’ moment go past, boring rubbish that it is.

…ha ha ha ha.. “Hopefully, now it (‘Labor’) will move to a position based on policy and principle…“.
Best joke of the day!
Anyone else recall that when KK was in the NSW government she introduced a Draconian law to make it a criminal offence to “upset” (interesting legalese term that thar!) attendees at the Chief Kiddie Fiddler’s World Yoof Rally in 2008?
And that was before she even became Premier as Obeid’s gurlie.

If the opposition bench has no idea as to what it is dribbling about on the matter of internal and external security (and I,for one, assume this hypothesis) then such is a very real risk.

If on the other hand, by some miracle, the ALP (collectively) is able to provide a rational document, with history on its side, then Albo has nothing to fear.