The federal election might ensure that jobs growth stays strong for another month — but eventually it will succumb to gravity.

How weak was Australia’s March quarter GDP result last week? The government used to boast of how Australia was growing faster than other developed economies. Now we’re weaker than heavily indebted Japan: Japan just reported economic growth of 0.6% for the March quarter for an annual rate of 2.2%, compared to 1.6% in the fourth quarter of 2018. Japan, by the way, has full employment (2.4%) thanks to a shrinking population — and no wages growth. (Don’t tell all the “wages growth is just around the corner” pollyannas here in Australia’s governing class.)

But the labour market is traditionally a lagging indicator on economic growth — both in downturns and recoveries. Employers continue to add workers even when sales are starting to slow, in the hope that the slowdown is temporary, then they cut jobs if it continues and deepens, starting with reducing hours and then positions — and that continues through the trough and into the upturn, until they’re sure conditions have improved. Then they wring more output from smaller work forces through longer hours, until higher demand prompts them to add jobs (part-time first).

The question for Australia is how far are we into the process — is the jobs market now a lagging indicator of the economy that the government has driven into a wall with its wage stagnation policy? 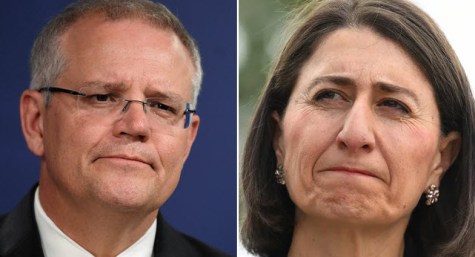 So far, jobs growth has remained strong, especially in trend terms. April saw the pace of new job creation rise to an annual rate of 2.5% (above the long term average of 2% and well above the 1.7% growth expected in the labour force this year). That 2.5% rate was the strongest since August last year. But the strength hasn’t been in private jobs growth — the hiring of workers for the NDIS, health and social care programs has been offsetting weaker demand in the private sector, especially in retailing and construction. So this Thursday will be another test, with the May labour force data released by the ABS. The closest watchers will be the Reserve Bank.

The May jobs report in the US on Friday is a warning of what may be ahead for Australia. For the second time this year, monthly job creation in the US fell far short of estimates: just 75,000 new jobs against forecasts for 185,000, and a further 75,000 were wiped from the estimates for March and April. And US wage growth slowed a touch to 3.1% from 3.2% annual — a rate that would be celebrated in Australia.

Economists do not expect much change to the April figures here. The AMP’s Chief Economist, Dr Shane Oliver, sees 20,000 new jobs having been created in May and the seasonally adjusted jobless rate falling from 5.2% in April to 5.1% in May. The short term boost will be from temporary jobs to handle the May 18 election — the Australian Electoral Commission uses tens of thousands of temporary workers in a federal election.

If jobs growth does start weakening, wage growth won’t be far behind. The Wage Price Index has been static now for nine months at 2.3%. With 335,000 workers due to lose penalty rates from July 1 and the 3% minimum wage rise — smaller than the 2018 rise — expected to trim the Wage Price Index, wage growth could dip in coming quarters.

And the March National Accounts last week showed an even weaker trend in wages — average compensation per employee, one of the favoured measures for the Reserve Bank, was up by just 0.4% in the quarter and 1.4% over the year. That, of course, will feed through into household income and will further undermine retail sales. The April retail sales data, which showed a national 0.1% drop, contained a particularly shocking number: the value of retail sales in NSW — the country’s biggest retail market — fell 0.4% seasonally adjusted. In fact, turnover in NSW in April was lower than it was last August in seasonally adjusted terms.

That’s stagnation and that’s why, at some stage, jobs growth will very likely catch up with reality in the wider economy.