Does Scott Morrison’s cabinet really have a record number of women?

Is Scott Morrison's claim that his new ministry fields the greatest number of women of any government true?

The cabinet reshuffle following the Coalition’s election victory has allowed a number of new faces into the ministry, including women, following the departure of several senior cabinet ministers.

“The ministry that I announce today maintains the record representation of women in cabinet for an Australian Government, with seven female members of our cabinet.”

Is he correct? RMIT ABC Fact Check runs the numbers.

In nominal terms, no other government has ever had seven women in cabinet, as Mr Morrison has since March.

The previous record was six, which was equalled by both Labor and Liberal prime ministers over the last few years.

Mr Morrison then promoted Western Australian senator Linda Reynolds into cabinet in his role, bringing the total number of women in cabinet to seven, including:

In January, Ms O’Dwyer had announced her retirement from politics, but continued in her role until the election.

After the election, Senator Payne and Ms Andrews continued in cabinet in their roles, whilst Senator McKenzie, Senator Cash and Senator Reynolds were given new or adjusted portfolios, still in cabinet.

Despite insisting during the final leaders’ debate that Ms Price would remain in her role post-election, the Prime Minister moved her to defence industry and demoted her from cabinet.

Former health minister Sussan Ley, who was demoted in 2017 after an expenses scandal under former prime minister Malcolm Turnbull, was brought back into cabinet to replace Ms Price in environment.

Mr Morrison has promoted South Australian senator Anne Ruston to cabinet in the families and social services portfolio, thus maintaining the number of women in cabinet at seven:

The graph below shows that indeed, in terms of raw numbers, Mr Morrison’s cabinet has held the record for women in cabinet since early March. 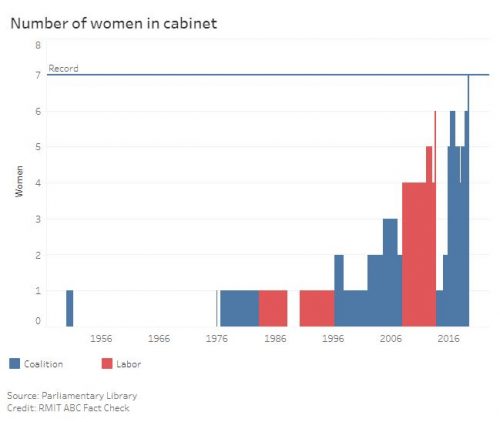 But Mr Rudd did not just hold the nominal record, he also held the record on proportion.

After returning to the prime ministership, he had six women in his cabinet of 20, or 30 per cent.

Mr Rudd has held that record through the term of the Coalition Government, until recently. 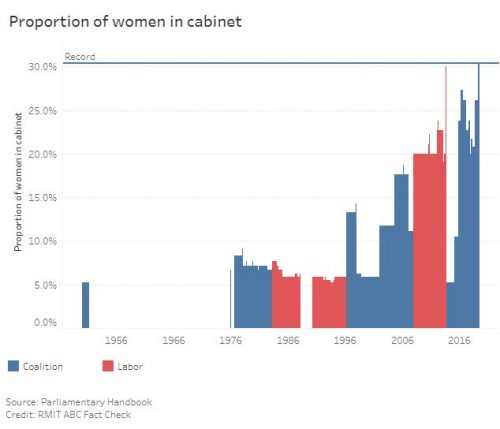 With seven women in a cabinet of 23, Mr Morrison has barely scraped over the record, with a 30.4 per cent proportion of women in his cabinet.

This means that no government of either stripe has ever exceeded more than one-third representation of women in cabinet.

Does Australia have the highest food security in the world?

What does being unemployed do for your chances of ever working again?

Seeing as the women in the cabinet are not all from the liberal party, I don’t really think that it counts.

I agree, bj…great observation.
It is NEVER acknowledged, but Labor is the largest political ‘party’ in the country, receives more votes than any other single party, and always governs alone…without the assistance of various drongo hangers-on!!!!!
Just in case there are pedants out there…the Gillard government had an ‘agreement’ with the Greens…NOT a coalition. There were NO Green ministers…female or male!