The number of religious Australians may be in decline, but it won't help Labor much in the short term.

Coming as it did at a time of chronic wage stagnation and worsening economic malaise, many explanations for Scott Morrison’s surprise election win have turned on cultural rather than economic factors.

In particular, conservatives smarting from the same-sex marriage defeat in November 2017 were keen to claim vindication from a victory built on thumping Liberal swings in areas with high rates of religious observance. As well as outer suburbia and regional Queensland, this phenomenon was said to encompass areas of Sydney which, being dominated by non-western immigrants, were immune from the depredations of “cultural Marxism”.

Such areas had also been notable for their resistance to same-sex marriage, for which western Sydney and rural Queensland stood apart from the rest of the country in returning majority no-votes.

The point was acknowledged by Labor’s Chris Bowen, who, after copping a 5.6% swing in his western Sydney seat of McMahon, said it had frequently been put to him that “people of faith no longer feel that progressive politics cares about them”.

Not everyone is convinced by the “Bowen thesis”, as it was described by academics Andrew Jakubowicz and Christina Ho in The Conversation. Alternative explanations offered for Labor’s sagging support in migrant areas of Sydney included economic issues, a backfiring of Labor’s promise to expand parental reunion visas, and adroit Liberal campaigning among the Chinese community.

However, all of this was based on an impressionistic view of swings at polling booth and electorate level, which can be apt to mislead if extrapolated to the many different types of voters who live alongside each other.

For more instructive insights into what motivated religious voters, migrant or otherwise, those of us without access to internal party research will have to await the publication of the Australian National University’s regular in-depth Australian Election Study survey.

We can, however, glean useful insights from Australian Election Study results of the recent past — and what they show is that religious voters are indeed unusual in their electoral volatility, and hence in their importance to the calculations of political strategists. 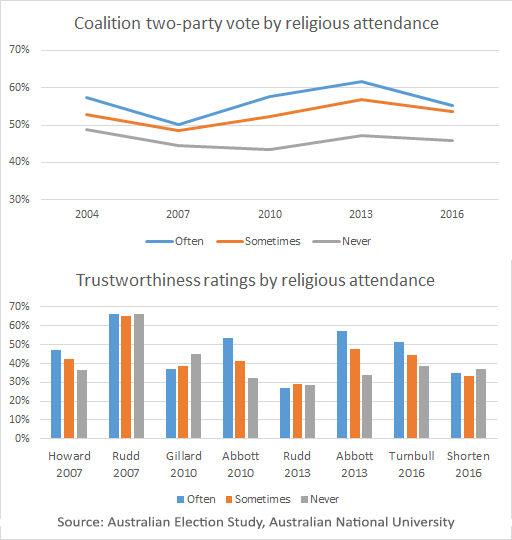 As may be expected, those who reported attending religious services at least once a month leaned conservative relative to the rest of the population, but they nonetheless broke evenly on two-party preferred at Labor’s modern high water mark of 2007.

However, this was followed at subsequent elections by a forceful backlash, for which perceptions of the party leaders appeared to be the main driver. Kevin Rudd bucked the usual pattern of Labor leaders being rated less trustworthy by religious than non-religious voters, both in 2007 and 2013, although his standing on the latter occasion was so low across the board as to preclude it being much use to him.

He also faced in 2013 the polarising force of Tony Abbott, who recorded some of the best ratings of recent times among churchgoers, and some of the worst among the non-religious.

The results from the 2016 survey provide some support for the notion, popular on the right of the Liberal Party, that Malcolm Turnbull brought the government to the brink of defeat by losing religious voters, who appear to have flocked back to the party under Morrison.

Notably, the fact that non-religious voters trusted Turnbull a lot more than they did Abbott did not translate into extra votes for the Coalition, whereas a two-party swing to Labor of 7% was recorded among the religiously observant. It may be noted that religious observance is continuing to undergo a steady long-term decline, with 47% of respondents to the 2016 Australian Election Study reporting that they never attended services, compared with 37% in the first such survey in 1987.

However, this is happening far too slowly to do Labor much good in the short term — and the striking fact remains that by far their best result of the last quarter century was achieved under the leadership of a devout church-goer from Queensland.

Give me the child for the first seven years and I will give you the man (or woman). Luckily for society most of us grow and educate ourselves out of early indoctrination, but obviously many don’t and still latch on to the most ‘religious’ of candidates. It’s not by accident that religion still thrives in the least sophisticated of nations around the world.

All religions are a form of group delusion, resulting from historical scams of vast proportion, but do serve some purpose as a social support system.
I have no real issue with people harbouring such delusions, but they should be able to separate faith and politics in their gullible minds.

The observation, by a Jesuit, is much less about indoctrination as about the early learning years within a culture. In many respects the remark amounts to the first Behavourist observation; Behavourism being the psychological view that people are conditioned by their environment. Marx said much the same thing.

Skinner took the school in his own direction but let’s not get side-tracked.

Religion, Brief, thrives in the USA and in India. Until relatively recently, (to the end of WW2) it thrived in the UK and is still fairly strong in Ireland. Most people nod towards god in their census forms.

Having had a bit of a voyeur on Skeptic and others I can say that the atheists on such sites are no less deranged than the religious nutters. There is no hope.

This is all very interesting, but my Christian faith makes me much more progressive. I suggest there are many others like me – and that there is a wide divide in the faith. Certainly some are religious, traditional and conservative, but others, who take there faith seriously (more seriously that Scott Morrison who said he does not allow his faith to affect his politics) are not traditional or conservative, and do not find having the label “religious” is comfortable.
Alan Baker

Is this meant to be a joke?

Just waiting for another article, warning that rusted on Labor voters might not vote for Labor. Give it a rest.

As with Sir Humphrey, I hardly know were to begin by critiquing this (cough) gem of an article.

HRH, The Queen, is entirely correct as she opined as to the change of attitude regarding homosexuals over the last 60 years; roughly the interval of her reign. Few in Australia (or anywhere in the first world) would deem it rational to lock up a butt bandit with a congregation of men. To this end SSM is tolerated if not universally accepted or accepted as a communal reality along with other perceived ills of society. As an aside Queen Vic. didn’t think lesbianism possible and refused accent; I think the last refusal in history.

There is also the acceptance that male homosexuals are generally more creative and intelligent if less practical (however defined) and much more moody than their “straight” counterparts.

As to the graphs it seems that religious observance not a factor for Labor PMs. The sample size has not been advised but I’ll wager that the the graphs would fail a Chi-squared test (of significance); the first bar chart in particular.

I’ll BET a slap. Please provide the quantities of each trial and *I* will undertake the exercise (with Ho : no significance – your stats mates will know what that means).

What HAS CHANGED for the ALP is the Catholic component of the vote. Until roughly the mid 50s the ALP was the party of the unskilled, semi-skilled and Catholic. The Libs tended to collect the skilled tradesman vote along with the small retailers. At a mild push, this group was also somewhat more represented, proportionally, at Sunday observances.

While church attendance as declined appreciatively, over the last 50 years, the country (70 odd percent) identifies with Christian values regarding the census. Alternatively, few identify with atheism.

Also interesting is that Whitlam championed the “right” of the nuclear family to split (following on from no-fault divorce) and supported single-anything. The latter end of Keeting as well as Gillard made some major changes in that respect which could not be more perceived as Liberal policy.

I don’t get paid for writing for Crikey and I think I’ve done what is possible to correct, in some way, this mess of an article but there is one more thing to add. Given the ranting of the Lib/Nat brigade as to “the family” there is, I suspect, a perception that the ALP has has ignored this sentiment as to working people who, allowing for contemporary events, also deem the nuclear (only) family as significant. The incentive to include all families (a perception as to the ALP and the Greens) has made little headway.

Perhaps religious people are tired of waiting for Armageddon and decided to hurry it along by voting conservative.