Was Greens MP Adam Bandt correct when he tweeted that one in four people living in poverty work full time?

In the lead-up to the federal election, Greens MP Adam Bandt called for the minimum wage to be increased to a level equal to 60 per cent of median income, so as to be a “living wage”.

“Nearly 1 in 4 people in poverty works full-time. It’s a national disgrace,” Bandt tweeted in support of his call.

The source of his claim, the Poverty in Australia 2016 report, suggested that one in five people in poverty lived in a household where the reference person (as identified by the Australian Bureau of Statistics) was working full time.

In the updated 2018 report, this number had risen to one in four.

However, the proportion could include children, unemployed people or those working part time who live in a household where the “reference person” works full time.

Fact Check invited three experts to conduct an analysis based on the individual labour force status of working-age adults living in poverty, which showed that around 12-16% worked full time (which would translate to between one in six and one in eight).

The source of the claim

Bandt’s website lists as the source of his claim a 2016 report Poverty in Australia.

Published by the Australian Council of Social Services (ACOSS) and the University of New South Wales’ Social Policy Research Centre (SPRC), the report relies on data drawn from the Australian Bureau of Statistics’ survey of income and housing.

A spokesman for Bandt confirmed the report as the source, but added that he was aware of a more recent report, published in 2018.

In a press release dated March 26, Bandt repeated his claim, stating: “When 1 in 4 people in poverty is working full time, our labour laws are broken.”

Both the 2016 and 2018 editions of the Poverty in Australia report measure poverty according to two “poverty lines”.

Accordingly, a person is considered to be living in poverty if their household income is below either 50% or 60% of Australians’ median after-tax income.

Fact Check has assessed Bandt’s claim using the 50% threshold, which experts said was the most commonly used measure, including by institutions such as the OECD.

What does the Poverty in Australia report say?

Bandt’s website points to page 26 of the 2016 report, which features the pie charts below. 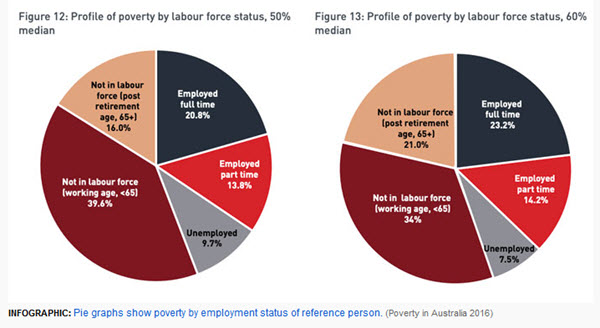 The charts suggest that 20.8% of all those in poverty — per the 50% threshold — are employed full time.

This information is also displayed in a table earlier in the report, which shows 622,700 of the almost 3 million people in poverty were employed full time.

In the 2018 report, a similar table shows the proportion of people in poverty who were employed full time had grown to 25.9%, in line with Bandt’s claim.

Importantly, however, footnotes in both reports make clear these statistics “refer to the characteristic of the reference person in the household”, which means the employment status of one person has been assigned to every person in that household.

What is a ‘reference person’?

Analysis of income data is usually carried out according to households. This is true of poverty line measures, where the median income of households, rather than that of individuals, is used.

“It is usually most appropriate to examine household income when considering economic well being because of the sharing that occurs between members of households,” the ABS explains in its user guide to the Survey of Income and Housing.

In order to analyse the characteristics of people within households, the ABS selects a single “reference person” for each household.

The reference person for each household is chosen by applying a number of selection criteria to all household members aged 15 and over.

Each member of the household, including children, is then assigned the characteristic of this reference person.

This would mean that unemployed and part-time workers in a household would be characterised by the full-time employment status of the reference person of that household.

Experts noted, however, that in most cases the reference person would be the main breadwinner in a household.

Why does the Poverty in Australia report use the reference person?

Professor Peter Saunders, one of the authors of the report, told Fact Check that because poverty was measured on a household — rather than individual — basis, there was no simple way of classifying households by their labour force status.

He said while it would be possible to look at the labour force status of all individuals living in poverty it would not be consistent with the approach used in other parts of the Poverty in Australia report.

“The approach we use is, thus, not ideal, but is preferable to the alternatives in the context of the research and reports as a whole.”

Does the source support Bandt’s claim?

Fact Check asked experts if, based on the source, Bandt could make the claim that one in four people in poverty were working full time.

Professor Roger Wilkins, who is the deputy director of both the Melbourne Institute and the HILDA Survey program area at the University of Melbourne, agreed.

“What the report is saying is that for around 20 per cent of households in poverty the reference person is employed full time,” he said.

But they’re very likely to be families with other people who aren’t working so you really need the data produced in a different way to make a statement about the proportion of people in poverty who are working full time.

Saunders, meanwhile, confirmed the proportion of people working full time as recorded in the reports included all people in a household where the reference person was employed full time. This would, therefore, capture children, as well as any adults not working full time.

Redmond told Fact Check that to come up with the correct figure for Bandt’s claim would require an analysis of all working-age adults in poverty to find the proportion who were working full time.

Fact Check asked three experts to do this.

Professor Alan Duncan, the director of the Bankwest Curtin Economics Centre at Curtin University, responded: “According to our best estimates, 12.6 per cent of people who are in poverty are working full time. That analysis is based on what we think is the most appropriate measure, which is all adults grouped using individual labour force status.”

Dr Nicolas Herault, of the University of Melbourne, put the figure at 15.6%.

Why do these numbers differ?

Duncan told Fact Check there were many decisions and assumptions underpinning poverty analysis.

“For example: whether or not you equivalise the income to take into account different household size, who you choose to include or exclude from the analysis, whether or not you exclude older aged people, how you cut extreme incomes out — there are loads of different assumptions,” he explained.

“Very rarely would you get a number that is exactly balanced.”

In any case, on a measure of working age people living in poverty, Bandt’s claim that one in four are working full time is overblown

Over-blown or not, 1/4 of households-with someone working full time-living in poverty is a NATIONAL DISGRACE. I fear it will get worse when the next round of penalty rate cuts go through.

Whether it’s 1/4 or the 1/6 figure that the fact-checkers suggest, it’s still clearly a problem. I think that it’s cheapening the fact-checking process to be putting a big red “overblown” tag on a story that is important and within an order of magnitude of correct, and still a story even when the fact-checker’s figures are used in place of the original statement.

I think that you should only be red-flagging articles like this if the correction changes the significance of the claim or the conclusion.

“Fact Check invited three experts to conduct an analysis based on the individual labour force status of working-age adults living in poverty, which showed that around 12-16% worked full time (which would translate to between one in six and one in eight).”
The figure quoted by Mr Bandt from his source was higher than a figure calculated by another source. The conclusion from either figure is that a very large number of working-age adults are living in poverty despite working full-time. How does the discrepancy between the two figures matter when either one points to a serious problem? If I were working underpaid in a petrol station or working full-time for a “rideshare” pseudo-taxi outfit and living in poverty would I care about the discrepancy between two quoted percentages? Crikey, what is your agenda? I need to get that clear because my subscription becomes due in the next few days.

Can we fact check how many times the RMIT and fellow travellers have fact checked progressives vs conservatives. JFC – this was something AB said before the election which in any event is sort of true, and likely to become truer. Maybe fact check Frydenberg on his ‘strong economy’ claim.

Well that would fry their brains!

The “working poor” is so accepted in the UK that it attracts specially tax credits – a government subsidy to blood sucking employers.
In the US it is the norm for a substantial proportion of the population hence the obligatory tips one pays to the minimum wage employees in service industries.
This is what the Rodent had wet dreams about with SerfChoiceless, the beggaring of the working class.
Mr Smug McShouty seems determined to complete that project of his atavar.