Mapping electorates by wealth gives us a fascinating picture of who voted against Labor and what that means for the next election.

In the aftermath of the election, the post-mortem of Labor’s historic loss is in full swing. Some have pointed to the effective scare campaign run by vested interests. Others blame the large target, substantive policy agenda of the Labor party for putting off voters. Many more still highlight Bill Shorten’s enduring unpopularity as the key reason for failure.

However, the most interesting analysis appears to be occurring within the newly minted Labor leadership. In his opening address as opposition leader Anthony Albanese has signalled a pitch to wealthy voters, saying that the party has to “articulate a vision for how we increase wealth and not just share wealth”. It appears from this statement that Albanese believes that part of the reason Labor lost is that wealthy voters found their previous platform unappealing.

This would be a reasonable conclusion to draw, except for one key problem — it’s not true.

If we map the primary vote results against a number of key factors, a very different picture begins to emerge, and it has important ramifications for the next election.

Beginning with the wealthy, I decided to map the results against the top 20 wealthiest electorates, from highest to lowest, according to median house prices. 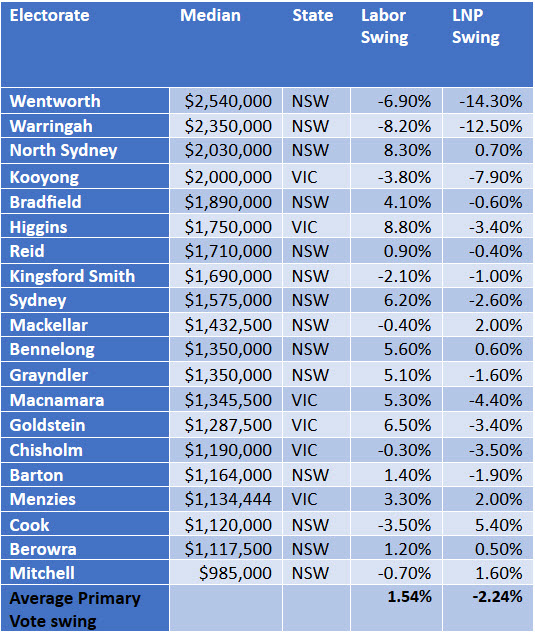 If anything, it seems that Labour’s message was marginally well received, or at least benign, in the wealthy electorates. On average, Labor received a swing of 1.54% towards them while the wealthy swung away from the LNP by 2.24%. The Coalition only managed to gain at the expense of Labor in four of the 20 seats, in Reid, Mackellar, Cook and Mitchell. Arguably, Labor’s platform, message and leadership didn’t scare off voters in these affluent areas.

Housing isn’t just a useful metric for the wealthy. By using rental stress, or the number of renters who report that they regularly struggle to meet housing costs, to map electoral outcomes, we can see how well Labor’s message was received by those who are most vulnerable in the housing market. 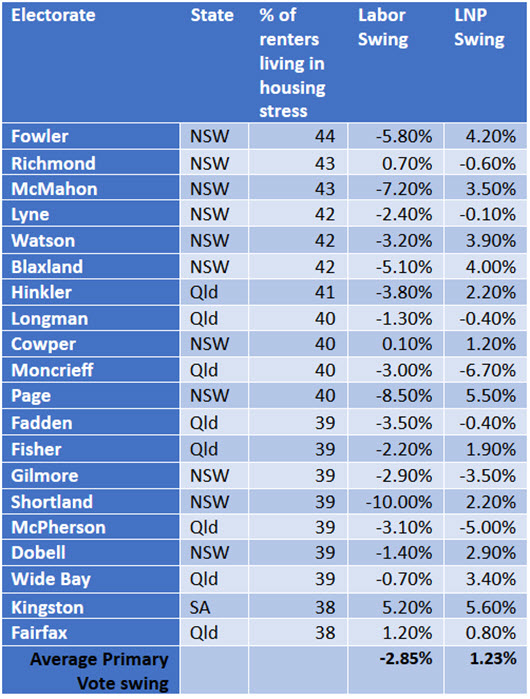 A very different picture starts to emerge when we consider the top 20 electorates for rental stress. Here, the LNP makes gains at the expense of Labor’s primary vote in 12 out of the 20 electorates, with an average primary vote swing of 1.23% towards the government. Labor suffered a 2.85% swing against them in these seats, including in Longman where Labor’s Susan Lamb lost her seat to incoming LNP candidate Terry Young.

Another interesting issue is median income. Given Labor’s policies around raising the minimum wage, it is logical to think that those who earn the least would have the most to gain from their policies. Yet when we map the primary vote against median weekly income, we again see swings against Labor. 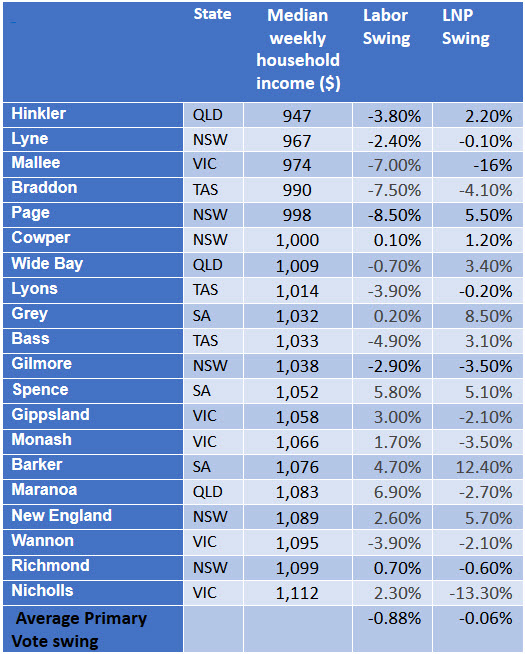 Interestingly, in this circumstance the LNP also suffered a minor swing against them. The question then becomes: who did appeal to these voters? The answer: Clive Palmer’s United Australia Party and Pauline Hanson’s One Nation.

When we look at the combined vote for these parties that ran on an anti-political platform, these issues become a key factor in the election outcome.

While the average vote for UAP and PHON is 2% in the top 20 wealthiest electorates, those at the lower end of the socio-economic scale recorded much higher votes towards the minor parties. In 16 of the 20 electorates that experienced the highest amounts of rental stress, the largest swings went towards UAP and ON. Their combined average swing across these electorates was 5.48%, far outstripping either major party.

Similarly, in the electorates with the lowest median weekly income, the average swing was 6.47% towards the anti-political parties.

Most importantly for Labor, while these parties never achieved a significant majority that would elevate them to either houses of parliament, their preferences almost exclusively flowed towards to the Coalition.

If Albanese is serious about winning the next federal election then he would do well to focus less on the wealthiest Australians and figure out a way to speak to the issues which affect disaffected voters most — affordable housing and secure employment.

Shirley Jackson is a political economist and freelance commentator who has previously been published in The Age, ABC News, The Guardian and The Conversation.

Do you think Labor is wrong to focus on wealthy voters? Write to [email protected] with your full name and let us know.

AusPostScare and NDIScare — harbingers of an election campaign to come?

In the light of the above, would be interesting to plot the voting patterns against education levels (which can be connected with higher income, to some extent). In the US, the positive connection between higher levels of education and voting progressive is well-established. Are we heading in the same direction?

If so, expect the government to continue its hostility towards universities.

Regardless of your political persuasion, it’s easy to see there is a fundamental flaw in Jackson’s article. Albanese did not say Labor now needs to focus on the wealthy. It seems odd to interpret his statement – “we have to articulate a vision of how we increase wealth, not just share wealth” – as somehow focusing on the already wealthy.

Rather, it unambiguously states that Labor needs a vision to increase the wealth of all voters, ie not just sharing the wealth. The statistics Jackson quotes show the fear campaign worked best on lower paid workers, who either did not believe or did not understand Shorten’s policies, but feared they would be worse off if Labor were elected.

Completely agree, Rob Gerrand. Albanese talked about the need to create wealth. He argued that Labor’s messages on tax policy and redistribution had alienated many middle income earners who felt they were unfairly targeted by Labor’s policies. And he talked of the need to support those who aren’t wealthy but aspire to do better. The article is based on a misreading of what Albanese said, not once but several times since the election.

‘Anthony Albanese has signalled a pitch to wealthy voters, saying that the party has to “articulate a vision for how we increase wealth and not just share wealth”. ‘
Given that this is quoted from a report in The Australian the writer of this article did not check if she was being mislead.
Other commentators here have clearly outlined what Albanese actually said.
The lies and misrepresentations by the anti Labor forces focused on confusing the less informed and vulnerable voters in away that they feared losing what they had as well as any hope or aspiration of anything they might have expected to get in the future.
Unfortunately, the quality of this article has been disappointing.

Agree Rob. Furthermore, Albanese’s statement is consistent, in my view, with leaving the policies they took to the electorate pretty much as they are (with a grand-fathering and a cap here, an alternative to a mine there). Not that they’ll want that to be the perception, and of course circumstances will change. But it, Albanese’s statement, is about the articulation of vision and the altering of perception.

No, no, no, such a statement by Albanese is absurd when looked at in context – except for a continuation of the Keating/Howard aim of helping the non-rich pay to enrich the already rich.

Credit Suisse’s annual Global Wealth Report stated in Nov ’17 that there are now almost 3,000 Australian “ultra-high net worth individuals” with net assets of at least $US50 million ($64 million), a 29% increase from a year ago – the sixth highest number in the world. That clique is projected to grow by 7.9% per annum over the next five years, to 4400 people by 2022. What wages worker has an annual wage increase of that scale?

“Amazing opportunities provided by Australia over the last 25 years” have not been wasted on the young adult generation. Baby-boomers – the “locust generation” pocketed the windfall gains from the massive leveraging of Australia’s conservative balance sheets of the 50s, leaving today’s young adults deprived of the most essential of adulthood – a good job within reasonable commute of an affordable dwelling.

Albanese, like shorten, is looking after the locust generation.

The poorer areas are also where the Christian fundamentalist churches are strongest.
The disadvantaged have also had their racism appealed to by the Coalition, Hanson et al.
It is always easy to tell the disadvantaged that they are in their parlous position because even more disadvantaged “others”, Indigenous, refugees etc are the cause of their misery rather than the wealthy greedmongers who are the real beneficiaries. It’s the oldest trick in the book for the Greedy Powerful and their Coalition lickspittles.

Those tables appear to show Primary vote swings rather than 2PP swings?

I realise that this may seem harsh, but I am reminded of the words of the Rev.Charles Kingsley, 19th century author and founder of the Christian Socialists.Frustrated at the lack of support his work received from the poorer people in British society, he penned these famous words.”They are rightly called the deserving poor, because they work scab, vote Conservative, and richly deserve all the hardships and indignities that are thrust upon them”.

Rather as the 19thC US railway robber baron Jay Gould pointed out – “I can easily hire enough of the working class to protect me against the rest”.
Or as the words of the Nu International sung at ‘Labor’ annual conferences put it “The Working Class can Kiss my Arse, I got a Safe Seat at last”.