The success of the European Greens would seem to be the measure of a deeper process underway — one the Australian Greens should grab onto with both hands.

This is the second instalment of a two-part series on the future of the Green movement. Read part one here.

When the Australian Greens were having a year from hell in 2018 — with a series of candidates cut loose in the Victorian election for various infractions, the Batman/Cooper disaster and the NSW branch at war — the media began to dust off the “new Australian Democrats” line. It was an easy line to take. Though the Dems fell apart because they were in fact two parties in one, it had the appearance of a series of personal wars driven by ambition and moralising.

Fast forward and all the same elements were there for the Greens. Having been stuck at 8-10% for more than a decade, the moralising and individualism that bedevilled the Democrats returned in a supercharged fashion, with a new morality around bullying, offensive remarks on social media and the like. In New South Wales, the struggle between factions had a state MP denounce her own party in parliament — all the while being heckled by members of a rival faction from the public gallery. And Labor’s leftward shift threatened to take back at least some of the party’s voters.

But as the Australian Greens looked to be sinking into the ground, on the other side of the world the tide had finally and decisively turned. In the German state elections of 2018, both the Christian Democrats (CDU) and the Social Democrats (SPD) fell sharply. Part of this was due to the rise of the nationalist right Alternative for Germany (AfD) which became the main story. But the Greens were the other beneficiaries, and their rise was arguably the more important story.

Two things are striking. The first is the uniformity of these results, which suggests that a social-political shift is on. The second is the sudden take-off of the vote. From their initial 1% vote in 1980, the Greens climbed to 7% by the late 1990s, and to around 10% by 2007. At that point, the vote stalled. The current sudden jump is their greatest gain after their longest stasis, a non-linear progression.

The voters of the main parties appear to have peeled off to both left and right in both directions. The CDU/CSU coalition has lost one section of voters to AfD for being allegedly too multicultural and pro-migrant; but others have gone to the Greens for the CDU/CSU being too weak in affirming a liberal vision. The SPD has lost voters to the Greens because it has been consumed with factional infighting, a split over the question of “grand coalitions” with the CDU/CSU. The SPD right are enthusiastic about these; the left believes they have turned the SPD into an adjunct of the CDU. The breaking of the class-legitimacy claim of both parties recast political affiliations.

At the same time as this occurred, the Greens had undergone their own process of internal reform to resolve factional conflict, changing decision-making processes, and in some regions appointing dual leaderships, for gender equality and factional balance. This included a greater and more visible involvement in public protest — on both environmental and social issues, such as refugees — while at the same time maintaining full participation in the processes of government.

The result has been that the Greens have come to be seen as the principal “other” to the AfD, and gained increased support in turn. In doing so, they have managed to break out of their knowledge class/old counterculture core, and draw in adjacent groups of professionals and migrant citizens. There are analogies with what the Greens have done in the division of Melbourne here. But in Germany this has occurred on a regional, national and European basis.

The success of the Greens would seem to be the measure of a deeper process underway: the forward march of the knowledge class as the only unified social force around. Across Europe, the old parties are cracking up because their classes are breaking in two: a liberal metropolitan bourgeoisie v a regional and parochial middle class on the right; a metropolitan and migrant working class v a nativist regional and non-mobile one. The Greens, in the context of Europe, can thus take sections of these old classes and represent them in a way they feel their old parties no longer can.

There are a lot of ifs and buts to this, especially in the Australian context. The crack-up of old parties can occur in both first-past-the-post systems and proportional ones; exhaustive preferential systems support dying parties to the last gasp. Though the German Greens have a fairly wide ideological spread — the Green president of Baden-Württemberg state is a “Green conservative” who, as a Maoist insurgent, infiltrated the party in the 1980s — there is a widespread understanding that its economics must be social democratic. Residual notions of class solidarity limit fragmentation along “rights” discourse lines — the endless spread of notions of bullying, etc.

But the notion of the Green “fundis” that the party could take over broad representation of the working class — some vast umbrella group covering 60-70% of the population — is long gone, and parties such as Die Linke (The Left) have emerged. With the voting systems caveat in mind, there seems no reason to suppose that circumstances could give the Australian Greens a similar opportunity for sudden expansion, rather than incremental gain off a static 9-11% base. That, in turn, raises a host of important questions for the Australian Greens about their own party form, restructuring, activist projection and relations with Labor, as the new winter sets in.

The Merkel victory that wasn’t 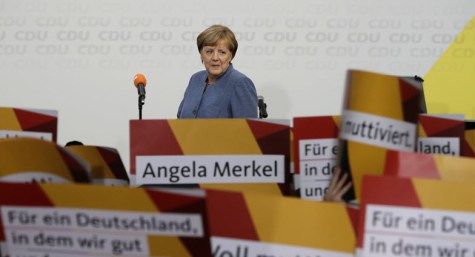 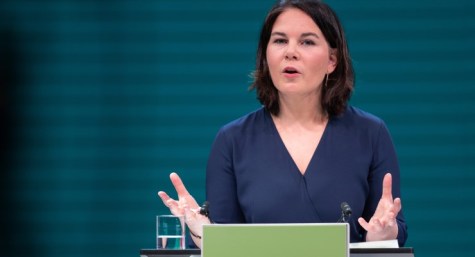 I was looking forward to this sequel, but it’s hard to know what to take away from it. Should the Greens in Australia looking to a “class solidarity” that has given the German Greens more unity? What are the “Residual notions of class solidarity” found in Germany?
It’s hard to think of the kind of solidarity that a knowledge class might express which isn’t easily satirised as urban elitism. The Monthly? Soy latte?
In the end, the most plausible would be to rally for our remarkable “knowledge institutions”, such as ABC, libraries, galleries and universities. They are the infrastructure of our public realm.

If the Greens platform restricts itself to broad statements of principle, they can be interpreted on the fly as the occasion demands. This gives freedoms to the candidates as they make promises before an election, and then freedom to act as spokesmen for emerging environmental issues as mounting climate disasters bite. Here is one emerging opportunity for leadership that mainly the Greens can see, and an area that the public expects the Greens to competently address.

“important questions for the Australian Greens about their own party form, restructuring, activist projection and relations with Labor”

But no questions about the formulation of an over-arching narrative? At what point does this become the responsibility of the Greens rather than or as well as Labor?

“Some sort of narrative, no matter how minimal, has to be found.” May 30.

“The long arc of the Whitlam coalition/compact is concluded.” A poetic and moving introduction. What comes next?

The matter seems urgent since, while recent polls may have seen the Euro Greens become the new “other” to the right, nonetheless many more votes appear to have gone from the CDU-SPD centre to the right than to the Greens, on the figures you provide, especially the German ones, but even the Euro parliament ones. Meanwhile, back here, there is the small matter of who won the election.

German society has been less individualized over the last 30 years. Welfare is still collective to a degree – substantial public housing, state pension not super, health system with less gaps etc. Thus less atomization of people doing politics….
The solidarity of the knowledge classes tends to be around abstract values felt as immediate and urgent – climate change, refugees, better cities, etc

Sorry the above is a reply to Paraguays comment

It think the abstract nature of those ideas is a weakness. It can make the Greens too easily dismissed as a party of virtue-signalling. Bonnie Honnig’s analysis of the “public thing” shows how solidarity can be catalysed around a common object. That’s why I think the defence of institutions, like “Aunty” ABC, should be a useful focus for countering the fragmentation of identity politics.

The separation of the Greens from Labor was the prelude to the end of the Whitlam arc. The Greens have a fairly solid ideology and narrative; they don’t have to ask where they stand on a whole range of things. It’s compared to them that Labor has problems

Although it’s not the main point of the article, and mostly of historical interest, I’d be interested in a longer explanation of your comment about the Democrats being two parties in one

I interpreted that statement as the Democrats being a party that drew in dissatisfied Liberal and dissatisfied Labor types and the underlying values that both of these groups bring with them. As such, the Democrats had a “Left” wing (think Andrew Bartlett, Natasha Stott-Despoja) and a “Right” wing (think Meg Lees) – both of these wings had opposing ideological frameworks which led to them fighting each other rather than the bastards they originally sought to keep honest.

Now, how this relates to the Greens is that it asks the question, as the party shifts its strategy of targeting gentrifying working class areas to targeting old money blue-ribbon areas, if the Left wing of the Greens will be able to reconcile their differences with the more economically Right wing elements that their changing strategy will inadvertently bring in; or whether these two wings will just slug it out against each other to the party’s demise?

The Democrats were a composite of the Australia party – a proto-greens outfit from the late 60s withbcosmopolitan values, and a centrist faction emerging from liberalism and with an industrial development, if not, protectionist, agenda (e.g. John Siddons in early days, Andrew Murray later). That held until the Greens came on the scene as a national outfit.

The Greens need to learn that in amongst the Pauline Hansons and Fraser Annings, there’s a sizeable chunk of people with objective, genuine and justifiable concerns about the economic, environmental and quality-of-life impacts from large numbers of low-skill, low-paid immigrants.

A less charitable view is that many of these low rent right wingers have been happy to have someone else to blame for their reluctance to do something to help themselves. It’s a lot easier to schlepp along on a bit of welfare and a bit of casual work when you can tell yourself some bunch of others have pinched the new better jobs you deserve. Jobs that would require taking up that training package and getting out of the comfort zone. It’s more complex than that and genuinely hard for many. It doesn’t excuse taking it out on others by going all Pauline though.

There is a few percent in it. It is a concern, but if you accept the impacts of climate change are as real and scarry as most greens do, the few immigrants who settle in the areas that have the most concern about immigration, is nothing compared to the potential of climate dislocation.