Australia now has a real productivity crisis. So where's the wailing and gnashing of teeth that accompanied the fake crisis claimed to have happened under Labor?

In a damning report, the Productivity Commission’s (PC) latest examination of the economy reveals that Australia has endured six years of poor productivity growth and wage stagnation, and slumping investment augurs poorly for a recovery any time soon.

The Commission’s 2019 Productivity Bulletin is an alarming itemisation of policy failure since 2012 that now sees productivity levels falling in crucial industries and no end in sight to the wage stagnation that has frustrated workers since 2013.

It confirms that the labour productivity (LP) surge under the Rudd-Gillard governments has been replaced with an extended period of declining productivity under the current government, with LP not merely well below long-run levels but falling every year between 2015 and 2018. 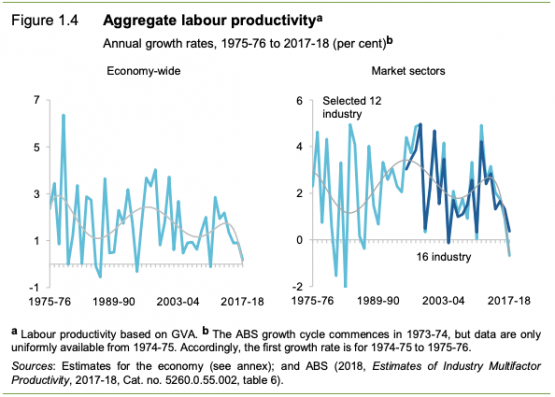 The problems described by the PC are particularly acute in the market sector of the economy, where LP went backwards in 2017-18, with the worst sectors being agriculture (likely culprit: the drought), construction, utilities and transport and logistics.

Manufacturing and the services sector were the best LP performers in 2017-18, both managing 3.7% growth. Multi-factor productivity (MFP) has followed the same trajectory of declining during the late Howard years, recovering in the period 2008-12, and then slumping again, with manufacturing and services again bucking the trend.

The Commission is also alarmed at a significant fall in both use of capital inputs and innovation — a word no longer spoken of in government after Malcolm Turnbull’s ill-fated embrace of it. The decline is notable, “especially so for investment in research and development,” the PC says, “where capital stocks are now falling, and even more so, new investment. Growth in R&D capital formation is even more subdued than capital formation generally, so that the R&D investment share of total investment has also fallen. The share of businesses that are innovators — which goes beyond R&D spending — is no longer growing.”

On wages, the Commission points out that:

While recent labour productivity growth has been sluggish by long-run standards, it has still been positive. However, this productivity improvement has not translated into comparable real wage growth over the period from 2011-12, with employees’ nominal hourly wages just keeping up with consumer prices.

This demolishes the persistent line from employer groups and the Coalition, that wages growth will pick up when productivity picks up — in fact any link between productivity growth and wages was severed years ago. 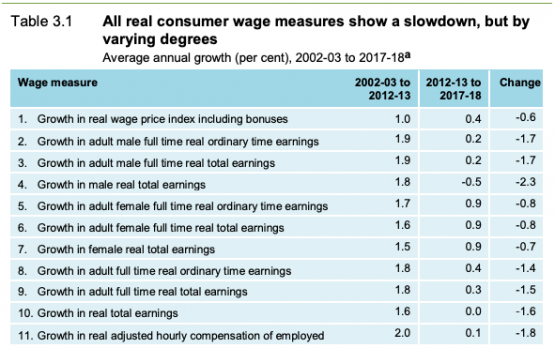 Nor does the PC buy the line advanced by some, including the Reserve Bank, that more than half a decade of wage stagnation is a kind of punishment for workers earning too many pay rises during the mining boom in the Howard years. This, at best, “may only partly explain recent wage and consumer price movements. Other countries have experienced low wage growth without any terms of trade shocks as their triggers. And real consumer wage growth in Australia has not shown any sign yet of a resurgence.”

It lists nine separate explanations for wage stagnation; interestingly, it declines to dismiss labour market regulation and the declining role of unions.

The union wage growth premium — an indication of union bargaining power — has not declined … That finding would not rule out weaker bargaining power by workers generally — whether represented by unions or not.

Accordingly, it offers no hope to workers that wage stagnation — predicted by Treasury and the government to vanish over the next two years — will end any time soon; the only comfort is that over the long-run, a widening gap between labour productivity and wages growth is “improbable”. That is, the PC thinks that it’s “improbable” that wage stagnation will get much worse over the course of the next decade. Australian workers must be weeping with gratitude.

What’s fascinating is that there was an alleged “productivity crisis” when Labor was in power, with acres of commentary in the media, economists and even the PC, often on the purported failings of the Gillard government and the Fair Work Act and how to fix them.

That “crisis”, it turned out, didn’t exist, as Treasury itself confessed years later. Not merely does it now appear that the Labor years saw a big lift in productivity from the depths created by WorkChoices (which Treasury famously warned Peter Costello would harm productivity) but that it has been replaced under the current government by a very real “productivity crisis” of the kind business and the commentariat whipped itself into a frenzy over eight years ago — and one with no end in sight.

And what’s that sound coming from business and the media? Crickets.