Once again, the AFR Rich List misses the point

The Australian Financial Review thinks that its annual Rich List celebrates Australia's 'opportunity society'. In reality it is contemptuous of the struggles of regular Australians.

Overall, the AFR reckons the rich listers “create wealth, jobs and more prosperous futures for many others”. It goes in to bat for the those “damned as one percenters”, arguing that “less than one in seven Rich Listers come from inherited wealth”. Well that’s roughly 28, so let’s count some of them: Anthony Pratt (the richest); Gina Rinehart (number two) and daughter Bianca Rinehart; Lachlan Murdoch, James Murdoch and Prudence MacLeod (Rupert’s first born); and who can forget James Packer.

The list was started in 1983, when the Hawke-Keating government came to power and the country was emerging from recession. It was originally in BRW magazine, not the AFR. It was initially a replication of the Forbes 400 list, which was making waves in the early ’80s. The founding editor and gusher-in-chief was “Whispering” Bob Gottliebsen, now a gushing columnist for The Australian.

The likes of Alan Bond, Christopher Skase, Robert Holmes a’Court and other shonks of the ’80s appeared on the list… and subsequently disappeared as their paper castles collapsed.

This continues to be the major failing of lists like this (and the many others inspired by it — richest sports people, young rich list, richest entertainers, etc). They are largely advertising vehicles; a way for fading papers to keep in touch with the top end of town.

Most Australians couldn’t give a toss about the rich list, it is merely a way for the AFR — and The Australian, which hired journalist John Stenholt away from compiling the AFR list do one for the Murdoch-owned broadsheet earlier this year — to ingratiate itself with wealthy individuals and families and attract lucrative ad contracts.

The reality is that as successful as many of the 200 are (with a minimum fortune of $472 million was the qualifying amount for this year’s effort) they do not stack up against the companies that affect Australians’ lives: BHP Group, Rio Tinto, Woolworths, Coles, Wesfarmers, the big four banks, department chains, financial groups, and others.

The AFR finds itself at odds with most regular Australians. Millions feel poorer because wages and incomes are stagnant. House prices may be hurting, but millions of Australians are impacted not by falling prices, but because they still can’t afford to buy or are struggling to rent. Millions have been hurt by incompetent management of their super and retirement funds, which the AFR failed to acknowledge for years in opposing the recent Hayne royal commission.

Meanwhile, most of the rich list have made their way by playing the odds with only a small margin of risk. All claim to believe in competition and free enterprise, but are not averse to lobbying governments at all levels for advantage, or to restrict the activities of rivals. Media moguls like Kerry Stokes, Bruce Gordon and Lachlan Murdoch are prime examples of those who have lobbied their way to fortunes, while blaming the likes of the ABC and foreign groups like Facebook or Google for the ills and woes faced by their legacy media businesses and their personal power.

A stand out in this regard is James Packer, who sold much of his stake in Crown Resorts on Thursday to Lawrence Ho’s Melco company, his former partner in Macau. The Packers have employed a long list of fixers to help get their way in media, property and casinos. The Barangaroo casino project in Sydney was a prime example, as Packer and Crown got their way on the size and location of the project. Now the NSW government is facing the very real prospect that a foreign company will eventually control the project and a prominent part of Sydney.

Careful readers of the AFR this week will notice that rich lister Frank Lowy is now living in Israel, not Sydney’s Point Piper. Having sold his family’s control of the Westfield shopping centres in Australasia and globally, our seventh wealthiest person ($8.56 billion) is gone.

An immigrant success who has abandoned the AFR’s so called “opportunity society” and returned home. 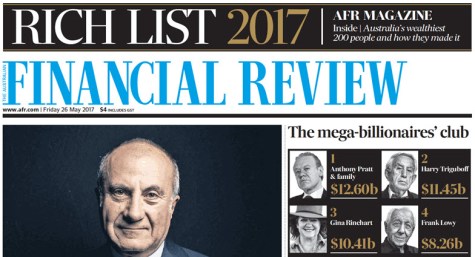 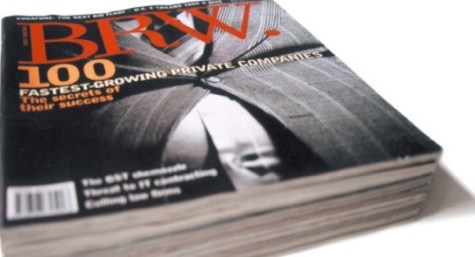 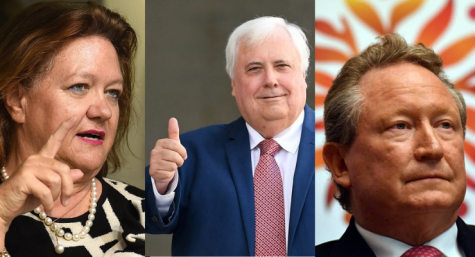 Has the AFR ever been accused of journalism?

I think you’ll find that Skase’s first name was Christopher not Peter.

Did it never occur to the NSW government that Barangaroo may end up in foreign hands? Who would’ve thunk, wot a shock.

There has been mention of there being a hiccup with the Crown deal because there is a clause in the Barangaroo contract re Stanley the father not being allowed near the place. However James packer has never had too much trouble with getting around the govt.

It’s intersting how the right always talk of class warfare. Dear old Marx only talked of class struggle as I recall which is a very different thing.