A progressive alliance would be a much-needed boon for Labor.

Voters at the 2019 federal election were essentially left with a choice between conservative obstinance or centrist obstinance. In times of severe uncertainty, reluctant voters will elect what they’re used to. And, between 1996 and 2022, Australia will have lived through 20 years of conservative Coalition government shared between the Liberal and National parties.

The success of the Coalition

Since 1996, the ALP has only won one election outright. Yes, this is partly because of a global tendency towards a more hostile form of conservatism, but the Liberal Party has also historically benefited from something that Labor has long refused to consider: a coalition.

In fact, the Liberal Party has never formed government on its own. The Liberal Party’s predecessor — the United Australia Party — governed in its own right between 1931 and 1934, before establishing a coalition with the Country Party (later known as the National Party). The UAP was reformed into the modern incarnation of the Liberal Party by UAP leader Robert Menzies in 1945, and the Coalition has remained ever since.

Why form a coalition? The Coalition, as we know it today, was arranged as a way of ensuring government in the event of a hung parliament. The arrangement was first wielded at the 1946 federal election, at which the Coalition only narrowly lost to Labor. Off the back of this overall positive result for the newly formed arrangement, Menzies confidently took the Coalition to the 1949 election and won.

Is this an option for Labor?

Labor has won government plenty of times, but a lot has changed since it last won a majority in 2007. Once upon a time, the ALP was inseparable from the improvement of workers’ rights. Today, the ALP is the party of focus groups and opinion polls.

Labor has drifted to the centre. It has developed a wishy-washy view of raising Newstart, taken insufficient action on addressing impoverished funding for public schools, and ignored best advice on developing a Green New Deal that includes a jobs guarantee in order to transition to renewables in a way that is fair to workers’ job security. Meanwhile, poor and working-class Australians face a gamut of threats.

Labor has alienated large sections of its base, and this has cultivated a meadow of right-wing micro-parties (One Nation, Clive Palmer’s conspicuously named UAP, and Cory Bernardi’s Australian Conservatives) whose preferences create a daisy chain right back to the Coalition.

Much like the Greens and the Nationals, it is entirely possible Labor will never again form government outright. Between 2007 and 2019, the Labor and Liberal primary voter bases have largely flat-lined or declined.

This raises the question: should Labor fight fire with fire and form a coalition? Based on raw primary numbers, it is certainly an idea worthy of serious consideration.

Forming a coalition is not a sign of failure. In Aotearoa (New Zealand) neither of the two major parties has won an outright majority after proportional representation was introduced in 1996. Interestingly, both the major parties in Aotearoa have since formed coalitions and governed at different times. The configuration of the coalitions on both sides of NZ politics is not historically static. The centrist New Zealand First Party has formed governing coalitions with both major parties at different elections.

At the 2017 federal election, a three-way coalition was formed between the Greens, New Zealand First, and Jacinda Ardern’s Labour Party. This alliance has been able to introduce significant reforms — like abolishing New Zealand’s equivalent of NAPLAN, and laying the groundwork for a complete overhaul of the welfare system.

The obvious starting place would be a working alliance with the Australian Greens — a party formed by dissident Labor members in the 1980s. This could potentially create a left bloc that annexes the balance of power held by Centre Alliance, and draws power away from far-right parties like One Nation and Australian Conservatives.

A coalition with the Greens would be a much more pragmatic and effective way of distributing resources and maximising reach. It also brings more voices to the table and prevents a party’s policies becoming too insular — something the ALP desperately needs if it wants to reinvigorate the progressive vote as opposed to rusting itself onto the centre.

The Greens and Labor did have a formal alliance between 2010 and 2013 in the Gillard minority government. However, the alliance was ended by the Greens when the ALP failed to take action on taxing multinational mining companies.

Now, as the Coalition government names its new ministry, the Labor Party has continued looking inward for direction and picking fights with the Greens on the internet. 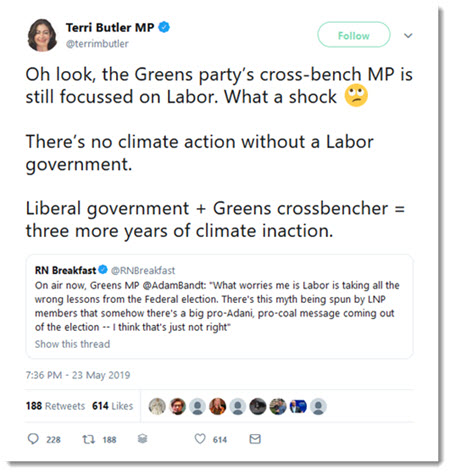 The Australian Greens are not perfect by any means, but the ALP could learn something from the grassroots community that has informed Greens policy: raise Newstart, abolish the robodebt scheme, and defund private and independent schools in order to return billions of dollars of funding to resources-poor public education. Not to mention the raft of ideas that the two parties agree on.

If the ALP is serious about ever being in government again, it needs to look at a coalition as a serious possibility. Labor should know better than anyone that there is power in a union.

65 thoughts on “The case for a Labor-Greens coalition”