Midnight Oil's first show since 2017 reflected the anger of the left — past, present and future.

As the swing took place and the reality set in last Saturday night, the blame game took on its most fervent round yet. Among those to blame — depending on who you asked — were Greens voters, non-voters, independent voters, one-policy party voters, Queenslanders, boomers and just about every other group one could think of. Come Monday, however, most progressives were out of their melancholy stupor and determined to bring the fight for the obstacles that will come between now and the next election.

This, of course, applied just as much to the older generation of lefties as it did to the younger one. And it was on full display at Midnight Oil’s show last night. 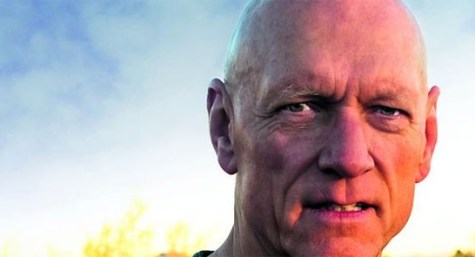 The power and the passion of Peter Garrett

After wrapping a gargantuan world tour in 2017, the veteran band announced late last year that they would once again tour through Europe in mid-2019. Prior to that, however, the band booked two warm-up shows: one in Canberra on Reconciliation Day, and one at Anita’s Theatre in the northern Illawarra suburb Thirroul (guitarist/keyboardist Jim Moginie is a local). The latter would mark the band’s first live performance since November 2017, not to mention the first since the 2019 election.

There’s no real rust to speak of when the five of them are on stage together. Peter Garrett is still dancing like his soul is on fire, limbs akimbo and in sync with a completely different drum to that of Rob Hirst. While we’re on the subject, the water-tank-bashing drummer remains the band’s engine room. He drives every last song home, arms like tree trunks and perennially awash with farmer’s tan. Between them, the more soft-spoken members of the band — Moginie, bassist Bones Hillman and guitarist Martin Rotsey — hold down the fort with the same sort of aplomb that scored such rapturous reviews through the band’s 2017 run.

What was different, then, about the band’s post-election performance? The answer lay in the details. Second cab off the rank, for instance, was “Knife’s Edge” — a deep cut that hadn’t been played live since 1986. Its refrain? “Word crimes/Bitter lies/Bitter crimes/Government lies.” Subtle.

Later, the band dedicate a rendition of “Antartica” to the late Bob Hawke — who, lest we forget, once ran the very political party Garret was a member of for nearly nine years.

Moginie dons a t-shirt with the succinct pun “FRACK OFF!” writ large across the chest. Garrett, originally in a flannelette long-sleeve, reveals a black shirt underneath halfway through the show. Its text, although wordier than Moginie’s, makes just as resolute a point: “TO SIN BY SILENCE WHEN WE SHOULD PROTEST MAKES COWARDS OUT OF MEN”. It’s a quote attributed to the turn-of-the-century century poet Ella Wheeler Wilcox — 100 years on, its core point remains as true as ever.

It’s curious to watch a band as forthright with their politics as the Oils making these statements in an affluent suburb like Thirroul. Wollongong, sure — that’s a steel-grated, working class city if ever there was one. The Oils’ performance at the city’s Entertainment Centre on The Great Circle tour was one for the ages, and the Cunningham electorate was a Labor victory over the election, too, with MP Sharon Bird re-elected for a fifth time.

Even so, one of Garrett’s many speeches to the audience about the dangers of the newly-elected majority government was met with a disgruntled “PLAY A SONG!” from some curmudgeon off to the side. It says a lot about the environment within which the band found themselves. (Sidebar: the cognitive dissonance of being an apolitical fan of Midnight Oil’s music is practically Olympic level.)

Yes, the set is tweaked to accommodate for the current climate with which the band are re-entering. “We are still scratching our heads at the scale of the challenge,” Garret says at one point. What’s pointed about the show overall, however, is how so many of the issues addressed within the band’s music — from the ’80s, into the ’90s and topping off in the early 2000s with Capricornia — still ring as true today.

The time has come indeed — rather, it’s been, gone and come back.

Baby, we were born to run (for political office)

Who are the big winners from the One Direction tidal wave?

Never seen them live, very remiss of me….a new item for the bucket list (along with seeing the new VR documentary Thin Ice with Tim Jarvis AM…heard him interviewed an ABC radio yesterday and was just stunned by the courage of the man and the scope/technicality of the 20 minute movie).

They were good live 35 years ago, now I imagine they’d be a bit tired…I know I am.
Thin Ice otoh , sounds like it’s worth a look.

I saw the many times 35-25 years ago and then again at Hanging Rock for the 3rd/4th last show of the tour. As anyone who saw them will attest, they are far from tired. I was astounded how tight they were musically and how strong the passion still burns. If ya get a chance to see them, do it, it might light a spark..

‘been, gone and come back’? Nah, never left us, issues seem same, same but more so. Of course the audience in Thirroul wanted songs – spoken words are cheap – they paid to hear the music. Also, remember, even the northern suburbs are suburbs of Wollongong.

How does that guy sleep while his reds are burning?

The politics of envy