While the announcement of David Speers as the next host of Insiders was a surprise to some, it makes sense as Sky News faces an uncertain future.

David Speers is moving from Sky News to host Insiders on ABC, showing there’s life (and credibility) in free-to-air TV yet. His decision underlines the still very relevant fact that there is nothing like the lure of free-to-air’s big audiences to attract talented media mavens.

Speers’ move has shocked a lot of people in the media, but it shouldn’t have (in fact, he was on Crikey’s list of predictions for replacement hosts back in March). It is also the latest in a long history of similar moves.

Alan Reid (AKA the Red Fox), the great political journalist from The Bulletin was also Nine’s political correspondent and interviewer when the company was owned by the Packer family in the ’50s through to the ’80s. Laurie Oakes continued the trend back in the late ’70s and early ’80s, moving from The Herald Sun (when it wasn’t owned by News Corp) to Ten and then to Nine where he dominated Australian political broadcasting.

After Oakes retired, the ABC’s Chris Uhlmann moved to Nine to replace him. Notable other moves include Laura Tingle’s partial move from The Australian Financial Review to ABC’s 7.30. She still writes a weekly column in the weekend edition of the AFR. Andrew Probyn moved from The West Australian to 7.30 and then ABC News where he is now chief political correspondent. ABC News host Juanita Phillips is a former Sky presenter who found her way to the ABC and has flourished.

Of all the media outlets, the ABC is the only one with the credibility to sustain people like Cassidy, Tingle, Probyn and now Speers. This is not being negative about the efforts of Mark Riley at Seven, Chris Uhlmann at Nine or Peter van Onselen at Ten.

But of all the moves since Oakes, Speers’ is the most telling. He made his reputation (and, by extension that of Sky News) as a serious player in politics and political reporting in Australia. With the free Foxtel subscriptions to all federal parliamentarians, Speers and Sky News are all pervasive in Australian politics. Speers’ personal credibility did more to enhance the reputation of Sky News than that of the Sky After Dark gang of right-wing yellers — Peta Credlin, Paul Murray, Andrew Bolt, Chris Kenny, Alan Jones, Graham Richardson, Mark Latham, etc.

What will be interesting to watch is who replaces Speers. His offsider Kieran Gilbert would be a good choice. Other talented hosts such as Laura Jayes must also be wondering about their long-term futures at Sky as the network’s finances come under increasing pressures.

The audiences that Cassidy and his producers have built over the years at the ABC are huge in comparison to those of Sky News, even allowing for the lower (and falling) penetration of Foxtel in the Australian TV market. This year Insiders has regularly been watched by more than 600,000 nationally. The 90 minute post election program had a near record 886,000 people. That platform has not been available to Speers at Sky and most of his best work has gone unwatched by TV viewers (except, somewhat ironically, through the use of video clips in programs such as Insiders).

For all the talk of free-to-air TV falling audiences, the rise of streaming video, the depredations of Facebook and Google and disappearing ad revenues, free-to-air’s viewing numbers are still the largest and most easily measured audiences for any old or new media type. That measurement adds credibility to the programs, their hosts and the networks.

Another possible motivation for his move is the uncertain future for Sky News. Sky News is part of every Foxtel broadcast package and it is run by Australian News Channel, which is in turn owned by News Corp. Foxtel is losing subscribers, revenues, and profits and has had to be bailed out by News Corp with a $300 million loan to repay a debt due in April.

And there is a further irony from Speers move. For years News Corp media have undermined the ABC. They have supported Coalition governments cutting the ABC’s budgets by over $200 million, attacked ABC commentators and programs and hosts like Jon Faine, Tony Jones, Kerry O’Brien and Emma Alberici.

Now one of News Corp’s favoured talents is joining the enemy. It’s a message to News and Sky that Speers sees a greater future at the under-pressure ABC (which is facing more budget cuts from the Morrison government) and greater credibility than he would had he stayed put.

All the talk of a “miracle” win by Morrison in Saturday’s federal election (and the celebration of that victory by News Corp papers and Sky After Dark) clearly didn’t dissuade Speers from moving. That it came five days after the poll is itself an enormous political message.

How long before News’ attack dogs realise that and turn on Speers? 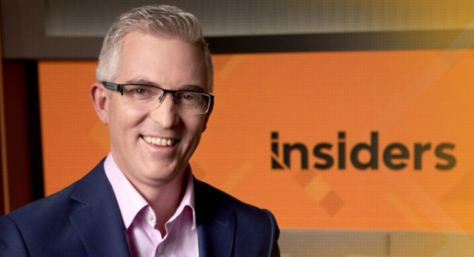 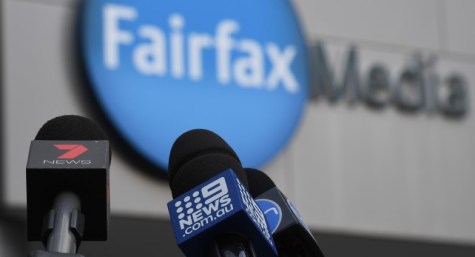 Speers’ credibility was always going to be capped on Sky as the odd man out in a loony bin of rabid right wing attach dogs.

And I wish the ABC would give Probyn back to the West Australian. He is the absolute doyen of reporting on politics as if it is a soap opera.

Oh well, that’s it for me, no more insiders on Sunday morning. Defer to Youtube instead. Give it a couple of years the ABC will be given to NewsCrap organisation to run. The LNP ambition of killing off the ABC will be complete. Big tax payer subsidies for that pernicious Rupert Murdoch and his fucking awful NewsCrap organisation. It’s what hard working Australian taxpayers deserve.

Bill…I agree wholeheartedly with your first sentence!
I wouldn’t get out of bed on a Sunday morning to watch ANYONE who ‘transferred’ from Skye News, including Speers. Once a RWNJ, always a RWNJ as far as I’m concerned.
So they might as well sell off the ABC, because it is becoming no use to anyone.
As I said yesterday…belatedly…what’s wrong with Emma Alberici? She was very good on Lateline.

I am not a subscriber to Foxtel and I’m only dimly aware of Speers’ work, but by merely being associated with the rabble that Sky News features as commentators, he is not going to win me over to his ‘talents’ easily. If you lie down with dogs… I shall desperately miss my Sunday morning political roundup which has been wonderful over the years. (except for the occasional appearance of Mr McGoo – Gerard Henderson – who regularly spoiled my kippers.)

The ABC was finished for me when Leigh Sales had Niki Sava do a hatchet job in Shorten before her interview with him. When he protested, the look of guilt on her face was astounding.