Get rid of megaphone diplomacy

Is it ok to tell lies during a political campaign? And what can be done to improve China-Australia relations? Crikey readers share their thoughts — and the worst political porky pies they saw over the course of the election.

Stephen Carisbrooke writes: Get rid of megaphone diplomacy. If there are things we disagree with China about we should discuss it privately with them. For example the Uighurs are a sensitive topic but it is an internal issue for China and we gain nothing by attacking them publicly. It doesn’t stop us having a strong point of view.

Another issue is freedom of navigation in the Pacific. The Americans are very keen for us to send our naval vessels into the area. That would be a crazy thing to do, like stirring up a wasp’s nest unnecessarily. It would have a serious effect on our relationship and for what benefit? Our forces are like toy ships in a bathtub to China and I can’t see any advantage in attempting to enhance our relationship with Trump.

On telling lies in political advertisements

Don Wormald writes: When the Trade Practices Act was first enacted politicians and political parties were specifically exempted from the false and misleading provisions of the act thus giving the pollies a licence to lie. As consumer legislation has been updated the exemption has carried forward. What’s good for the goose in this case is definitely not good for the gander. The exemption should be removed and the High Court sitting as the Court of Disputed Returns should be empowered to act and even declare a fresh poll in seats where it can be established untruthful advertising materially affected the result.  That would be interesting!

Doug Wait writes: All the media have mentioned the Chinese language signs, in the identical purple colour to that used by the AEC itself, posted up at polling booths all over Kooyong and Chisholm in Melbourne. Can I just mention that the signs were also placed in, at least, one other polling station outside those electorates. A similar sign was placed outside the Mount Pleasant Road Primary School in the electorate of Deakin. As this is an area with a significant Chinese population, I assumed given the colours, typeface and positioning of the sign next to the AEC banner on the fence of the school that it was an AEC sign designed to provide voting information to the Chinese community. 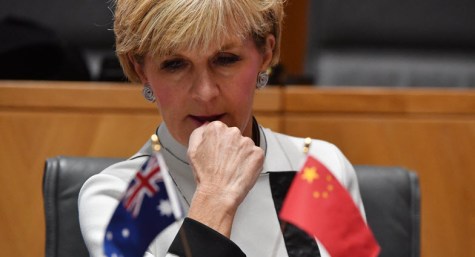