No wonder the real estate agents went against Labor

A glance at movements in share prices since the election shows who expects to do well out of the Coalition’s win. (Spoiler: it’s the finance sector.)

If you were one of the many who mistakenly believe that the Coalition handles the economy well, and if you had a premonition that they would win, you might have had a pre-election punt on the stock market.

Had you spread an investment of $100,000 across the market, perhaps in an ASX index fund, your portfolio on Tuesday would have been worth $101,920.  That’s a two per cent gain, probably only just covering brokerage.  You may have done better and had more fun by studying the racing form guide and going off to Randwick or Morphettville.

The stock exchange’s reaction was limp. There was no general corporate exuberance about a Coalition victory – in fact many business people, hoping that a change in government would finally bring in an economically responsible energy policy, were disappointed.

But if, before placing your bets on the stock market, you studied the Coalition’s track record, with the same care you may have studied a horse’s form, you would have realised that the Coalition is particularly well-disposed to the finance sector. You might have chosen a targeted portfolio — the two listed private health insurers, the big four banks, and a mortgage broking company. That would have given you a capital gain of $13,110. 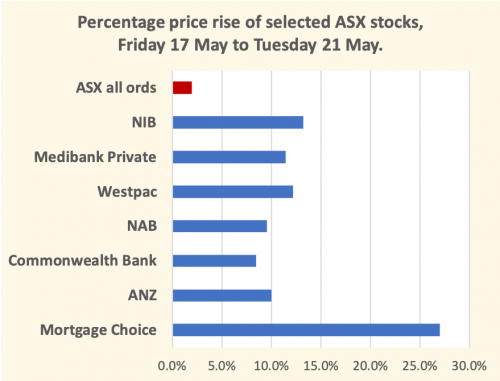 The contrast between the response of the share market in general (the small red bar in the chart) and that of the financial firms is stark. Those involved in the real value-creating economy — where people grow food, build houses, teach children, construct roads, transport people and goods, develop new technologies — saw nothing in the Coalition win. By contrast, those involved in what used to be called the “paper economy”, which economist Mariana Mazzucato  correctly calls the “value-extracting” economy, stand to benefit greatly from the Coalition’s win.

Every economy needs a finance sector to support the real economy. Beyond the basic intermediary functions of connecting borrowers and lenders, and facilitating transactions, the finance sector produces nothing of value in itself, however. Australia is already carrying the burden of a bloated finance sector, as we were so starkly reminded in the hearings and findings of the royal commission into the sector, and as is confirmed in our national accounts: as a percentage of the economy Australia’s finance sector is one of the world’s largest.

John Menadue, I, and others have written extensively on the waste incurred in the health insurance industry: as a financial intermediary it does at high cost and an annual $11 billion government subsidy what Medicare does much more efficiently and fairly at a lower cost. Health insurers are privileged and protected, however. They escaped the scrutiny of Justice Hayne’s commission: in fact, while almost every other sector of the Australian economy has been reviewed over recent times, it’s 50 years since health insurance has been subject to economic scrutiny (the 1969 Nimmo Report). Labor reasonably intended to subject the industry to a Productivity Commission review, but the Coalition victory has let them off the hook, and they may be expecting a few more handouts from the public purse. No wonder their share prices rose so strongly.

But the big winners have been the banks and others who stand to profit from housing speculation.  We might remember that when Justice Hayne’s report recommended banning mortgage brokers from taking trailing commissions, the Coalition caved in to political pressure. And in the election campaign the Real Estate Institute ran a hysterical and outrageously deceptive campaign  warning renters and property owners of the dire consequences of Labor’s plans to phase out negative gearing.

Just as housing prices are starting to become more affordable, it’s now clear that the Coalition doesn’t simply want to slow down the fall in prices (as Labor intended), but it wants to re-inflate the bubble. “Housing primed for rebound” was the euphoric headline in Wednesday’s Australian.

The Coalition’s plan to underwrite low-deposit loans to low-income first-home buyers will not only inflate house prices, but will also load those enticed into the scheme with decades of debt to pay off.  It’s as if they have learned nothing from the 2008 US housing crash that triggered the global financial crisis.

It’s now reasonably clear that, in order to compensate for six years of Coalition economic mismanagement, the Reserve Bank will have to reduce interest rates, in a hope to breathe some life into a sick economy. It’s questionable whether it will have any effect on the real economy, however. Corporations are already awash with liquidity: easier credit isn’t going to entice them to invest in an economy where debt-laden and underpaid workers are tightening their belts. Lower interest rates, however, may bring on some new housing supply, and that would be a good thing, for it may help deflate the bubble.

But neither the government or its backers in the real-estate business want a price-lowering increase in housing supply. That was their objection to Labor’s plan. They have no concern for affordability; rather they want high prices and high turnover, both of which contribute to the flow of lucrative commissions, and they want to attract speculators into buying existing housing to keep prices up. “Aspirational” investors, who unwisely bought into a rising and overheated market, must be protected — a strange policy position for a party that claims to believe in individual responsibility.

Asset speculation, be it in tulips, shares or housing, always ends in tears. I cannot predict when the bubble will finally deflate — no one can — but the longer the bubble goes on, the worse are the ultimate consequences. A cut in interest rates and the Coalition’s deposit scheme may have some effect in bolstering prices, but most probably it will be a dead cat bounce.

The wider problem, however, is that distortions in our tax system around capital gains and negative gearing have misdirected people’s savings into fuelling a housing bubble and enriched those who work in or draw dividends from a bloated and parasitic finance sector. With their incentives for quick gains on high turnover they have directed our savings away from the real economy where enduring wealth is created.

Ian McAuley is a retired lecturer in public sector management at the University of Canberra.