The unexpected election of the Morrison government gives business an opportunity to get their wishlist: the same old industrial relations deregulation and company tax cuts.

The change of tone from Australian business since the election has been remarkable. Like a prisoner awaiting execution who gets a last-minute reprieve, they’re exuberant.

But what’s also changed is a swapping of the reluctant tone of accepting that the community loathes them for its more traditional tone of hectoring and demanding that the government give them what they want. That is, business wants neoliberal business-as-usual.

From one perspective it is understandable: the Coalition simply didn’t expect to win, so has no agenda for another term. Scott Morrison spent the election campaign not detailing his agenda for a third term but mugging for the cameras and attacking Labor’s long list of detailed policies (a mistake Labor will never make again; for all those earnest economic reform advocates, sorry but you’ve seen your last opposition commit to difficult policies this century). So there is a policy vacuum to fill.

How business-as-usual and vested interests won out

But the speed with which business has reversed itself is more than a little indecent. Innes Willox of the Australian Industry Group has already reverted to demanding that casual workers be stripped of rights, that the Fair Work Commission’s “better off overall” test — which protects workers from losing pay and conditions in the enterprise bargaining process — be dumped and what’s left of the union right of workplace access be even further restricted.

Australian Chamber of Commerce and Industry head James Pearson wants industrial relations reforms as well. The Business Council demanded an end to “the anti-business rhetoric” and said the priority must be “to restore business confidence”. Steve Knott of the right-wing resources industry peak body AMMA called for the further addition of business representatives to the Fair Work Commission and “broader reform of Australia’s workplace relations system” (despite perversely saying that voters had rejected the “false characterisation of our workplaces being in need of radical change”).

“We will strongly encourage the government to pursue improvements to the workplace relations system,” Knott said.

Wesfarmers’ Michael Chaney also wants company tax cuts back on the agenda. “I think the refusal of the opposition to support corporate tax cuts across the board was a huge problem,” he told the Financial Review after also insisting that Labor’s plan to restore abolished penalty rates would cause unemployment.

All of this is familiar to anyone with even a vague understanding of what passes for economic debate in Australia: senior business figures, the media and communications people for business lobby groups and editors of the conservative press have the same demands for “reform” hard-wired into their keyboards: industrial relations “flexibility” to strip workers of pay and conditions and further reduce union bargaining power and company tax cuts to ensure corporations pay even less tax than now.

It’s a position as repetitive as it is unimaginative. Meantime, large swathes of voters shift not to the relatively centrist agenda of Labor but to the economically and socially extreme agendas of the far right. In gloating about its victory over Labor, the business community is missing that its neoliberal obsessions are driving something far worse than a bit of income redistribution and higher health spending. 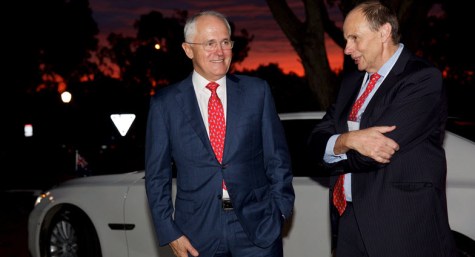 That whining sound is a business sector in crisis 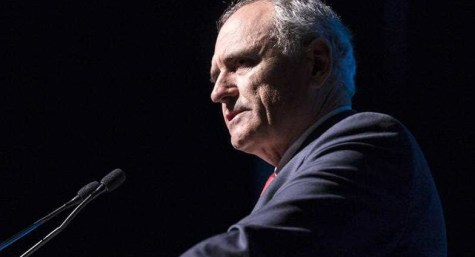 Ken Henry is wrong. It’s not about corporations being nicer.

Business organisations were also advocating a coherent energy policy before the election. Wonder where that goes from here.

COALition & Business are joined at the hip. Can’t tell where one entity ends & the next one begins.

No – I don’t think the business community is ‘missing’ where it’s neoliberal obsessions are taking us. I think our business ‘leaders’ – many of whom are simply mouthpieces for their overseas masters – know exactly where it is leading: to a fascist oligarchy where, of course, they are the powerful and wealthy and the vast bulk of the population are reduced to indentured servitude or worse. It is a development that is occurring all across the planet: from countries as disparate as nominally communist (China) to nominally democratic (the US), with most countries like us, somewhere in the middle. A seemingly inexorable descent into a mix of social authoritarianism and economic liberalism – the formula that suits the goals of the planet’s wealthy and powerful the best, no matter which nation they notionally belong to.

Dead right Graeski, because history shows you can just keep the boots on the heads of the oppressed and they never rise up. It’s fiendishly clever.

Spot on, Graeski. Naomi Klein, in her excellent book ‘The Shock Doctrine’, gives example after example of the unholy alliance between autocracy and neoliberalism/capitalism. The more brutal the autocracy, the better the neoliberal capitalist system ‘worked’ (in favour of international capital, of course, with a few generous rewards for the murderous dictators). It began in earnest with Chile in 1973 and continues apace to this very day.

Unfortunately, DB, we aussies are a docile lot. Rents, house prices, energy prices, the general cost of living, lack of employment, just how much worse does it have to get before people rise up. Just now two thirds of us, pathetically, did not vote for the one party who at least made noises to improve these areas.

I’m thinking that they might have trouble with the crossbench in the Senate, certainly some will support, but enough?

Only the Senate can save us now from an onslaught of unchecked venality from the ruling classes.
Any cross bench Senator openly supporting the LNP in their rush to implement the full IPA agenda can expect a withering barrage of public exposure and reprobation from the 50% of us who did not vote to be dudded blind and have our planet wrecked in the process.

Will be interesting to watch what gets up and what deals have to be done Mike. I have no insight there.

Interesting isn’t it to follow the careers of some of the people who passed through Downer’s office when he was MFA. Innes Willox now at AIG, Greg Hunt, Joshua Frydenberg, Chris Kenny, Craig McLachlan (Dutton’s Chief of Staff) are just some of them.