Counter to many election predictions, it's the boomers wot won it. Now we desperately need to reckon with the results.

In an effort to get myself off post-election Twitter on Sunday morning, I walked my dog through streets I am now less likely to one day live on. These are streets largely populated by baby boomers, many of whom voted to ensure they don’t have to share anything more with the rest of us.

Upon Bob Hawke’s death last week, Guy Rundle wrote “to be young and left during the rise of Bob Hawke was to be in heaven”. Well, to be young and left under the surprise reign of Scott Morrison is to be in hell, with little sight of even purgatory. We now face Hawke’s corollary — regressive short-termism, determinedly kicking the can down the road for my generation to one day clean up.

We were told this would be a generational election. It was, but not of the kind widely predicted by pundits. Commentators hoped for a “youthquake”, buoyed by all-time high youth enrolments after the same-sex marriage survey. But such predictions were blinded by hope, overlooking the inconvenient fact of our rapidly ageing population. 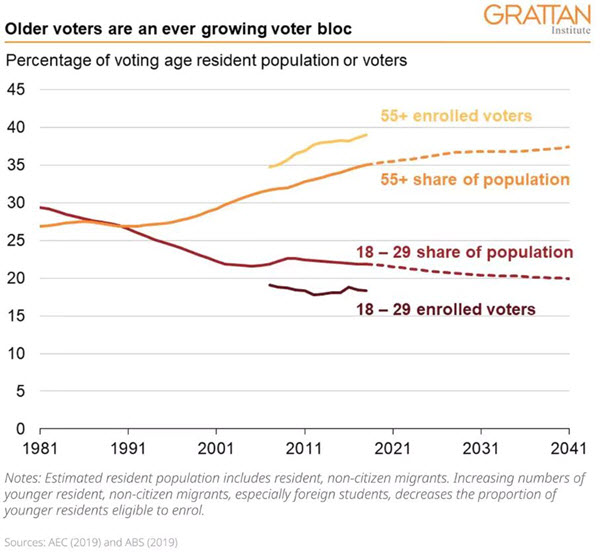 Grattan Institute’s Danielle Wood tried to remind us that boomers hold the keys to the Lodge:

If Labor is relying on a surge of younger voters to deliver it victory then its hopes may be misplaced … Electoral success will depend on persuading enough older voters that Labor’s proposals can provide future generations with the same standard of living that they have enjoyed.

They were not convinced. As The Age reported,“internally, Labor’s polling showed it was being hammered in the over-65 age bracket, particularly in Queensland. ‘Two words: retiree tax,’ said one Labor source.” Queensland, the Land of the Self-Funded Retiree, returned our ruling scaremongers via an intermediary assortment of fascists and trolls.

Some contend that Labor must abandon its taxation agenda to assuage grey-haired defections. But regardless of whether Labor retains its franking credits policy, it should not avoid confronting the perceived self-interests of asset-rich retirees. The policy imperative for unwinding Howard’s wasteful, inequitable upper-middle-class welfare will only increase as demand for public services and the cost of climate change adaption rises.

Others contend that Labor’s issue was poor marketing. A more popular salesman with clearer messaging could cut through the cacophony of lies and assure the greying majority that they wouldn’t be adversely affected, no matter what Tim Wilson says.

Rhetorical persuasion is surely possible, but as the current backlash shows it would require Hawke-esque charisma to dismantle Howard’s Retiree State. Elderly voters — even those not impacted by proposed changes — have a perceived collective interest in maintaining the slew of concessions they receive. These are seen as rewards, not absurd bonuses based on ingrained generational myths of aspirational achievement.

Perhaps the only way to convince the electorally dominant boomers to part with their tax concessions is to beef up compensatory benefits. The sweeteners Labor offered, such as free dental for seniors, were not enough. My suggestion? Raise the pension. One third of Australian pensioners live in poverty — a fact often lost in the so-called “age wars”. Furthermore, inequality between retirees will markedly increase in coming decades.

Offering struggling pensioners higher living standards by de-feathering their asset-rich neighbours’ beds would blunt the conflation of modest, targeted redistribution with broad demographic attacks. A new intergenerational bargain could be struck — one that offers aggregate improvements in exchange for the elimination of unsustainable excesses.

As disappointed as I am with our electorate rewarding the Coalition’s cynical scare campaign, I refuse to wallow. The warming of the planet, the deterioration of working peoples’ lives and the persistent denigration of our First Nations people will not wait for indulgent complaints.

We must organise. But to proceed without accounting for the voting bloc that will decide our nation’s future would render our efforts futile.

To achieve progressive governance for the sake of my generation’s future, we must bridge this growing generational divide today. Your franking credits will be of no use to us, your children or grandchildren on a barely habitable planet.

How can Australian political parties bridge the generational divide? Send your comments to [email protected].