It’s a great time to have a lower dollar. But we wouldn't want it to stay too low for too long. 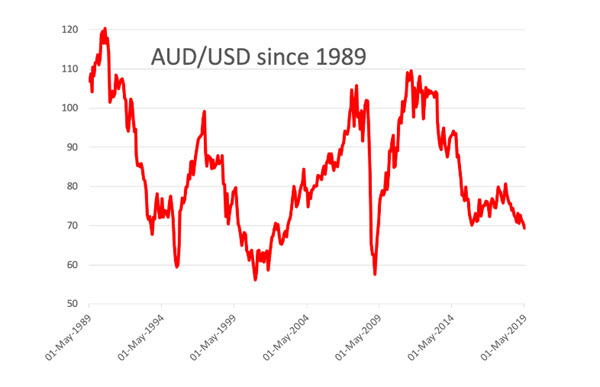 In the period since Keating floated the Australian dollar, it has dwelled lengthily below 70 cents only once, in the early 2000s. Is this most recent dip likely to be a transient move, or should we get ready to adapt to a new normal?

The person to thank for our lower currency is the US President Donald Trump, who believes trade wars “are good and easy to win”.

His entirely optional conflict with China is escalating to become a serious threat to global economic growth, affecting markets all around the world. Among them, the market for the Aussie dollar.

The lower dollar is interpreted by some as a sign of impending doom. And in a way it is. But the whole reason we have a floating dollar is that a lower dollar acts as a defence. As the dollar slackens and falls, there are two great effects. First, our exports become cheaper on global markets. The simplest example is tourism. An Australian hotel that is A$100 a night just got cheaper in USD terms, and should be able to fill more rooms with foreign tourists.

The second effect is that imports to Australia become more expensive and we are more likely to choose a domestic option. Which is wonderful news for Aussie companies competing against imported alternatives. In these two ways, the floating dollar helps our economy adapt to the weakening global environment.

As 2019 kicks off, it’s a great time to have a lower dollar. Australia’s commodity prices are rising and our trade balance is decidedly in surplus. In the last two months, Australia has exported $5 billion more in goods and services than it has imported. This is a shift from the old days when we were heavy importers, and much of the credit can go to the resources industry. Boatloads of iron ore, coal and gas are turning Australia back into an exporting nation. Rising prices and a falling exchange rate represent the best of both worlds.

But how exposed are those industries to a falling exchange rate? Do they really see the benefit of a lower dollar? BHP, for example, denominates most of its sales in US dollars, borrows in US dollars, holds cash in US dollars, and presents its accounts in US dollars. In the past, a weaker US dollar has negatively affected its reported earnings. It might see upsides to its bottom line from costs in Australia that are lower in USD terms, and of course when profits are changed into Australian dollars for distribution as dividends to Australian shareholders.

The second question is how tightly linked the great Australian exporters really are to Australia’s economy. Resource extraction is not labour intensive, much of the capital equipment it uses is imported, some of the profits it makes are distributed to foreign owners, and the resource royalties they pay, while substantial, raise a fraction of the revenue they might have garnered if Rudd’s mining tax had got up. The resource industry has a big impact on Australia’s GDP numbers for how little difference it makes to most people’s experience of the economy.

The storm clouds over global trade are hard to predict. Will the trade war worsen? Donald Trump warned China not to retaliate to his latest round of tariffs, warning things would “get worse”. 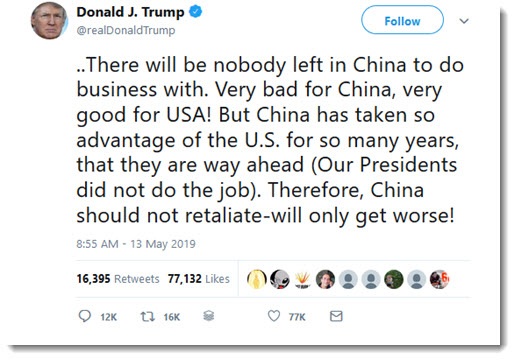 They retaliated. It is difficult to see who will yield first. Neither side in this battle is famous for being willing to lose face.

Can Trump, the man who wrote The Art of The Deal, come out of this one with his dignity intact? Part of the problem is that Trump apparently sees trade as a zero-sum game where if one side benefits another must suffer. In this way of thinking, America’s trade deficit with China is tantamount to theft, and he is understandably upset about it.

The problem is that trade is not a zero-sum game. Being able to buy enormous quantities of things from China cheaply is a benefit to the USA, not a cost. Until Donald Trump realises this, it is hard to understand whether he will back down. One way out may be for China to hold its line until the end of next year when a new, more rational US president might occupy the White House.

If the trade war takes that long to resolve, that will be bad news. Its effect on the global economy could be severe indeed, and Australia’s dollar could fall further still.

This should be a huge advantage to Australian exporters, whose products and services are more competitive on the world market.

Will it be enough to help our economy pick up? A lower exchange rate is free money for the big exporters that sell onto global spot markets, which is nice for them but makes little difference to the rest of the economy.

There was once a time when the level of the Aussie dollar was discussed alongside the interest rate as part of the “monetary conditions” that drove the economy. But the exchange rate has been stuck at 70 cents for so long that’s rarely been mentioned for years.

I wonder if the Chinese might choose to meddle in US politics by supporting a Democratic candidate in 2020 ?

Trump didn’t write “The Art of The Deal”. It was ghost written by a guy called Tony Schwartz, and Schwartz has said that he’s pretty certain that Trump never even read it.

Trump’s world. Wars, assorted, both internal and external. Jared Diamond’s excellent book Upheaval tells why we should be very worried but what can be done to stop the train wreck.

Trump’s tweet on there being “nobody left in China to do business with” is quoted without analysis. Trump doesn’t seem to understand that China’s exports to the US constitute quite a small percentage of China’s economy, from memory about 3%. China’s economy is more oriented now to domestic consumption and investment which US tariffs don’t affect. 3% would hurt if it were all lost, but it won’t all be lost. Chinese washing machines have increased in price in the US but how much have their sales fallen? Trump keeps saying the tariffs on Chinese goods are enriching America and it’s hard to know whether he’s just saying that to keep his supporters happy or whether he really doesn’t understand that tariffs are paid by the importer, not the exporter.

When the Liberals came in 6 years ago the A$ against the US$ was at 94 cents it is now at 69 cents a loss of 30% so the Liberals have devalued the nation by nearly a third.

They have also and doubled the debt they complained about so much in opposition.

If it was our personal finances the bank manager would be calling and we would be sold up quick smart and declared bankrupt.

The Liberals lie about these matters.

They are totally irresponsible with the reins and these are the good times.

Labour had to deal with a world financial implosion of 2007 and we then had the worlds best treasurer.

Why do you not report these matters as cold hard facts?

Why do you think the likes of Glencore and the Chinese are buying our assets .

Because we are currently giving them away courtesy of our collapsed exchange rates.