A "human error" resulted in the release of Australia Council grants' applicants private information. Plus other tips from the week.

Grants out. A tipster trying to download the latest round of Australia Council grants was met with a rude surprise on Monday. Alongside basic information about recipients and their funding was a tab including data certainly not intended for public access — including but not limited to detailed personal information (email, phone number, address, etc), project summaries, requested funding, and answers to their application questions. Sometime after Monday afternoon that Excel document was replaced with the intended information including, for some reason, applicants’ federal electorates.

Executive director of grants and engagement Frank Panucci tells Crikey the mistake came about due to human error as the council transitions to a new publishing system. The issue was reportedly rectified within three to four hours and, he says, all applicants were notified of the situation and asked to get in contact if any issues arose due to the breach.

Barry Joyner’s bad day. The former deputy prime minister has had a decidedly weird 24 hours on Twitter. First, Barnaby announced to the wrong Rob Oakeshott that he was leaving (apparently a reference to the real Oakeshott’s dig about straying into Nambucca Heads and lyrical comments on the 2010 hung parliament). Then, the former Nationals leader confused ABC’s Vote Compass with policy app WomenVote, which is privately run by three senior Sydney lawyers. 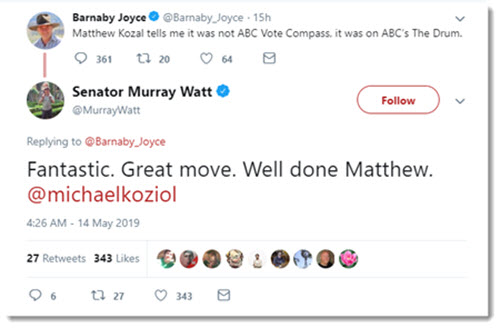 News Cutz. News Corp is on track to spend more than A$400 million on sacking staff and paying out their contracts in the three years to the end of the current 2018-19 financial year on June 30. Filings with the US Securities and Exchange Commission show that, up to the end of March, News had spent a total of US$275 million (A$393 million) “primarily related to employee termination benefits at the News and Information Services segment”. That’s a quarterly rate of US$25 million which, if continued in the current quarter, will take the three-year total to US$300 million or nearly A$430 million.

Finding out where exactly the cuts have happened though is hard seeing News Corp does not announce them (unlike Fairfax a couple of years ago). We know anecdotally that staff number on The Wall Street Journal, The Sun and The Times, and across the company’s Australian papers have been cut, especially in its suburban papers in Melbourne and Adelaide, as well as the Courier Mail in March and April. More cuts will come in London at The Times and Sunday Times when their newsrooms are merged.

Advance Australia wrong. A tipster has told us Advance Australia has been distributing material criticising independent candidate for Indi Helen Haines, and it now looks like they’ve flown in horrid orange ghoul Captain GetUp to deliver the message in person. This is despite the fact that GetUp has no real connections to outgoing Indi independent Cathy McGowan, nor has it mentioned anything about Indi in its election campaigning. 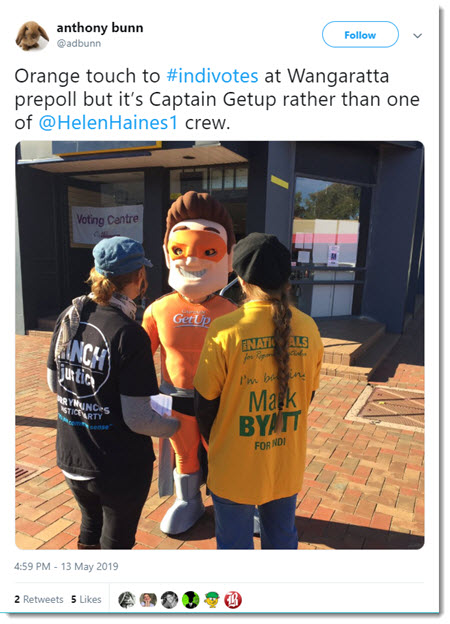 Election advertising blues. While the letter Liberals sent to independent candidate Oliver Yates has made clear that misleading political advertising is perfectly lawful, The Guardian today revealed the party (and One Nation) has run afoul for publishing ads without authorisation.

Meanwhile, residents in Peter Dutton’s electorate of Dickson have also received “final notices for rent increase” and “mortgage notices” warning of Labor tax policies, complete with debt stylings and a notice to return “if undeliverable”. 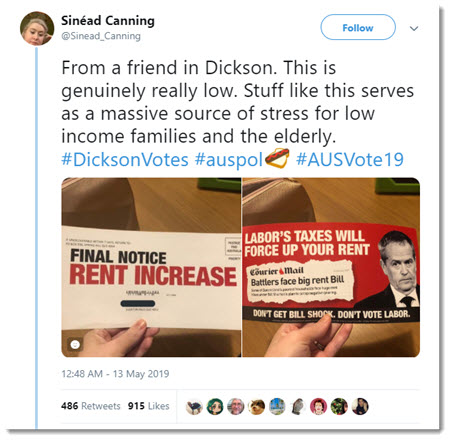 The New Daily reports that real estate agents are sending renters correspondence on official letterhead with similar warnings to tenants.

Kooyong krazee kapers. This election has seen plenty of campaign graffiti, but a Hawthorn voter gets extra credit for effort and bigotry. Apparently perturbed by graffiti, the resident in Treasurer Josh Frydenberg’s seat of Kooyong went to the effort of knocking up, printing out and glueing a series of “talking points” that manage to compliment Josh’s good looks (fair!), knock the Greens, and slur disabled, poor and LGBTIQ communities. Plus Venezuela, because at this point why not?

Heard anything that might interest Crikey? Send your tips to [email protected], use our guaranteed anonymous form or other ways to leak to us securely

Rorting is rife. But do voters care? Perhaps not

There was no news of any sacking from the Australia Council for breach of privacy. Does Crikey accept that?
If it does and from the news it seems that Crikey does accept it, then should there be a sacking at Crikey?

“News Cutz. News Corp is on track to spend more than A$400 million on sacking staff and paying out their contracts in the three years to the end of the current 2018-19 financial year on June 30.”

“Socialists, go and live in Venezuela”

Yeah, cause American sanctions have nothing to do with it, amiright!!