Meet candidate Craig Garland, the Tassie fisherman saying ‘no’ to the big guys

"I wouldn’t want to leave Tassie for Canberra. But if we don’t fight, we’re going to die."

Dunalley fish ‘n’ chips is a dark wood shack with picnic tables in a big yard and a dozen chooks in a wood pen beside. There’s no gastro-pubbing here. Punters eat beside big blue troughs, where the catch is washed.

Stainless steel benches in the back, charts of fish, and Johnny Cash memorabilia on all the walls. Beyond, the bay and Fulham Island (50km east of Hobart) spreads across the horizon. Most of what’s on offer comes out of here.

Grey day on the bay but winter hasn’t even started. There’s four or five groups, all in fleeces and windcheaters, chowing down on seafood baskets. When we pull up, Senate candidate Craig Garland jumps out in an instant — whisper thin, grey sea-matted Jesus hair flying, and goddamit, the people here know him. “We were just trying to work out what it says on your t-shirt” says a weatherproofs-clad woman, pointing at the poster of Craig and his running mate on the yard fence. 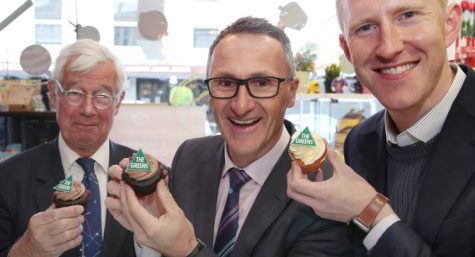 The anger and envy of Higgins’ bourgeoisie

Craig Garland and his running mate, “Mr Flathead” for the Senate — “if we win, you win” it reads, a trifle too enigmatically. “Orrrhhh it’s about the cages,” he says, showing them one of the fish farm images that he has at hand. It’s white, with a depiction of salmon farming more like a ’50s sci-fi horror movie.

“Cos we didn’t really know if you were for or against it,” the woman ventures.

“Well I’m not a lock-it-up person, I’m not a member of any party… but we’ve got to change the whole way we do things, say ‘no’ to the big guys,” says Garland.

Jane, the weatherproof-clad type, nods along. She’s a pro sailor, the others are deckhands and yacht punks from round the world. She’s taking a ship out to Bruny Island. Craig is at his car grabbing more t-shirts.

“I thought the salmon stuff was mostly cleaned up,” Jane says when he’s back.

“Yeahhhhhh, nah, not at all.” He explains: the salmon industry still has open slather, is cramming the bays with fish farms, killing local fishing, the shoreline and much more. Jane nods, listens. Craig goes inside. 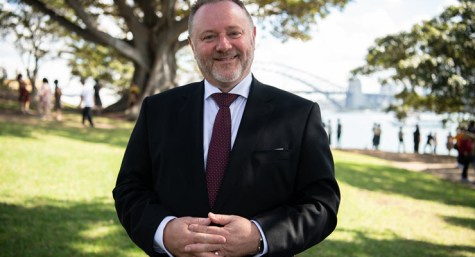 Gah, Tasmanian campaigning; any more laid back, it would be going over the side of the ship, scuba-style.

Inside, there’s no need to sell the message. The owner, Bruce, is as old school as Craig is wild-man. Bruce has neat clipped hair and a classic face. In fact he’s the dead spit of Humphrey Bogart, and with the same melancholy air. He doesn’t need much prompting.

“We get supplied by a couple of fishies here. It’s never been so bad, the catch. Declining over 20 years. Over-fishing, trawlers… a whole way of life’s being killed.”

He looks ruefully at the stainless steel benches.

We start back on the winding Hobart road. The wide bay revolves in the car windows, the thousand shades of blue, the bloody beauty of it all. “But if we don’t fight, we’re going to die.”

Craig Garland sold his first fish at the age of eight, in the “top” pub in Wynyard on Tasmania’s north-west coast. He’s 55, so this was the ’70s; but in the northwest, that’s still the 19th century. “Everyone went there on a Friday night, everyone was drunk. They paid 10 bucks. That was a lotta lotta money in those days.”

He already knew the coast and waterways, ranging wide. Dad was a drunk, ran card parties, mum was a professional housekeeper. Just retired at the age of 80. Eighty! He left school halfway through Year 10, went to the navy. Came out at 17, went to the docks at Burnie.

“The next 10 years there I did everything, ran the joint, loading, payroll, tides, weather, ship husbandry…”

“It’s just everything to do with ships… at 2am, youve got a call and an engine’s gone down, you’ve gotta work it out.”

After 10 years, he’d done everything six times; it was Melbourne or further afield. Instead he went right back to the sea, opened a fish shop in Wynyard, stocked it himself.

“Get up at three, four; pull the nets, ice the fish, open the shop. Really took off when I started fish ‘n’ chips.”

He loved it all. You look at a fishmongers, see the ice, the grey fish flesh, the guts in buckets, the dark cold mornings on the docks, you think, who would? But it’s an alchemy, all-involving, the thousand species, the shifting coastlines, the transcendence of it all. And this was northwest Tas, the ’80s, tight margins. His boat capsized twice and he couldn’t afford to recover it. Traded the shop for a shack after he used his chalkboard to diss the local paper about its propaganda for the Wesley Vale mill — the key green fight of the ’80s and into the ’90s. He did his leg in northern Tas semi-pro footy, and went low, very low, before the love of one or two women geed him up and he became a purveyor to the quality markets of Melbourne and Sydney.

We’re wheeling through the coastal towns now — once sets of shacks for Hobartians for the weekend that firmed into fishing towns, now become the city fringe belt.

About the time he got back to the sea, Garland noticed that things were changing. 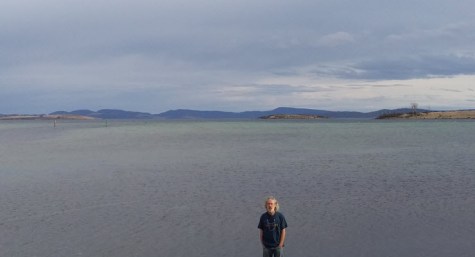 Something fishy going on with supertrawler brawl 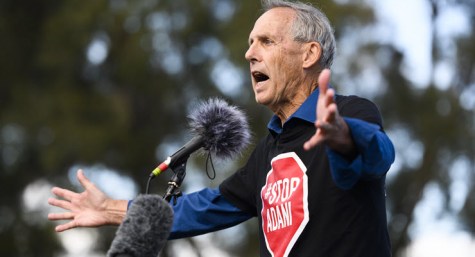 It’s refreshing to read about candidates with life experience – unlike many in the Oz parliament who were shoe-horned in because they were a retiring MP’s advisor/ hanger-on.

And Garland has run businesses. Wouldn’t that over qualify him for Canberra…

Jesus hair, fisherman turned fisher of (wo)men, helped by the love of one or two women, just come ashore off that water? Call me Thomas, at least till tomorrow.

Apart from the many other reasons I’d like to live in the Merkin Isle (despite FDotM’s constant warnings about “how terrible it is so please don’t come here!”) the opportunity to vote for Garland would be a real plus.

Guy writes so beautifully that tomorrow seems like a long time to wait for the second half of Tassy candidate Craig’s story- so authentically told that I can smell salt water and fish!
I do fear though the result that one issue or no-policy independents generally will have in this election if put into power by a slab of uninformed and disillusioned voters who repeat the shock-jock mantra that you can’t trust politicians or that both major parties are as bad as each other. Labor has developed comprehensive policies over it’s 6 years of opposition to take our society to a better place and it has a cohesive bunch of smart and dedicated politicians ready to implement those changes. If those legislative proposals are blocked by crooked fools like Clive Palmer and narrow-minded One Nation Idiots, elected from ignorance by people who can’t be bothered spending 10 minutes looking at the party website to see what Labor Party policies are (or watching Insiders or listening to Radio National), the chance for progressive change will be squandered. 40 years ago, I laughed at Italian politics with about 50 “parties” bickering over legislative amendments that nudged democratic rule into nothingness and, at least in rural Australia, it seems we are moving to a place like that. Democracy is a treasure that deserves informed choice.