The question is: will either of our big department stores succumb to woeful conditions? And if so, who goes first?

Sometimes there’s only room for one. Australia’s retail landscape is a brutal war zone, not prone to sentimentality. Big retail chains can simply disappear.

Take Bunnings and Masters. Back in 2011 the big green giant was well established in the hardware retail space and for it, making money was easy. Of course it would attract a competitor. Bunnings is owned by Wesfarmers, so Woolworths Limited launched a hardware brand of its own: Masters.

Masters was not some trifle. The company opened 63 large format stores and spent billions in doing so. They were all in on this strategy.

But they soon discovered market had no space for Masters. Yes it was almost a Bunnings clone. But it had a few subtle differences in colour scheme and range, and those were enough to doom it to irrelevance.

Such is the state of retail in Australia this decade. Overall growth is anemic and those who remain are fighting as much for survival as for profit.

Retail, however, has many faces. The supermarket space has seen growth. Aldi has boomed without killing either Coles and Woolworths. The old established players are both shrinking in relative terms, making fewer sales per person, but the emergence of a competitor has not yet become an existential threat. That’s because, as the next chart shows, overall food retail spending continues to grow (the figures in this chart and all the subsequent ones are adjusted for inflation). 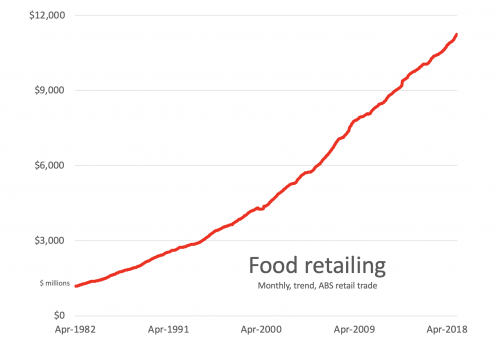 We all need to eat. Food retailing is going well. But not every sector is as lucky as food retailing. Hardware falls into the category of household goods, and in that category growth has seemingly capped out. Spending on household items was lower in March 2019 than in March 2018, according to official data. 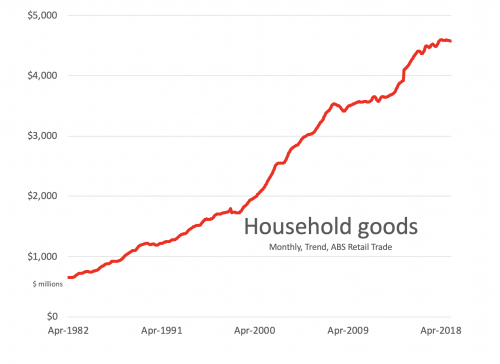 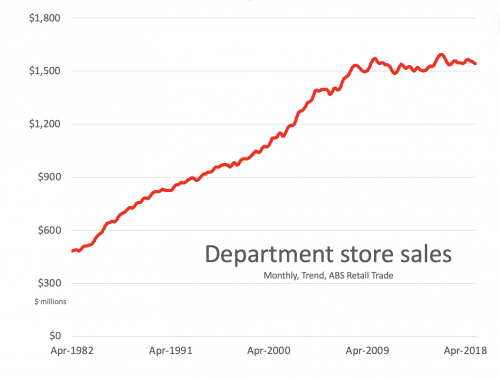 This is the sort of context that kills retailers. The question is: will either of our big department stores succumb? And if so, who goes first?

Myer we can observe closely. It remains a public company in Australia and so we see its annual reports. Myer’s revenues are $3.10 billion in 2018, down from $3.26 billion in 2009, the year it floated.

Myer’s IPO saw it trade at $4.10 in 2009. It now trades at $0.64 . That might sound bad but earlier this year it was trading at $0.36, so Myer is actually showing signs of life. The store recruited a new CEO named John King from the UK and posted a profit in the most recent quarter.

Nevertheless it is possible to get an impression. Its owner reports that sales increased by 1% in the last six months of 2018, while store costs increased by 1.3%. Operating profit fell sharply and the company intends to continue to shrink its store footprint. The company is without a CEO as the last one just left for “personal reasons.”

Grim sales and rising costs lead department stores to cut costs. Service becomes a weak point. That in turn leads to awful PR, like when Fairfax business journalist Adele Ferguson goes to your store, gets treated badly, and writes a column about how she’s never going back. That happened to David Jones just a couple of weeks ago.

Many of us have similar stories of being unable to find a sales assistant when you need one. The question for big department stores is whether they can retain their relevance – and their premium price points – in the absence of spectacular service.

It’s hard to see how the downward spiral will be broken. There may be room for one large department store in Australia, but is there room for two? And if one goes, will it be Myer or DJs? Neither of them is Bunnings, but which one is Masters?

Having read the link Channel9’s business writer on her lousy day of shopping, I understand why Australian media is also in trouble. Maybe she’d be better of writing for Choice magazine.

“Aldi has boomed without killing either Coles and Woolworths.”

All three are killing the planet with the huge amounts of single use plastic they wrap their products in.

“But they soon discovered market had no space for Masters. Yes it was almost a Bunnings clone. But it had a few subtle differences in colour scheme and range, and those were enough to doom it to irrelevance.”

Masters did not duplicate Bunnings terribly well, for a number of reasons; not having the right stock at the right time of year, not having good sites, not having good store layouts and not appealing to the tradie market. Taking on an established huge business with loyal customers is hard enough if you do get it right.

As for the topic at hand, I’m kinda surprised both Myers and DJs are both still alive at all, and I tend to think their shoppers still go there out of force of habit + the convenience that still exists in bricks and mortar shops vs waiting for a package to arrive. They are the zombies that will not die. Even if one dies, the other one will not become Bunnings. It will just be a slightly longer-living zombie.

The idea that (non food) retail is a good thing, in & of itself, seems odd – as if some mercantile Descarte opined “Emo, ergo sum”.
That this piece made not a mention of the thing retail needs most, disposable income, is very strange – surely wage stagnation is not irrelevant to the lack of madding consumption?
I would like to think that there is a more sensible reason for this decline – that people just already have too much crap but that is unlikely.