Four years ago, acclaimed novelist Di Morrissey got fed up with her local papers, and started her own. It's not an easy task.

This is the second instalment of a story about Di Morrissey, the best-selling author who started her own community newspaper. Read the first part here.

When Di Morrissey started The Manning Community News in 2015, her main goal was improving the quality of local news for her neighbours on NSW’s mid-north coast. Her own campaign about TransGrid’s plan for power lines running through her hometown in the Manning Valley didn’t rate a mention in any of the local papers (previously owned by Fairfax, now owned by Nine), and she thought she could fill a gap left by the depleted papers.

Morrissey says her paper is “truly independent”. She gets minimal advertising from local businesses, who mostly already had arrangements with the then-Fairfax newspapers (the paper goes out free, almost entirely funded by Morrissey herself as a “community service”). Those newspapers, a group razed under Fairfax Media’s management in recent years, are mostly populated with press release rewrites and inconsequential community news. 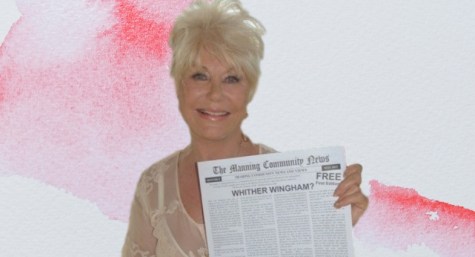 There are other local papers which are more frequent (The Manning Community News is released monthly), but none of them cover the whole council area.

“When we got amalgamated at the end of 2016, we became this massive area, 10,000 sq km and over 99,000 people,” Morrissey said. “It’s huge, so everybody has their own little pockets and you don’t necessarily know what’s going on in other parts. Things were happening that never saw the light of day.”

Morrissey’s community-focused news is delivered with an aggressive approach to the local council. In recent editions she has covered a council move to purchase a former Masters store site for new offices, a change in council general manager, and legal problems plaguing one of the councillors — all while calling for greater transparency of council decisions.

She claims this has led to the paper being banned on Mid-Coast Council sites, though a council spokeswoman said this is not correct and the paper is also available in council-owned libraries.

Morrissey published a piece about the “ban” in her March/April edition. “That little piece has caused more outrage than a lot of other things,” she said. “A few local writers have called me a left-wing radical conspiracy theorist, but I’ve printed things that are critical of me and the paper too, with my own feelings about it.

“People felt helpless and that they had no voice, but now everyone goes ‘tell Di, she’ll do something’. [The paper] has been hugely embraced and I’m sure I have many critics, but I don’t think they’d want the paper to go.”

In a statement, the council told Crikey that Morrissey’s paper was treated the same as any other local press.

Morrissey told Crikey her requests for interviews with the general manager had been turned down, and that responses “were generally convoluted council-speak rubbish”. She stands by reports she’s heard of her paper being banned.

Either way, there is no love lost between the paper covering the council’s entire jurisdiction and the council itself.

“Every little area has its little magazine or paper, but now there’s no real competition,” Morrissey said. “I ask hard questions … maybe the MCN isn’t always as polite as it could be, but we stand up, and call out the truth as well as, hopefully, provide a little stimulating thought.”

What’s the future of local and community news in Australia? Send your thoughts to boss@crikey.com.au.

Despite print’s so-called death, one newspaper continues to grow

Congrats Di and proof there is life in a local well run community newspaper that responds to local and community needs.
As a retired rep who plied his trade for more than 15 years selling advertising space in Community Newspapers In Western Australia, I loved the privileged insight you gained to local business and enjoyed building local campaigns, The decision last year was made to close several of the local community papers, as I understand they did not meet the business model (profits)of News Limited. Most of these publications were purchased by News Limited 20 years ago to build a national profile.
In the Western Australian market we have the Post Group of papers, who publish a weekly gem of a paper, which I believe is profitable, another I have noticed is the Northern Valley News, they focus on their local area, but publish monthly. Perhaps it is the profit expectations rather than the business and readers needs, that is closing many of these publications. Good luck Antony Catalano, I wish I was 20 years younger!

Of course local and community newspapers have a future. It just takes someone local like Di, who actually cares about their community, to keep their hands on the wheel and produce something worth reading, something Fairfax for one, hasn’t done for quite some time in their regionals.