Voices For Indi is a movement focused on keeping the seat for an independent, and achieving a handover from independent to independent — a first in Australia.

This is part two of a two-part series from Guy Rundle on the battle for Indi. Part one can be found here.

Orange, a blaze of orange, before my eyes. Through the orange mist, a voice: “Let me take you on a tour”. Orange T-shirts hung on the wall, orange dragon cut outs, orange this, orange that. The orange recedes, the shapes start to define themselves: tables, chairs, desks.

“Here’s the chart of the values; everyone who joins has to agree to the values of the movement.”

We’re in the Wodonga hub of the Voices For Indi/Helen Haines campaign. It’s a ’70s style ranch house, with about nine rooms, unaccountably built in the centre of the ‘Dong, and soon to be demolished for apartments presumably. But the owner is a supporter of the movement and has lent it to them for the duration, so:

“This is one of the 16 hubs of the Helen Haines campaign,” Mimi, a tall, long-haired brunette in two layers of T-shirts says.

“They’re not offices, they’re hubs,” says Helen, sitting opposite me. Hungover, groggy, I’m chewing my way through orange candies and orange-wrapped Easter eggs, hoping they won’t notice, but I think they do.

There are about a dozen people hustling in and out, about three-quarters women, I’d guess. Each of the rooms coming off the central room have a sign: PUBLICITY, MAKING, OUTREACH etc.

“People know what they have to do and they do it,” says Mimi. Mimi is Mimi McGowan, sister of incumbent MP Cathy McGowan. Helen is Helen McGowan. Cathy is at the pre-poll in Albury. Helen Haines is barrelling down the highway, orange caravan in tow, to the southern end of this ridiculously large electorate.

“Most of them are involved in one way or another”

“They tell me you’re the organiser of this whole thing,” I say to Helen. She demurs. “No, no, come on Helen, I hear you’re the Raúl Castro of the Indi revolution.” There is a silence.

“As you can see, it’s a self-motivating thing,” Mimi says.

“It’s about acting on the values that defines the movement,” someone else at the table adds.

Ah yes, the values. The values are: respect, trust, courage, positivity, inclusivity, and one I forget, possibly conveniently. They’re on posters on the wall, on merch, on the T-shirts — a values-driven campaign.

This was first an ad-hoc movement, defined around getting rid of an unpopular local member, Sophie Mirabella — remember her?! — and then around supporting her replacement, independent Cathy McGowan. Now it is a movement focused on keeping the seat for an independent, and achieving a handover from independent to independent — a first in Australia. A double-first really, since Voices For Indi are trying to do it without becoming a full political party, with all its baggage and pretensions.

All in all, it’s a pretty efficient outfit. Letter-boxing teams come and go, piling up sheaves of orange leaflets and posters. There’s a screen printing room, turning out T-shirts on orange blanks, a merch room making doodads, and a strategy room, with a fearsome series of wall maps carving up this enormous electorate.

The “hub” designation is fair enough; there’s an energy here that is absent from a lot of candidates’ offices during campaigns, which usually have a counter, a backroom, two or three people hanging round who don’t need to be there, a stressed coordinator who can’t delegate, and an atmosphere which combines torpor with high anxiety. By contrast, the orange “hub” has a degree of anarchist self-management about it.

“There’s a lot of cohesion — that’s why signing on to the values is so important,” says Colleen, pushing tea and a cake, inevitably of an orange-ish hue. My blood sugar is soaring, this is becoming vaguely hallucinatory, an acid-trip CWA meeting.

We get into the weeds of the values for a bit; a smidgen too much for my liking. Movements can get too caught up in their own process, self-congratulatory. Helen brings it back round.

“The issues for the campaign are clear, the local and the ‘big’: we’ve got to have real action on climate change, but we’ve also to improve access to education and training here, we need better regional transport … but that all has to be done in the same spirit as the Voices For Indi, the kitchen-table conversations…”

The story is well-known now, but worth a brief retelling. Locals and “expats”, most of them from round Wangaratta — the fin de siècle Vienna of north-central Victoria — became increasingly dismayed by the unwillingness of Liberal member Sophie Mirabella to, in their view, respond to local concerns, or do anything much but enforce party policy.

A series of “kitchen table conversations” were organised, to coalesce local concerns — for the most part about the region being taken for granted as a safe seat. The conversations became the Voices, Cathy McGowan became the candidate, and she knocked off Mirabella — whom the Liberal Party ran again in 2016, with the same result.

“Really, it was a lot of the kids coming back from elsewhere saying, ‘you’ve got to something about this’ that geed a lot of us up,” says Mimi.

“I did hear an urban myth,” I say “that the whole thing was got up by a bunch of Wangaratta students at Melb Uni who had studied French theory, and were activating a Deleuzian rhizomatic space to surround and destroy the Liberal machine…” Another silence.

“Ha, you’d have to ask them about that.” The room is swimming, I wonder if I’m hallucinating it all. Will a giant orange rabbit come through from the disused breakfast nook any minute?

Whatever chance the Libs might have had to let this nascent social movement die down was lost when they went after many Voices For Indi youth for allegedly falsely registering in the electorate when they were students in Melbourne — a push covered with breathless support by The Australian.

The case failed easily, but it appears to have concreted a sense that the party had set itself against the community, creating a vacuum in which Voices For Indi could build and consolidate.

“This is the sort of place where things get discussed,” says Tony, an academic, who has just turned up and immediately started collating leaflets at the table. “It’s a living politics.”

It is indeed. Across Wangaratta and Wodonga, the orange shirts are everywhere. One Nation, confusingly has also taken up orange — as has GetUp. Everyone wants to be Mr Black! — but they’re thin on the ground. It’s all Voices, everywhere.

Whether that will be enough to persuade the electorate — a ridiculous one now, going from the Melbourne exurb commuter belt to the border, areas with wildly different needs and priorities — remains to be seen. Everyone at the core of the campaign knows the immense gravitational pull of the non-Labor parties in (mostly) rural electorates.

Beneath the enthusiasm, there is a hint of strain, the sure sign you’re doing something that matters. Victory here would be sweet, defeat a real setback. There are not many other places you can say that about, in this baffling election. Brilliant orange, a form of post-politics that becomes total politics, and turns the heartland into a battle zone. 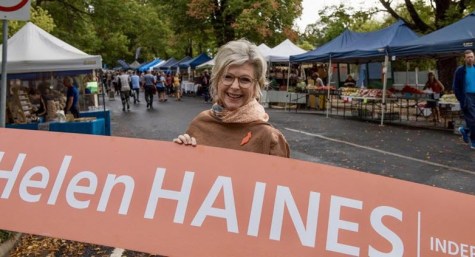 The urban myth is a corker, Guy. Voices’ volunteers are unlikely to forget your visit.

“Rather than narrativize history and culture, the rhizome presents history and culture as a map or wide array of attractions and influences with no specific origin or genesis, for a ‘rhizome has no beginning or end; it is always in the middle, between things, interbeing, intermezzo.’ The planar movement of the rhizome resists chronology and organization, instead favoring a nomadic system of growth and propagation.”

It seems even Guy Rundle has fallen into the laziness which besets the MSM with his comment about “achieving a handover from independent to independent — a first in Australia.” It won’t be a first. Ted Mack “handed over” to Robyn Read as Member for North Sydney/North Shore in the NSW Parliament in 1988.

Politicians think voters have the attention span of a gnat and the memory of a goldfish, so they say almost anything. Journalists not doing their research and checking their facts are just aiding and abetting the pollies. Two minutes on Google confirmed what I thought I remembered about Mack. Maybe you should try it some time Guy.

federal, not state, first. i suspect yd find several indy to indy transfers at the state level. an error on my part perhaps to omit tge qualifier, but other readers were quick on the uptake

Guy, this is where you say “I was wrong”, not split hairs.

“first in Australia” is pretty unequivocal and this is the second article you’ve phrased it that way.

I always pictured it as somewhere out in the sticks but on the current boundaries – Kinglake to Corryong – it is quite a monster to cover. I guess 13 hubs would do it.

Thanks Guy, as this torturous pollie-waffle-a-thon creeps to a climax, some colour and wit is most welcome.

The word for a colour ‘orange’ didn’t exist in English until the Tudor era.
Unfortunately it is now tainted by association with Gitmo jumpsuits and the Orange Ogre.
Pity, coz when hallucinating it couldn’t seem any brighter.
Yeah, “activating a Deleuzian rhizomatic space ” lay off the sugar laddie.

but with the Orange Ogre we know they’re just Fake Hues.