Has the minimum wage been growing at a faster rate than inflation?

Josh Frydenberg told the ABC's Q&A that the minimum wage has been growing at a faster rate than inflation and the average wage. Is he correct?

In the lead-up to the federal election, Labor has been pointing to sluggish wages growth as evidence that Australia’s long economic boom is no longer benefiting low and middle-income families struggling with cost of living pressures.

In a recent episode of ABC’s Q&A, Treasurer Josh Frydenberg sought to turn the tables, claiming Australia’s lowest paid workers had — via the minimum wage — fared better under the Coalition than when Labor was last in government.

“[The] real minimum wage has gone up under us every year.

“Under the Labor Party, it actually went backwards.”

Is it accurate to say that the minimum wage has outstripped both inflation and average wages since the Coalition came to power?

And did the real minimum wage go backwards under Labor?

Frydenberg’s claim is a fair call.

The minimum wage, as set by the Fair Work Commission, has increased at a faster rate than both inflation and the average wage on an annual basis since 2014-15, the first full financial year after the Coalition came to power.

In other words, the real minimum wage has grown every year.

This is consistent with Frydenberg’s claim.

However, his comment about Labor is not so clear-cut. It can be taken as referring to Labor’s entire term in office, or to any year during that time.

However, Fact Check accepts that the alternative interpretation is also reasonable, and on that basis Frydenberg is on shakier ground as the minimum wage increased across Labor’s term as a whole.

Nevertheless, the data shows that the real minimum wage has risen faster on average under the Coalition than it did during Labor’s term.

Taking his claim as a whole, Fact Check considers it to be a fair call, given the preferred interpretation of the comment about Labor and the superior record on average under the Coalition.

There are some important caveats about that relative performance.

As the Fair Pay Commission explained, the decision not to grant low paid workers a pay rise in 2009-10 was due to concerns about the falling employment growth linked to the global financial crisis.

Whether the 2013-14 financial year should be attributed to Labor or the Coalition is debatable.

The Coalition won the election in September 2013, some three months into the financial year.

Because the 2013-14 minimum wage decision was taken by the independent Fair Work Commission before the start of the financial year when Labor was still in government, based on prevailing and expected economic conditions at the time, Fact Check has counted 2013-14 as a “Labor year”.

Likewise, the 2007 wage decision, which applied from October 1, 2007 for 12 months, has been treated as a “Coalition year” (although Labor won the election in November 2007).

Fact Check acknowledges there is no simple solution to the question of how to treat “cross-over” years, particularly since government policy can influence economic variables such as inflation (which in turn influences real wages).

Experts consulted by Fact Check noted that while a government might claim some credit for setting economic conditions conducive to higher real wages (including low inflation), it has no direct bearing on the decisions of the independent commission.

The minimum wage is set by the Fair Work Commission, with annual decisions published on its website.

When it comes to average wages, Fact Check has examined a number of claims in recent months (for example, in November and August).

As previously noted, a closely watched measure of average wage movements is the wage price index, produced by the Australian Bureau of Statistics.

The index measures average changes in hourly wage and salary costs, and is unaffected by changes in the quality or quantity of work performed, or changes to the structure of the jobs market.

This measure is useful for examining average earnings at a particular point in time.

However, as the bureau notes, average weekly earnings can be affected by changes to the composition of the labour force, including the mix of full and part-time work, and casual and permanent work.

For this reason, Fact Check will rely on the wage price index as the key measure of wages growth over time, bearing in mind this is not the only measure, and that there are different ways to dissect the figures.

Where appropriate, Fact Check used the Bureau of Statistics’ consumer price index to convert wage figures into “real” terms. This provides a measure of the “buying power” of wages over time, by taking into consideration inflation.

How is the minimum wage set?

The minimum wage is set by an “expert panel” of the Fair Work Commission that every year undertakes an annual wages review.

Reviews from 2006 to 2009 were conducted by its predecessor, the Australian Fair Pay Commission.

Among other things, the panel considers submissions from key stakeholders, including the federal government, unions and business organisations.

The Fair Work Act 2009 requires the commission to consider the following criteria:

Applying the figures to different governments

Minimum wage decisions are made independently of government once a year.

In recent years, decisions have applied to financial years, with new hourly rates effective from July 1.

However, prior to 2010, decisions were taken on a more ad hoc basis.

For these reasons, it can be tricky to neatly attribute minimum wage levels to particular governments.

For example, Labor won the election on November 24, 2007 with Kevin Rudd sworn in as prime minister on December 3.

The 2007 minimum wage decision applied from October 1, about two months before Labor took over.

Fact Check has attributed this decision to the former Howard government, which was in power when the decision was made.

When minimum wage decisions do not neatly match financial years, Fact Check has used quarterly averages for the consumer price index and the wage price index that best fit the period in question.

Has the minimum wage been growing at a faster rate than inflation and the average wage?

Fact Check converted the minimum and average wage into an index, setting 2013-14 at 100 to mark the end of Labor’s term in office.

As can be seen in the following graph, the minimum wage has increased at a faster rate than both inflation and the average wage each year since then, including the partially completed current financial year.

This is consistent with Frydenberg’s claim. 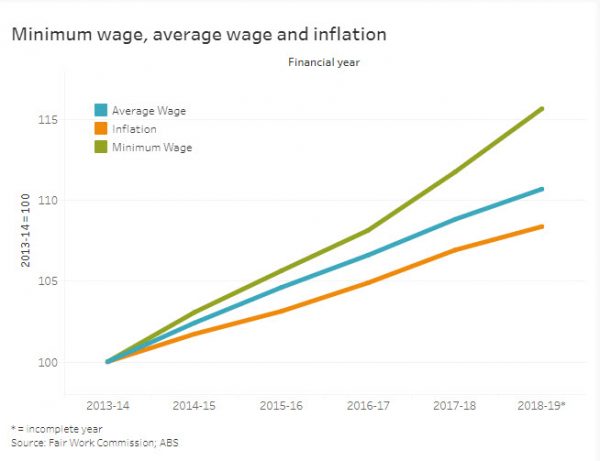 What happened under Labor?

Frydenberg also said: “Real minimum wage has gone up under us every year. Under the Labor Party, it actually went backwards.” 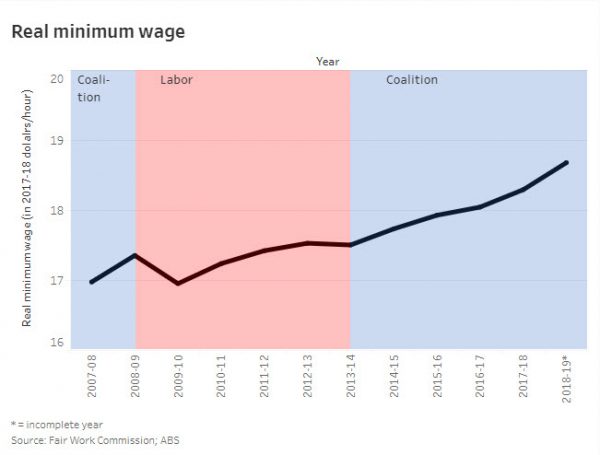 Under Labor, the real minimum wage fell in 2009-10 by 2.3% after the onset of the global financial crisis sparked concerns about rising unemployment.

This was the result of a decision by the precursor of the Fair Work Commission, known as the Fair Pay Commission, to maintain the minimum wage at $14.31 an hour.

As the chart shows, when inflation is taken into account, and when expressed in 2017-18 dollars, this decision reduced the real minimum wage from $17.35 an hour to $16.95.

As the commission wrote at the time: “The economic environment changed sharply in late 2008, following a shock to the global financial system. This has resulted in much slower employment growth and unemployment rising faster than expected, with the labour market forecast to weaken further in 2009–10.”

The commission said the decision to maintain the minimum wage had been taken because it did not want to exacerbate the risk of unemployment for the lowest paid workers.

Fact Check has attributed this year to Labor.

As the commission notes on its website, consultations for this wage decision were taken between March and June, with the decision applying from July 1, when Labor was still in office.

Despite these two annual falls, during Labor’s term as a whole, the real minimum wage increased by a total of 3.1%, or by an annual average of about 0.5%.

During the Coalition’s term, the real minimum wage increased by 6.6%, or by an annual average of about 1.3%.

Because the fall in 2013-14 was so slight, attributing that year to the Coalition instead of Labor would have little bearing on the relative performances.

Mark Wooden, professorial research fellow at the Melbourne Institute of Applied Economic and Social Research, University of Melbourne, said Mr Frydenberg was right to say the real minimum wage has risen faster in the period under the current Coalition Government than under the previous Labor government, but he was wrong to assert it went backwards under Labor.

My only other observation would be to note that growth has been particularly strong in the last two years, with minimum wages increased 3.2% in 2017 and 3.5% in 2018.

“This is well ahead of the rise in average wage inflation as measured by the wage price index, for example.”

Professor Wooden said while minimum wages are set by the Fair Work Commission “all governments would likely claim that they help create the economic conditions that are conducive for higher or lower wages growth”.

He said the fact that minimum wages have been rising in real terms, and faster than median or average wages, implied a reduction in wage inequality.

This has largely gone unnoticed, despite low wages growth and inequality being central to the Labor election campaign.

Phil Lewis, professor of Economics and Director of the Centre for Labour Market Research at the University of Canberra, said the rise in the real minimum wage was correct but had little to do with the Coalition since it was set by an independent panel.

“The government does put in a submission to the minimum wage review but recently they have been largely ignoring this and giving increases above inflation,” Professor Lewis said.

The panel has taken the view that ‘moderate’ increases in the minimum wage will not adversely affect employment.

This article was first published on the ABC.

Give smokers some credit: inflation would be even worse without them

Whether or not minimum wage has increased faster under the Coalition, it’s still entirely fair to say that the Coalition cannot claim any credit for it. After all, they have consistently sided with the business sector in arguing for low to zero increases in the minimum wage.

Good work, this article.
We can exaggerate our despair when conservatives rule – but, in general, despair we must.

Precisely my point. From all I have read, the Coalition has consistently sided with the Business Lobby on minimum wages-just as they did with Penalty Rates. So the Coalition deserves zero credit for FWA choosing to ignore them.

The fact that the minimum wage has been growing as per Frydenburg’s claims has SFA to do with the issue. You might as well just say 2% of nothing is still nothing (unless it has something to do with cash refunds and franked shares). The real question is whether this type of misdirection is actually a lie that explicitly hurts the more vulnerable whilst favouring the most affluent. Which, if true, would be a most despicable act of malice.

I take your point Itsrort, but at least Labour can begin to implement their promises from a slightly higher base than might otherwise have been the case.

Interesting, but do we pay for a Crikey subscription to read a long article we can read for free on the ABC website?