The Liberals and the United Australia Party are swapping preferences. But it looks like they're also sharing campaigners.

Shirt swap. This week the Liberals landed a preference deal with Clive Palmer’s United Australia Party, which they hope will help them get over the line in a number of key marginal seats. But the Liberals and UAP aren’t just swapping preferences, they also seem to be swapping campaigners. A Crikey tipster, as well as Ten political editor Peter van Onselen, spotted campaigners in the Melbourne seat of Dunkley swapping from Liberal to UAP t-shirts, ostensibly in order to ensure people number their preferences in accordance with how-to-vote cards. Liberal MP Chris Crewther — who holds what is, after redistribution, now a notionally Labor seat — was reportedly around while these substitutions were happening.

Have you seen this woman? Right before Scott Morrison called the election Environment Minister Melissa Price signed off on the last federal approvals for the Adani coal mine, caving to considerable pressure from the hard-right Queenslanders in the Coalition. But don’t expect to hear Price discuss her Adani decision.

Price is notoriously reluctant to give interviews — since she became Environment Minister, she has declined at least 11 invitations from ABC’s 7.30 and The Project’s Hamish Macdonald says he’s “lost count” of the number of times Price had declined an interview. It’s easy to see why The Guardian labelled Price “the invisible minister”. When Price does give interviews, they’re hardly memorable. Last year, she spoke to the ABC after the Intergovernmental Panel on Climate Change released a report highlighting just how close the threat of irreversible climate change was. Price accused the scientists of drawing a “long bow” with some of their finds, while also admitting she hadn’t actually read the full report.

Keep an eye out for us, and send through any notable sightings via the tip line!

Dishing out the dirt. The respective dirt units of the major parties have clearly been in overdrive in recent months digging up social media material on their opponents. The Liberals have been the worst hit so far, with their candidate for the very winnable Tasmanian seat of Lyons, Jessica Whelan, today becoming the third Liberal candidate to withdraw because of offensive social media posts. But where does that leave Labor’s candidate for the seat of Melbourne, Luke Creasey?

Touted a couple of months ago as a real challenger to the Greens’ Adam Bandt, Creasey has been revealed to have posted a variety of offensive sexual references and “jokes” on social media several years ago. Creasey apologised for the comments but argued they were “a number of years ago” and don’t reflect his views today. That may be fair enough… except that’s not the standard Labor demands of others.

In one of the biggest beat-ups of the election, Labor attacked Macnamara Liberal candidate Kate Ashmor over comments about public schools in a letter to the editor she wrote in 2001. For those counting, that’s more than a decade earlier than Creasey’s vile jokes. “How much worse does this candidate’s behaviour have to get before Scott Morrison takes action?” Labor’s Tanya Plibersek angrily demanded. If that’s Labor’s standard, we await Bill Shorten taking action on Creasey.

But what does it mean? In popular culture, a teardrop tattoo is a widely-recognised symbol that the wearer has spent time in prison or committed murder… It’s safe to assume this is not the case here. Rather, the whole thing goes back to the “watergate” scandal which involved Barnaby Joyce signing off on a multi-million dollar water buyback from a Cayman Islands-based company founded by energy minister, and friend of this column, Angus Taylor.

As the story slowly emerged, drip by drip, over Easter, the emojis began appearing — a symbol of anger at alleged corruption and mismanagement, fueled by a perception that the media wasn’t giving watergate the attention it deserved. The first adopters were leftie keyboard warriors not afraid to go off at their favourite journalists (see the responses to this incredibly ratioed Chris Uhlmann tweet). With Phelps and Steggall on board, the teardrop emoji has gone mainstream and is officially part of the “socially-liberal-fiscally-conservative” set.

ScoMo’s shout. While campaigning in Tasmania this week, both Scott Morrison and Bill Shorten visited Agfest, a field day celebrating all things rural and Tasmanian. Both leaders made time for a beer, because during this election campaign who wouldn’t. But according to the man behind the taps, Shorten paid for his drink and Morrison did not. 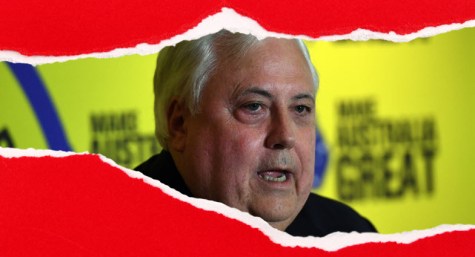 With reference to the situation of Jessica Whelan in Lyons being disendorsed for inappropriate comments, isn’t that what happened to Pauline Hanson in 1996? What happens if Whelan’s views actually reflect 50%+1 of the Lyons electorate after preferences and she is elected? Would she join One Nation? Would the Liberals accept “the taint” of her vote, as Abbot accused Labor of doing by accepting the support of Craig Thomson?
Wasn’t it LBJ who said it was better to have people inside the tent pissing out, than outside the tent pissing in?

I heard Peter Slipper (ex Speaker of House) say on ABC radio this am that he thinks this may help Jessica
Whelan get elected in Lyons, as some otherwise Labor voters may now feel free to vote for her. If this happens
god help us – the very last thing we need is another Pauline Hanson as a representative. I live in Lyons and parts of the electorate are rural, extremely conservative and in many cases poorly educated. I know this from working as an adult literacy teaching volunteer.

I spent several years working with the CES in Glenorchy back in the 80s. I know what you are talking about, Mary. I think there is every chance Ms Whelan may get up. In which case the Abbott/Dutton/Abetz faction will feel its hand strengthened in the post-election battle, regardless of the national result.

Dishing out the dirt – a common opinion seems to be that the parties should be more careful about who they nominate. I think it tells us something about the sort of person who seeks nomination.

Melssa Price has hardly blossomed as a Minister and her predilection to avoid interviews is symptomatic of someone not across their ministry. However, Ms Price is not alone. It is evident that Scomo is a one man band on the hustings as his other cabinet colleagues appear intent on saving their own skins, as opposed to promoting their party on a national scale.
The outcome should Scomo win will be a parliament of unqualified, inexperienced and proven to be incompetent ministers; and to really add to the misery the potential for assorted Nationals, Palmerites and Hansenistas to make up the Senate and really stuff the country.

Agreed, Scomo should bring out Michaelia Cash to assist. The they’d be out for a long time.

Not paying for his beer? Proof that Morrison feels entitled.

Like ScoMower* attending Steve Irons (WA member) wedding in Melbourne, along with Stuart ‘Nosferatu’ Robert, and slugging the tax-payer with that bill – payiing it back 2 years later? ….. Something 7:30 forgot to remind us of, re his “claim to fame” when going over the field for Swan, last night.

(*”Turn promises into chaff – with a ScoMower”)

I don’t subscribe to this theory that “Price succumbed to considerable pressure from the hard-right to wave Adani through”.
Because :-
a) It goes against all her previous form as a miner’s canary…..
b) Not only that it makes her out to be a “victim”, having some concern for the environment, but forced to comply with party bullies (“men”?)?
c) And that there was a chance that she’d knock Adani back?
Seriously? With her track-work?