Over a hot cup of marshmallows, the glistening Labor leader tells all about loving to pull miners out of mines and on the fair distribution of goes.

Shorten HQ, the nerve centre of the Labor campaign, is an impressive place. Set up in a disused aircraft hangar, once you enter you see rows of desks stretching away into the distance, each one manned by an ALP volunteer working the phones. “Some of them are canvassing voters,” Shorten’s campaign manager tells me. “Some of them are coordinating schedules with Labor candidates. And obviously some of them are selling merchandise: Bill t-shirts, tea towels, cravats, and so forth.”

But the most impressive thing about Shorten HQ is Shorten himself. He approaches with a broad smile and offers a bone-crushing handshake. He’s taller than he looks on television — around six foot nine — and is glistening with sweat, having come straight from his morning workout. “I make sure to do it every day,” he says, “because I know Australia wants a strong leader, and I take that very seriously and very literally.”

We sit down to chat beneath one of the numerous motivational posters dotting the walls. This one is a photo of Shorten’s political idol, Simon Crean, bearing the traditional Labor slogan, “He Who Hesitates Is Electable”. The opposition leader drinks from a mug of hot chocolate while we talk, pausing only occasionally to add another marshmallow.

I ask him the same question I ask all powerful men, the question that fascinates me more than anything: just why does he want to be in charge? He considers the question carefully, and answers thoughtfully: “Ever since I was a little boy,” he muses, “I have been incensed by injustice. I remember being five years old and seeing a family of 12 who lived across the road thrown out onto the street. I remember thinking, even then, that it was unfair, that you should be able to have a family of at least 18 before you were thrown out onto the street. I guess that’s when my passion for cautious incremental change was really ignited.”

Does Shorten believe his close links to the union movement are a hindrance in the campaign? He throws back his head and laughs, a deep booming laugh like a giant of legend. “I don’t think being connected to unions will colour people’s opinion of me at all,” he chuckles. “I think Australians are fair-minded enough to understand that I have never belonged to a union or met a union leader. I only just heard of the union movement last week, in fact.”

So if not organised labour, what does Bill Shorten stand for? At this, his face takes on an earnest aspect, and his eyes fill with tears of sincerity. “Most of all I care about Australia,” he sobs. “All I want is for Australians to get a fair go. Scott Morrison says to get a go you have to have a go. Well I say we are having a go, but we’re not getting a go, and that’s because every time we have a go, Scott Morrison keeps that go for himself. It’s time the Liberals stop hoarding the goes and release the goes for ordinary mums and dads who have been having lots of goes constantly. That’s what I stand for: more even distribution of goes.”

But isn’t that socialism? He winces. “I don’t like that word.” What word would he prefer? “Hero. I quite like the word hero. You can call me that if you like.”

Speaking of which, what part does he think the Beaconsfield mine disaster has played in his rise to the top? He pauses for a moment. “I don’t think,” he says carefully, “that I’m Labor leader because of Beaconsfield. Certainly I didn’t do it for the publicity. I did it because I love miners, and I love spending time with miners, and I love pulling miners out of mines. The Government can call me a miner-lover if they like: it’s a label I wear with pride.”

And will he win? He laughs at the question. “It’s in God’s hands now,” he says, pointing to the poster of Crean and blowing a kiss. He turns on his heel and sprints wildly out of the hangar. Running to glory…or disaster? Time will tell, but whatever awaits Bill Shorten, he will meet it with courage, honesty and commitment. He truly is having a go. 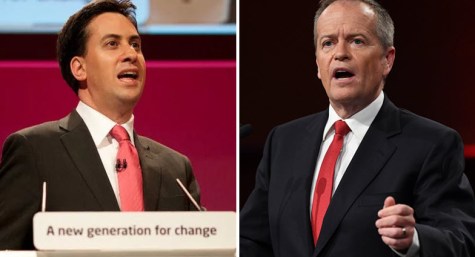 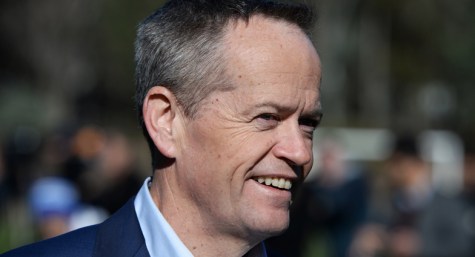 Rather unkind Ben, but quite funny – “passion for cautious incremental change” gave me a good belly laugh, even while realising that such caution is still viewed as reckless communism by other commentators in the MSM.

Not so much reckless Communism, Fairmind, as incrementally injurious to their profit margins.
One has to make up for the general losses of newpaper ownership somehow.

“He Who Hesitates Is Electable”, is also none too shabby.

I also thought that a winner.

Pity Ben you did not ask him why he did not think Kevin Rudd and Julia Gillard could not continue having a go!

I don’t suppose they’ve got any Bill folds, or Bill hooks …… washing day can be such a drag.

…. So which miner party is this bloke the leader of?