Helen Haines’ candidacy is bold, and has to be. She's looking to succeed Cathy McGowan and show that an independent can succeed an independent, a first in Australia.

This is part one of a two-part series from Guy Rundle on the battle for Indi. Part two to come.

It was full to bursting at the long Forum room at the Huon Hill Hotel, a schmick new pile on one side of Wodonga. Shiny glass and steel, crazy-pattern carpet like the seats on trains, a fire flickering in the faux-trad lounge, deep chairs, a writing desk, etc.

They’d been arriving for an hour or more, town locals, and those driving in from further out, hybrids and utes commingled in the car park. Now, ahead of the candidates’ forum, two or three in bright red, were talking to 25 year-old Eric Kerr, another of Labor’s babyface-killah candidates, nervously making a note or two. A dozen or so Nats in the green-n-yellow they’ve adopted, older folks, less than comfortable in windcheaters, perhaps wishing it could be Fletcher Js and a nice frock. They’ve overdone it on the yellow; together, they look like a hand of chiquita bananas, which is surely not the intention.

But the largest contingent, a whole bank of seats, is brilliant orange: the Helen Haines (i.e. Cathy McGowan) team — T-shirts, scarves, the works. They look like a bushfire, they know everybody there. Everyone’s settled in for the Border Mail candidates’ forum, introduced by the editor… my god that man is tall. Country brick shithouse tall. I bet he was the high school footy hero, married the netball captain, has an antique wagon wheel leaning on the side of his house. Could be wrong.

“Yeah, well, uh, thanks for coming to what promises to be a torrid tussle…” What’s missing? Ah, no welcome to/acknowledgement of country. Haines, a tall bespectacled, elegantly coiffed blonde, former nurse, matron, administrator, gives one, trying to keep a tone of reproach out of her voice. We settle in for a contest of ideas, expectation. The first question from the Border Mail panel: “Now, the 80 kilometre speed limit on the something exit…” There is a sigh of disappointment from the back. It’s left to Greens candidate Helen Robinson to put voice to it: “Well I use that intersection too but look AREN’T THERE MORE IMPORTANT THINGS TO TALK ABOUT!”

Wodonga. Haven’t stopped here for 45 years. Came with my dad, on the train. He was an accountant, doing the accounts of the Terminus Hotel. We walked there with a suitcase from the station. The railway has been moved. The station is a café now. Memory seen through sepia. At the pub, they’d known his dad, a greyhound runner and SP bookie. My country, now I think of it, grandfolks born in Deniliquin and Echuca, bouncing round the region through the Depression, flit to flit. In Wodonga, it’s all gone. The Terminus vanished, the rails moved, great swathes of the centre pulled down for a Coles, the high street being redbricked, the whole swathe of shops gone. “Nice to see the place freshened up,” says the woman in the newsagent. I guess, but it feels like the town has uprooted itself.

Helen Haines, at the forum, hits the big picture early, talking climate change and the promise of renewable energy as a new industry for the region. Steve Martin, the improbably named Liberal candidate — army, four kids, “they still laugh at my jokes”, but no one laughs at that — talks up his ability to be “at the table of government”.

“Except you won’t be in government,” someone says audibly, which stuns him a little. The Nat candidate, Mayor Emeritus Mark Byatt, begins by apologising for a campaign tweet about Haines. Solid start. Solid. The talk lists heavily towards clientalism: who will be the governor best placed to get gold from Rome?

Half an hour out of the station, someone offers to hook me up with ice. No comment on the town, or not much. People just think I look like the meth type. Later, in the haberdashers — wood-panelled, folded shirts in fitted shelves piled to the ceiling — getting a new T-shirt, two women come in, brown perms, overcoats against the slight chill, ask for “winter pajamas”.

One notes the date in a diary, licking the tip of the pencil, before starting to write.

Haines is confident, commanding, has the details at her fingertips. When your correspondent throws in a question as to why the forum had become an episode of “let’s make a deal to get cash”, and what suggestions the candidates could make for self-starting projects, the Lib and Nat waffle — rural “free-enterprise” parties, bred over generations, so they’re like greyhounds, all ribs, prick and hunger. Babyface Killah says, honestly, that he hasn’t thought of it, but will, and Haines reels off current and future initiatives, interfacing with the Voices For Indi group, such as Totally Renewable Yackandandah, if I have that right.

Haines’ candidacy is bold, and has to be. She’s looking to succeed McGowan and show that an independent can succeed an independent, a first in Australia, and without starting some bogus party that would collapse in 18 months. She’s doing it with Voices For Indi, with the idea that a community network can represent.

It’s a hard ask. McGowan’s initial campaign was spurred by Sophie Mirabella’s perceived status as an enforcer of national policy, on a region she’d carpetbagged into from Melbourne Uni student politics. Incredibly, the Libs renominated her in 2016. McGowan’s two terms may have been enough to establish legitimacy and continuity, but this is a new place, an old place — haberdashers and ice — and the pull back to the old parties is strong, whoever they stand.

The sole furnishings shop, founded three centuries ago, the roast carvery full of permed pensioners getting the Tuesday special, the sepia photos of what was there affixed to slab-tilt supermarket walls, moustachieod men, buried in sacks of wheat, staring out unsmilingly. No Aboriginal people at the forum — or speaking up anyway — and no mention of such. Six people vox-popped on “the biggest issue for the area”. Three say mental health services (two trains, one housing). Settler territory, unsettled. Time and history move at no one speed — the café in the old station, the vanished hotel, memory dissolving to sepia. Ice and haberdashery. If it returns Helen Haines on May 18, Indi will suddenly be the most advanced place in the country. 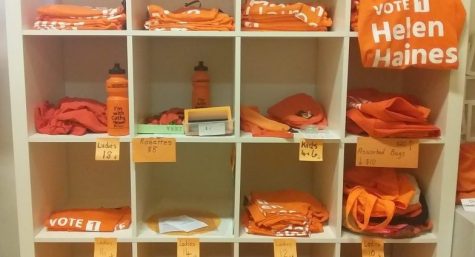 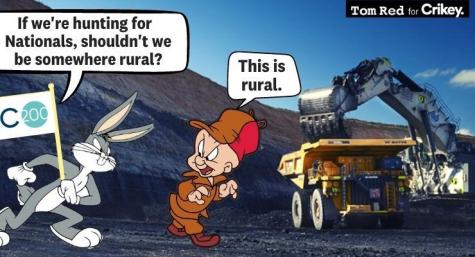 Country independents join their city cousins on the march to Canberra

Yeez, you’re a cynical bastard, but OMG I love your writing.

Keep ’em coming, Guy. Your reports take us there.

Town locals had been arriving for an hour or more. You know them, by their wristwatch they always know the time as they always carry a watch on their wrist as they have always somewhere to go, on time. Citified they are. And those from further out, the poorer folk who know the time by where the sun is in the sky, and are just a step down in status, have to watch their step as they are hybrids, not so well bred and their dusty aging utes that have needed a wash and shine for the past month. They arrived. They all came together in a group of camaraderie, yelling out in an animated way “Oh Jay I have not seen you for ages, give Auntie Fay a great big kiss.” “My, my you have taken off weight.” “Oh you have always liked my figure, you naughty man you.”
The togetherness and the shaking of hands were the pleasantries before the start of the candidates forum. People everywhere. People, two or three in bright red, were talking to 25 year-old Eric Kerr, another of Labor’s babyface-killah candidates, nervously making notes. A dozen or more Nats in the obligatory green-n-yellow as if they were playing for Australia, were in uniform, they were older not at all comfortable in wind cheaters, perhaps wishing it could be smarter cloth from DJs and a nice white frock. The yellow was overdone more yellow than green; together in a hand could be like cavendish bananas that surely was not of their planning.
The roar of light plane overhead it was coming in for a landing. Just the right day for it, don’t you think, yes just right well gee it was was right wing, and we were winging it. Darling, champagne. Yes I will.

Speaking as an Indi local, you prove why Guy gets the job.

We were somewhere around Barstow, on the edge of the desert, when….

Thanks, Guy. Enjoyed this one. For some reason, it brought to mind Patterson’s “Been There Before”.