The violent underworld of the internet gets a plug in Adelaide's paper.

Four Pete’s sake. In an otherwise fairly standard wrap of why a Clive Palmer policy won’t actually work, The Advertiser has included various graphs and diagrams detailing voter sentiments, including one collecting positive and negative reactions to various party leaders across “social media” from April 14 to 17. One percentage that caught Ms Tips’ eye was the unusually high rating allocated to a certain obscure Queensland senator and Nazi-talking-point-enthusiast who polled equal first with 30% positive reactions. A quick look at the sources gives an indication as to why that might be — it takes in YouTube, Twitter, Facebook and 4chan.

That’s right, 4chan (or “Fourchan”, by News Corp’s style guide), the “discussion board notorious for being a watering hole of racist and sexist trolls“. The site that was blocked after it refused to remove footage of the Christchurch massacre. The site that has, for years, deliberately spread misinformation, misogyny,  murderous transphobia, and is linked with the mainstreaming of Nazi talking points. That 4chan. While there is no shortage of unpleasantness on Facebook and Twitter, it is still staggering that News Corp would include this cesspool in a survey of what mainstream Australians think.

Adding up Watergate. If you’ve followed the Watergate scandal you’ll know that the Cayman Islands-linked outfit at the centre of the bizarre $80 million deal to tear down levees it should never have erected in the first place, Eastern Australia Agriculture, is also a Liberal Party donor. The Herald Sun reported that the company donated $55,000 to the NSW Liberals in 2012 and 2013 (donation details here). Except EAA didn’t give $55,000 to the NSW Liberals. It actually gave $65,000, because it gave another $10,000 to the NSW Liberals in August 2010. This donation was not picked up by the Australian Electoral Commission because it was below the Commonwealth threshold put in place by the Howard government to hide donors, and which remains in place today.

There’s some extra irony in that donation: it went to the water guru of Australian politics, Bill Heffernan, long a critic of Queensland cotton farmers and levee builders who took water before it could enter the Murray-Darling basin (he more than once had bitter fights with Barnaby Joyce on the subject). Heffernan was also an opponent of water buybacks. Heffernan told New Daily this week that “I don’t know who they are” about EAA. Which might be a strange thing to say given he once received a $10,000 cheque from them, though it’s not surprising — Heffernan was one of the NSW Liberals’ chief fundraisers back then (and not averse to going after his own colleagues if there was something dodgy about a donation). Whichever way you slice it, EAA certainly got value for money for its contributions to Coalition coffers, ultimately making more than $50 million on the deal.

Gaffewatch. Whenever it’s said that someone was parachuted into a seat, it’s worth remembering that a reasonable number of parachutists died almost immediately, smeared by trees, shot by enemy lookout, or just going splat. Which brings us to Nyunggai Warren Mundine, running for the Libs in Gilmore on the NSW South Coast. He appears to have dropped the “Nyunggai” for the duration, and a few other clangers as well, such as noting that “I could be called a pimp … because I’m living off the earnings of my wife at the moment.”

It’s worth reading that twice, because it’s such a multi-part gaffstravaganza. Not only is sharing the paid income load with a woman some form of parasitism, but any woman so doing is a sex worker.

Outstanding work, giving visions of Mundine in pink felt fedora and fur-lined floor length drape coat a la Starsky and Hutch‘s Huggy Bear (Warren, if you wear this, Ms Tips will come to Nowra and canvass for you). Could it get better? It does, for Mrs Mundine, the third such, is Elizabeth Henderson, a high-powered lawyer in her own right, and daughter of Gerard — whose reaction to seeing his son-in-law call his daughter a sex worker is not recorded. Suffice to say, we don’t think it’ll make it into Media Watch Dog. Mundine — an ex-ALP president — faces a divided Liberal Party, an independent challenger dumped from preselection, and a Nat candidate backed by the outgoing Lib, Ann Sudmalis.

No Labor of love. After hearing Labor complain about Liberal Party candidates distancing themselves from the party’s branding this week, Ms Tips was surprised to see a similar tactic employed by Labor’s deputy leader Tanya Plibersek in some of her letterbox drops around the seat of Sydney. Shunning the usual Labor-red, Plibersek’s team has distributed purple pamphlets touting her commitment to climate change, and you need to squint to spot the Labor logo in the corner one side. When you flip overleaf, you need to actually read through three lines for the first mention of the party. Leader Bill Shorten has also been noted as missing from other candidates’ election material. 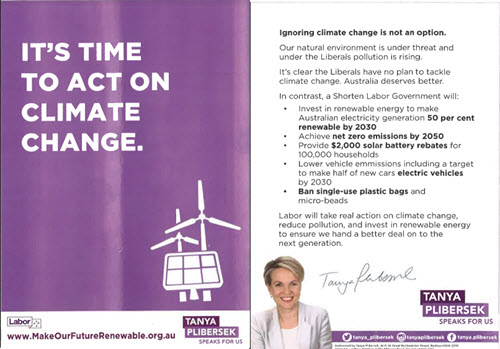 Heard anything that might interest Crikey? Send your tips to [email protected], use our anonymous form or other ways to leak to us securely.

Well might Mundine drop the Nyunggai bit. He certainly never preached his heritage much when he was in Dubbo 30 odd years ago. His first wife was a nice woman, but not clamorous enough for a rent seeker. Mundine is a first class bullshit artist and has been since I met him back then. None of my 40 or so Koori friends and acquaintances would vote for him in pink fit. They remember. One of the elders used very rude words in fact.

Tanya is really showing confidence & support for Shill Broten and why would she want to be too close and sucked into the empty void?
There is a wonderful pic him in the grauniad by Mike Bowers showing him as a black hole, rimmed by light.
https://www.theguardian.com/australia-news/2019/apr/26/campaign-catchup-2019-morrison-falls-into-a-coal-black-hole