The Murdoch family members working against the Fox News agenda

The New York Times' recent investigation into the Murdoch family described James and Kathryn's more progressive leanings as one of the reasons for tension within the family.

The fractured relationship between Rupert Murdoch’s children has again been in the spotlight this month after The New York Times’ extensive investigation into his empire was published three weeks ago. Among the many juicy details in that series of stories was how the younger son James and his wife Kathryn have been distancing themselves from the conservative agendas of News Corp’s media outlets, including Fox News, as well as from the family patriarch.

The relationship between James and his big brother Lachlan has often been reported as tense, but the Times described James and Kathryn’s more progressive leanings as one of the reasons for tension within the family.

When Trump announced his travel ban on Muslims in 2017, it was reportedly James and Kathryn that pushed executives at the family business to put out a statement of support for their immigrant employees. It was ultimately watered down, and when Trump’s response to the Charlottesville violence suggested responsibility on “both sides”, Kathryn and James put out their own statement condemning the president’s response, even as Fox News blamed “the media” for the violence. But the couple’s discontent with how News Corp and its outlets are perceived has been in the making since well before Trump’s election.

News Corp has been long-criticised for peddling anti-climate science theories across the globe, and Fox News is a cheerleader for and the preferred news provider for Trump — he has a close relationship with host Sean Hannity, and a number of Fox staff have moved across to his White House. Meanwhile, James and Kathryn have been working on projects that directly counter those messages.

In 2014, Kathryn and James founded Quadrivium, a foundation that says its mission is “to invest in root cause solutions for some of society’s most urgent challenges”. Among those “challenges” are things where the foundation’s perspectives run contrary to News Corp’s: climate change, democracy and scientific understanding.

The foundation is specific about working in a bi-partisan way — something foreign to Fox News and some of News Corp’s newspapers, both in Australia and overseas. It’s funded a program to provide scientific expertise and context to journalists, as well as other environmental causes and anti-hate group the Anti Defamation League.

This year, the foundation announced it would focus “significant resources” on finding and implementing solutions to problems in the democratic process including structural changes and voter participation. As well as being president of Quadrivium, Kathryn is a director at progressive organisations including Unite America (a nonpartisan group working to help “common sense candidates” be elected), and a trustee for the Environmental Defense Fund.

A Financial Times report last week revealed that James was looking to invest in media companies outside News Corp, including the option of a “liberal news site”. Sources told the newspaper that James “wanted to distance himself from the conservative media outlets controlled for decades by his father but had yet to decide how exactly he would invest in the news media”. James’ disdain for some of the Fox News agendas has been clear for some time, having reportedly told friends he’s embarrassed by some of the content the network produces.

Last year, Kathryn again raised some eyebrows by tweeting support for De Correspondent’s fundraising drive for an international edition — something the publication called “unbreaking news” in opposition to how “news as we know it leaves us cynical, divided and less informed”. She has also used her Twitter profile to support Fox News critics. In September, she retweeted (and commented with a “Well said”) a Washington Post article heavily criticising Fox News host Tucker Carlson who’d railed against diversity in one of his programs.

One of Quadrivium’s focuses is climate change, which reflects Kathryn’s background and experience in the area. She’s worked with the Clinton Climate Initiative and much of her work (and Twitter content) relates to climate, ocean science and science education, and always from the progressive/believing-in-science perspective — in direct opposition to where Fox News and many of News Corp’s publications come from.

Kathryn also has a longstanding relationship with the Clinton family. She worked for the Clinton Climate Initiative for five years, and reportedly was trying to set up a meeting between the Murdochs and Democratic candidate Hillary Clinton ahead of the 2016 election to garner support for her from News Corp, over Trump. The company’s outlets hadn’t supported Trump in the primaries, but Fox, in particular, turned to fiercely cheer for him after he won the Republican nomination. 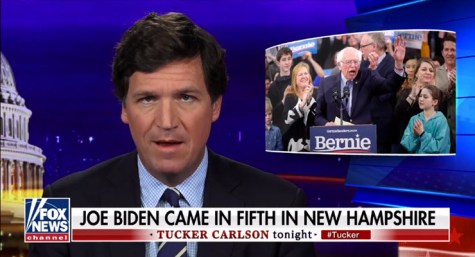 Unfortunately James Murdoch has no strong links to Oz otherwise he might consider mounting an ethical news organisation here to counteract his father’s efforts.

Re the Murdoch and what shade of libertarian each member is, do remember everything is relative [sorry]. James may possibly be less libertarian than Lachlan, although that is hard to see frankly. Even if true, that does not tell us anything encouraging about any of the male Murdochs.

Don’t forget it was that old lefty James who gave the speech in 2009 attacking public broadcasting [in this case the BBC not our ABC] where he included the immortal line ‘The only reliable, durable, and perpetual guarantor of independence is profit.’ Yeah. Nah.

I suppose there could have been Road to Damascus moment. Could James be turning out like Grandma Elizabeth (the only good Murdoch I know of, being decent, though dead and not a genetic Murdoch) anyway.

If this is even half true then it is certainly good to hear.
Agree with Zut that James would do this country a favour as it is in desperate need of a decent news service.
OGO – I think that daughter Elizabeth has long shunned the clan’s malign embrace.
Pity that both she & James continue to benefit from its filthy lucre but they could yet use it to undo some of the damage it has done.