One Nation fans hit up GetUp in Western Australia

It was a battle of the orange t-shirts in Perth this week.

One Nation fans hit up GetUp. On Tuesday night around 100 people half-filled the Perth Town Hall for GetUp’s WA launch. Among them were a handful of rather loud individuals sporting One Nation shirts. When signing in, attendees were handed a sticker which said “Let’s avoid a car crash … DON’T VOTE LIBERAL”. A cynic might read this as a call to vote for the Nationals, Palmer United and/or One Nation. Who said GetUp was just an ALP front?

The message was largely the same as other events around the country: that it was time to remove the “toxic politics of the hard-right” from parliament. Now that GetUp appears to be more cashed up, the number of targets (Abbott, Dutton etc) appear to have doubled and the hit list now includes moderate Victorian MP Greg Hunt as well as Attorney General and West Australian Christian Porter.

Newly appointed GetUp general counsel Zaahir Edries was among the speakers. Edries’ youth (relative to most people in his audience) was no bar to him connecting with his listeners. He described the election as a once-in-a-lifetime opportunity to step hateful extreme ideologies that “have already spread and taken root in the US, UK, India and Brazil”. He spoke of arriving as a kid from Apartheid South Africa 30 years ago and growing up in Perth listening to Pauline Hanson railing against Asians and Indigenous Australians, then watching “far-right” Liberal MPs adjust their messaging in a far-right direction “just to recover support from the few votes they lost to One Nation”.

By now, the handful of Hanson supporters out the back must have been fuming. What really set them off was a video message from Bernie Sanders. One bloke screamed out “George Soros!” and “foreign influence!”. The rest of the audience were very well-behaved and resisted the urge to respond with “NRA”.

Old news. On Tuesday Australia woke up to the saddening news that Notre Dame cathedral in Paris was in flames. Fortunately firefighters were able to save much of the 13th century Gothic structure and, at this point, evidence suggests the blaze was purely accidental. But because the internet is hell, it wasn’t long before conspiracy theories about an Islamist attack on western civilisation began floating around the internet.

But the Notre Dame conspiracy theories weren’t just being pushed by reactionary YouTubers. A Guardian article from two years ago about a failed Islamic State plot to attack Notre Dame began doing the rounds and, at one point on Tuesday, was the fifth most read story on its website after four stories on the actual attack. 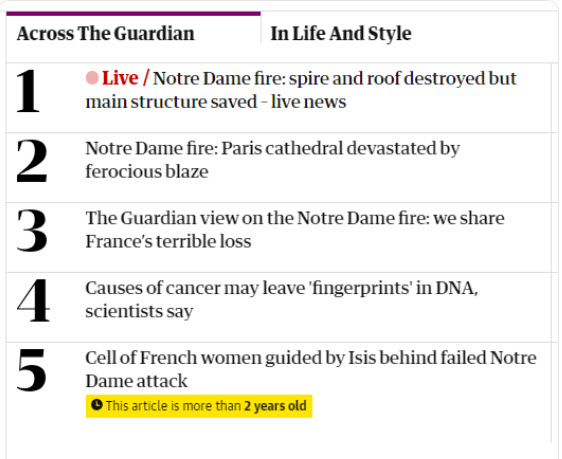 The Guardian’s website gives prominent warnings when an article is out of date, but clearly that did not stop this one being shared and racking up the clicks. It’s just another reminder of the poisonous influence of disinformation in our politics and media.

An ugly mug. The Liberals have long been worried that their election coffers are running low. Luckily, the party’s website now offers a range of merchandise including this incredibly cringeworthy, US election-style mug. It could be yours for a cool $30. 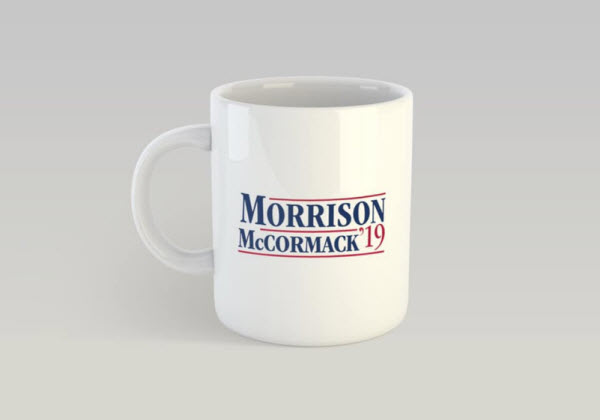 Kiss Your Money goodbye. According to reports in Mumbrella and Ad News yesterday, Your Money (Channel 95 on the FTA system) is set to close its digital operations and reposition itself after six months on air. Your Money was formed last year as a joint venture between Nine and News Corp, but both newspaper groups seemed to miss the story for yesterday’s editions…

Your Money focussed on markets content when trading was happening, then switched to lifestyle content (property, wine, living well, health) outside those times.

Nine boss Hugh Marks gushed about the content upon its launch last year:

We are thrilled to partner with Australian News Channel in this exciting joint venture. Our ambition is to take business and finance news reporting, and turn it on its head. We want to re-energise it, giving our expert journalists and commentators a brand new platform to lead the way in the Australian business market.

This joint venture presents exciting opportunities for News Corp, for Australian News Channel and for Nine to take a leading position in both the business and consumer markets.

Yesterday there was silence from those heavyweights, and CEO of Your Money Kylie Merritt sang the same song to Mumbrella and Ad News:

Since Your Money launched six months ago, we have been testing content genres and formats, as well as working closely with our shareholders on audience growth. As a result, we are making changes to our digital strategy to integrate our website content into News Corp platforms, where our most popular content is aligned with those existing audiences.

So Your Money was a six-month test-bed for programming ideas that failed, and failed to find viewers. It wasn’t even included in the daily OzTAM ratings (fear of laughter from the industry?). No wonder News and Nine were silent in the news on Thursday.

Heard anything that might interest Crikey? Send your tips to [email protected], use our anonymous form or other ways to leak to us securely.

With regard to the cause of the fire at Notre Dame Cathedral, has any thought been given to the possibility it might have been Divine retribution – the Almighty showing his disgust with the way the Roman Catholic Church has dealt with the paedophiles among its ranks?

Can we have a moratorium on descriptions of any Liberal MP who served in the Abbott, Turnbull or Morrison governments as “moderate”? It’s especially grating for someone like Hunt who was Environment Minister and personally played a part in demonizing environmentalists to be described as “moderate”. This labelling is how the right wing does so well. Just as they got the entire press gallery to buy into “carbon tax”. If someone like Hunt is moderate, if someone like Morrison is in the “sensible centre”, then they’ve defined everyone in Labor and the Greens as some kind of hippy dippy extreme lefties by comparison… funny about that.

Also the next journalist to describe this government as “centre-right” should get a swirlie.

Quite right. Hunt was one of the leaders of the anti-Turnbull coup. Whether this was for motives of personal gain or of ideology, he has foregone the right to be called a “moderate”.

The gHunt is moderate? He is a perfect example of someone who sold his principles for advancement – his uni thesis was the best ways to counter AGW but he attacked, succesfully, any attempts to do so.
The very definition of meretricious.