Good morning, early birds. Today in the election campaign Labor is expected to focus on Indigenous health and climate issues, and South Australian independent senator Tim Storer will not be seeking re-election next month. It's the news you need to know, with Chris Woods.

Bill Shorten will today announce a $115 million, four-year Indigenous health package aimed at closing the ten-year life expectancy gap. The Sydney Morning Herald reports that the package will include a $29.6 million mental health plan that, following concerns the Coalition’s $12.5 million plan could be absorbed by mainstream services, Shorten promises will be “co-designed with and led by First Nations peoples — driven by the Aboriginal health workforce”.

Meanwhile, The Australian’s ($) claim that Labor’s carbon credit policy could cost up to $25 billion by 2030 and The Age’s report that the party will not implement new cuts for workers between $90,000 and $120,000 should only add to ongoing financial campaign fights.

Citing family reasons, South Australian independent senator and former NXT member Tim Storer will not seek re-election next month — in a decision that puts his term at just 400 days in Parliament.

The ABC reports that Storer, who fell out with Nick Xenophon and replaced s44 victim Skye Kakoschke-Moore last March, would have faced an uphill battle as an Independent come May and mention his opposition to the Coalition’s $36 billion company tax cuts, the electric vehicle inquiry and medivac bill as career highlights.

Multiple north Queensland newspapers have run front pages and open letters calling for politicians and candidates at all levels of government to clarify their positions on the Carmichael-Adani coal mine.

The Townsville Bulletin, Mackay Daily Mercury and Rockhampton Morning Bulletin all report that Townsville Enterprise and 20 local businesses are calling for political pledges to open the Galilee Basin for coal mining, in a letter also citing the region’s (six year) increase in unemployment.

The GetUp! national director makes a few mistakes while mistakenly implicating the Treasurer (!) in the last leadership spill.

“Bill Shorten had a ragged media conference in the Adelaide seat of Boothby yesterday. He claimed Labor had no new or increased taxes on superannuation — technically correct, but several proposed rule super changes will raise more revenue — and a journalist got stroppy when the Labor leader refused to answer a question about the impact of Labor’s climate action policies to achieve its more ambitious emissions reduction targets.”

“When Australia and Timor-Leste finally agreed to a permanent maritime boundary last year, it seemed like the protracted dispute over lucrative oil and natural gas reserves in the Timor Sea might finally be resolved.”

“Just days after a Federal Court judge heavily criticised the journalism of News Corp’s Daily Telegraph over its Geoffrey Rush ‘scoop’, the company’s CEO has let loose at The New York Times for a ‘hatchet job’ on the Murdoch family published last week.”

Peru ex-president shoots himself in the neck during bribery arrest

Melissa Parke incident raises difficult questions about Israel — Tony Walker (The Sydney Morning Herald): “Sadly, and too conveniently, a charge of anti-Semitism is used to stifle reasonable criticism, and, yes, to intimidate those who would question Israel’s actions. Melissa Parke, whose sympathy for the Palestinians is well documented, is the latest casualty, leaving aside the truth.”

Labor suddenly looks exposed ($) — Phillip Coorey (The Australian Financial Review): “If the first week of the election campaign confirmed one thing it was that Labor suddenly feels exposed. If only because of the contrast with the Coalition which is campaigning on a platform of promising to do very little if it wins a third term of government.”

Traditional owners still stand in Adani’s way — Kristen Lyons and Morgan Brigg (The Conversation): “This unique unspoiled arid oasis — fed by fresh groundwater — is under threat from the proposed Carmichael mine. For W&J people, the Doongmabulla Springs are their most sacred site, from which the Rainbow Serpent, or Mundunjudra, travelled to shape the land.” 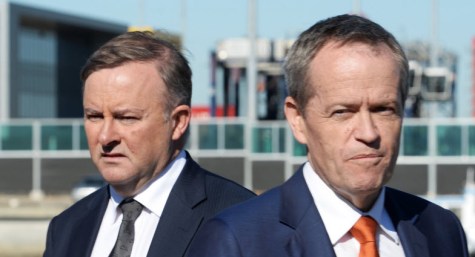