The slow burn of the gilets jaunes

Our correspondent-at-large reports on the simmering tensions in Paris amid the yellow vest movement.

Boulangeries. That’s what always gets me. You’re rushing through some side street to a demonstration or a political rally, hardware store owners and jewellers are winding down their metal shutters, but the cake shops are stalwart. In this city of immense violence — the place that invented the barricade and the struggle for the city — coming through the side streets of the 10th arronidsement, one still passes windows full of eclairs in brown and green icings, petits fours dripping in marzipan, cream horns, the works. Still, I couldn’t help but notice that many of the people walking beside me were carrying gas masks…

We all came into the Place de la Republique, the habitual radical gathering place in the inner north-east, midpoint between bourgeois Paris, black Paris and hipster/rave/anarchist Paris. There were a couple of thousand gathered there by late morning, but only a few hundred in the hi-viz yellow vest, the gilet jaune. There were buskers, clowns, mimes — this was ground zero for annoying political theatre — and quite a few black-clad, black bloc anarchists, scowling and looking like they weren’t going to put on some crappy yellow vest for no one. Plus journos, bloggers etc from across the world. Lotta gas masks. Army disposal stores have done a roaring trade. But nothing much was happening.

“Excusez-moi,” I asked an actual yellow-vest, a heavy-set middle age man, who looked quasi-official. “When commence the eventments?” (all translations literal from here on).

“Ah that will be quiet today, the thing,” he said. “There is an arrangement.”

“Yes. One make the preparing for the days in May.”

This was week 22 of the gilets jaunes protests and, as it turned out, in Paris it was a fizzer. There were bits and pieces of argy-bargy, but none where I was. Paris and Toulouse were to be the only major gathering places this weekend, and in Toulouse it went off. But in Paris, they kept the powder dry.

The city had seemed suspiciously quiet, as I’d come down from the Gare du Nord through the 10th that morning. But the 10th is black Paris, substantially uninvolved with the gilets jaunes (just as black people are largely conspicuously absent from UK Brexit protests, either leave or remain — in both the French and British cases, it could fall to a basic refusal to give such causes the legitimacy of universality, I suspect, when the division by race remains so strong). The cafes buzzed, the little shopping streets gleamed, the eclairs beckoned, the temptation to just slide into Paris grew.

“Is it that there will be a confrontation?” I asked a fellow bystander, an academicky-looking dude in his forties wearing natural fibres, red beard. Really, how do you ask, politely: where’s the biffo I was promised?

“Ah I think there has been an arrangement,” he said in perfect English. Turned out to be a pol-sci academic from a minor provincial French university, an Anglophile — “I very much admire your Tony Blair” — who was here, like so many of us, for the spectacle of the real. This was some real Debord/Lacan/Houellebecq shit right here: the event being everyone being here for the event. He was right enough though. Word was that there had been informal negotiations between the non-leadership leadership of the gilets jaunes and the government to wit. Any repeat of the recent café burnings etc would have the military out en masse, and the movement treated like criminals.

The core of the gilets jaunes — this leaderless network of angry everyday people, is of course to some degree steered by anarchists and Maoists of decades-long pedigree — took note of the fact that, for all their media celebrity, they remain solidly opposed by much of bourgeois and provincial France. There’s a fear of the possibility of total chaos, a feeling that comes from having lived through it in recent history.

But the tactical retreat is no surrender. Last week, there was a brief national conference of gilets jaunes reps to affirm that the movement was continuing, and that it was not going to be boxed into simple workerism. They aimed to highlight the global ecological catastrophe too, and hook up with groups like the UK’s nascent Extinction Rebellion, which this week have been blockading London traffic. As the GJ’s communique said, the end of the world and the end of the month (i.e. the paycheck you cant live on) are the same thing…

Morning wound into afternoon. We marched down one street, and then another. There was an aimlessness to it. I spoke to GJ’s — to a teaching assistant who can’t live on her wage “but still I sometimes have to buy exercise books for the poorest kids; what can you do?”, to a shopkeeper from a village who ran three stores at a minimal profit and was thus suddenly squeezed, an original GJ. Macron had cut a wealth tax and raised a fuel tax and, when challenged on the latter, had used the ecological crisis to justify it while handing back cash to corporations (oil and gas ones among them). Those squeezed by it had taken the hi-viz vest out of their car boot — every French driver must have one — to signify an emergency. The emergency was that Macron had been voted in by a vast coalition of left, centre and right antifascists on the promise of a new, genuinely social, path to institutional change. Instead, he had simply brought in a bunch of neoliberals, gone the standard route, addressed the public from behind a gold-leaf desk.

The gilets jaunes went quiet this week as they plan a week of rage and mobilisation in May, and that will be a thing. I took the evening train to Beauvais for a flight out the next day. Sunday night I hit Luton, the anti-Paris, checked in and slept for about 18 hours straight — a delayed reaction to three weeks of Brexit.

When I woke and turned on the TV, Notre Dame was on fire. That felt like some sort of warning; if we can’t work this out, everything we love will be consumed. I watched the spire fall, in horror and wonder. What can one say when, beyond the frivolities and fripperies, stone is no defence against fire, and will be brought down just the same?

Signs of the apocalypse 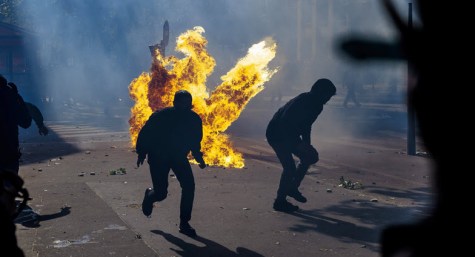 Rundle: on the troubled streets of a France that’s burning 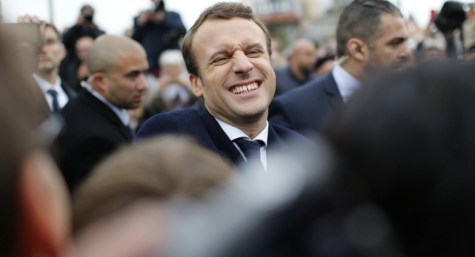 Fear not, Guy. The Vatican need only sell a couple of statues from the repository in their basement and liquidate a few underperforming assets to get the old dame back up and running. But, I suspect the poor people of France are about to be tapped on a ‘Gofundme’ page to repair the old girl.

Macron has already pledged to rebuild the cathedral. Not a word now about the appeal to the famous French “laïcité” (French style enforced secularism) that they always trot out when they force a covered woman bather to disrobe on a beach or deny a citizen wearing a scarf or a skullcap participation in an educational institution.

Richard…the ABC are reporting today that Notre Dame is NOT owned by the Catholic Church, but by the government of France. I doubt the Vatican will have anything to do with the restoration.
Perhaps that is why the Australian politicians have agreed to cooperate on a ‘fund-raising campaign’ to assist with the cost involved?

Shuttered shops, open boulangeries, gilets jaunes, anarchists, an arrangement, suspicious quiet … it was all beginning to make sense, or at least seem like a familiar kaleidoscope. Then Notre Dame goes up! End of days, end of month, end of snooze, end of despatch. A recent report about the disrepair of the Palace of Westminster – 40 actual fires put out in a month or some ridiculous thing. Big Ben doesn’t Bong. Who is scripting all of this? You making this up, GR?
But bejaysus, Notre Dame ablaze, phone-cammed from every angle!

The French do know how to protest. Perhaps now Macron will start to realise that it is neo-liberalism that is the source of the great majority of social discontent and that has largely been the cause of the fractious politics that got him elected. It seems even Australian politicians, or at least the ALP, have realised that.

DF
Reply to  Been Around

“The French do know how to protest”.
Allons enfants de la patrie, le jour de gloire est arrivee……. They most certainly do.

Guy failed to mention a few other Paris features: The breast feeding woman (Syrian refugee) on a mattress outside your hotel begging for Euros. Turns out that she and her male friend are Gypsies exploiting the gullible tourist; the dirty rail station Paris Nord where you get on the Eurostar for London. Nowhere to sit and the place infested with scammers posing as survey takers while your pocket is picked. The unkempt road to Charles de Gaulle airport looking like no-one cares for the approach to the City of Light.

And Notre Dame: Security by very black guards from some former glorious French colony who dont even have wands or sniffers; very few native Frenchmen and women at Sunday Mass, the whole service being run by immigrant Catholic clergy clearly showing that religion in France is for immigrants still impressed by the universal church.

France has a sickness in its soul not unlike that prior to WW2. The macaroon running it has no idea what to do. The world is grieving for Notre Dame, in love with the romance of Paris, but its citoyens – that bunch have fallen out of love with the whole sorry circus.

Notre Dame = Reichstag? Nah, nobody is that dumb… surely?

Don’t think so AR….much more like a native French worker chucking a smoldering durry, or a Morrocan bearing a blowtorch or a Senegalese with a grinder.

All these ancient churches with timber framed roofs are huge fire risks unless extensive modern sprinkler systems are installed, and/or foam hose guns similar to those which can blanket aircraft maintenance hangars .

You will find that some well qualified French Architect or Engineer has advised same; but the Owners of Notre Dame did not have the money nor could overcome their genetic smugness in order to get the money and get it done.

Only 13 million tourists a year visit this historic gem, so why spend any money on it?….Pouffe!!!!