There is now a small but lucrative niche on our politics for angry white men to attack women. And One Nation is effectively exploiting it.

The success of One Nation in the NSW upper house — snaring a second seat to send Goulburn ex-policeman Rod Roberts to join Mark Latham, and the likely winning of a second senate spot in Queensland — confirms that Australian politics now provides, at least for the time being, a niche for the exploitation of the resentment of conservative white males. And One Nation is the party that most effectively occupies it.

Pauline Hanson has long benefited from the public funding available through our political system, becoming a millionaire despite not being elected between 1996 and 2016. However, she is now enabling a coterie of, usually, older white males to ride on her coat-tails, even if they regularly fall out with her.

That has enabled long-term political superannuant, Mark Latham, to return to paid employment in NSW while a number of other more obscure figures have also secured high-paying political jobs in the Senate. Malcolm Roberts, the noted peddler of conspiracy theories about Jewish banking families, is well placed to return to the Senate in Queensland, though polling that once indicated One Nation would pick up a quota in its own right in Queensland has given way to single-digit numbers, suggesting it will need preferences to get Roberts back to Canberra.

That the NSW result — which included a strong lower house performance by the Shooters Party — came after Christchurch and the tragic demonstration of the power of right-wing hate speech suggests this political model has some resilience, at least for the time being. How much the revelations of One Nation’s treachery in the United States affects its performance in the federal election will be answered after May 18.

The fuel for the operation of this model starts with the traditional source of support for Hanson and One Nation — a sense of being left behind by the shift of the Australian economy away from manufacturing toward services, driven by globalisation and the removal of protectionism, combined with a part-racist, part-economic resentment of migration.

But the new element is a specific cultural fury of conservative older white men who bitterly resent that they have lost at least a little of the privilege traditionally accorded white males in western societies. Forced to accord women equality (particularly sexual equality), forced to compete with women and people of colour for jobs, forced to share a culture with people of other faiths, appearance and sexual preferences, some white men believe themselves under siege, even though they continue to enjoy systematic privileges that everyone else does not.

The most common expression of this is a persistent misogyny that pervades not merely One Nation but much of the far right. That first found expression in Australia in the right-wing rallies against Julia Gillard, incited and encouraged by the Coalition. But the subtleties of “Bob Brown’s Bitch” and “Ditch the Witch” have long since been eclipsed.

And if you examine the far-right’s tactics, it becomes clear they target female opponents far more than male opponents.

A group of male right-wing senators subjected Greens Senator Sarah-Hanson Young to smears about her personal life in parliament — and only her, not her male colleagues. A right-wing Sky News program ran smears of Hanson-Young by David Leyonhjelm that are now the subject of a defamation action. Mark Latham has attacked many prominent women: Rosie Batty, Lisa Pryor, Kristina Kenneally, Wendy Harmer (let’s not forget calling Janet Albrechtsen a “shanky (sic) ho” back in the day). Peter Dutton was caught out describing journalist Samantha Maiden as a “mad fucking witch”, combining two classic misogynist tropes.

Nor is this historical stuff: the right-wing “Advance Australia” campaign (the mob behind “Captain Getup”) which is run by a senior LNP official on the weekend attacked Tony Abbott’s Warringah opponent Zali Steggall in sexualised terms.

This is no accident. Certainly not for Latham, who sees the world as having undergone an Eden-like fall when “Left Feminism” emerged in the 1970s. Aptly for a man who once penned literate, if rather derivative, tracts on Third Way politics, Latham’s is a coherent and structured sexism.

For others on the far right, it appears an organic outgrowth of their resentment that people like themselves  — white males — are no longer accorded all the privilege that they saw white men receiving when they were growing up.

Women who are deemed to be a threat to that privilege, or who seek power for themselves (and women of colour or Muslim women doubly so), push the buttons of angry white men. Our political system is going to afford such men generous salaries and lucrative perks for the next few years, giving them a platform to articulate their rage. 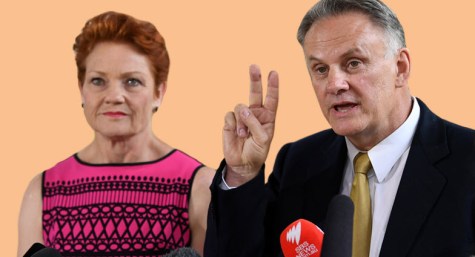 What a sad, sad state we are in where voters see troubled political has beens like Latham, as a reasonable place to park a protest vote against the main stream, bland, self serving party politicians. Six years of being paid to spew his poison at the tax payers cost. Shame.

Reason to get rid of the upper house or at least change the daft electoral system for it.

The Curmudgeon
Reply to  Vasco

I believe it is eight years?

And, agree re electoral system: time to start the discussion about whether proportional representation is any longer fit for purpose.

Abhorrent though these views might be, the fact is that they have some traction in the electorate. I know that some on the left would like to disenfrachise everyone whose opinions they find distasteful, but do we really want to go down the Hobson’s Choice path of the UK where the despicable shambles that is the current Conservative Party are still likely to be reelected because Corbyn – the only alternative – is considered an even less desirable option? Having lived in both countries, give me the Australian system any time – warts (and Latham) and all.

Only one question of substance arises from all of this: which member of the NSW Young Liberals is the twat in the “Captain GetUp!” suit?

But which genius thought the frottage of the poster was a good idea?
Mr Shouty, when an ad man, would probably have thought that a whizz idea.

This article reads like its own grab bag of tired tropes. 70’s feminism was back in… the 70’s. Manufacturing has declined decades ago along with protectionism and women dominated service industries rose similarly.

The penny of political subterfuge drops slowly on most people not just country folk. BK and others here are on stronger ground with the debacles of deregulation, privatizations and dilution of industrial action rights. The looney right happen to be well placed to make hay with this discontent. Rural voters have belatedly woken up to the Nats and city folk to the snake oil of the majors.

The revelations about One Nation seeking NRA funding will have absolutely no impact on the folk who vote for them. First, very few watch the ABC and the few that do, don’t believe it anyway. Secondly, they probably have no scruples about securing foreign funds, or democracy or have any understanding that foreign influence is pernicious. Thirdly they don’t give one about anything other than guns, booze and their distorted view of the world.

I’m just hoping this is the last vestiges of the old white male crowd. We couldn’t have fucked it up worse. What shame I carry for this tired trope. What a disaster we have been.

Say what you will but misogyny lies at the heart of this.