As the country's 900 million voters head to the polls for the first time in five years, what is the current lay of the land when it comes to India's key political parties?

The world’s largest democracy heads to the polls for the first time in five years today in an election that will span five weeks, with pundits tipping India’s Hindu nationalist Prime Minister Narendra Modi will be re-elected very narrowly for a second term.

The historical and geographical context

India first held nationwide elections in 1951-2 after the country gained independence from the United Kingdom in 1947. Now there are 900 million eligible voters which is almost four times as many as the next largest democracy, the United States. In the last election there were 830 million who could vote and 550 million cast a ballot.

India also has 29 states — all of which elect their own governments — as well as seven Union Territories. Two of the Union Territories, Delhi and the southern city of Pondicherry (once a French colony), have partially elected governments, for the other five an administrator or lieutenant-governor is appointed by the president on the advice of parliament.

How does a five-week poll work?

Voting is staggered around the country across seven separate polling days between 11 April and 19 May. Different states vote at different times, with states in the south voting first. On May 23 votes will be counted and and results are generally expected on the same day.

The logistics are mind-blowing with 1 million polling stations and 10 million officials looking after the vote — a key reason for the series of voting days. Polling booths will be open on April 11, April 18, April 23, April 29, May 6, May 12 and May 19 and even some of India’s more populous states will hold phased polls over several different days.

What are the main issues?

Modi won the last election by campaigning on the economy, taking his good record of as governor of the north eastern coastal state of Gujarat and promising to replicate it nationally. 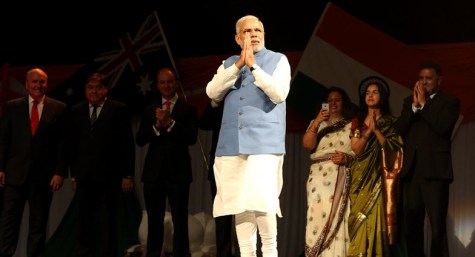 But as his term has progressed, the baser urges of the BJP — and its key backer, Hindu nationalist group Rashtriya Swayamsevak Sangh or RSS — have ramped up religious repression on India’s 200 million Muslims. India is one of the world’s largest Muslim nations in the world — and there are also Christians, Buddhists and other minorities.

Gandhi is countering Modi and the BJP as he tries to resuscitate the once dominant Congress Party with promises of transparency and anti-corruption.

Economically, the country is expected to overtake the UK as the world’s fifth largest economy but unemployment, especially among youth, continues to be major problem — and in recent years, low crop prices have seen farmers become increasingly militant.

What is the winning calculus?

There are 545 seats in the Lok Sabha, the lower house of Indian parliament. Two are filled by representatives of the Anglo-Indian community, the rest are divided into electorates bases on population size — so more populous states such as the northern state of Utter Pradesh where 204 million people live have more representatives than smaller states. Government is formed by the party with the most votes if it retains an outright majority, or by a coalition if not.

The larger parties tend to dominate but there is a tradition of very strong regional parties — some of which can command a substantial number of seats — and that calculus often plays into the mustering of coalitions.

In the 2014 election the BJP won more seats (282) than any party in 30 years and together with partners has held a comfortable majority with 330 seats  — also a historic majority.

What do the polls say?

The Times of India published an analysis of “the poll of polls” and concluded that the NDA would edge home, albeit with a more slender majority.

The polling agencies collated by the paper gave the NDA a minimum of 263 seats and a maximum of 283 seats and Congress’ United Progress Alliance can expect an increased number of seats of between 115 and 149, a significant increase on its 44 seats in the current parliament. Parties outside the main two alliances are forecast to get between 115-160 seats

On a more cohesive note, cricket is arguably more important to many Indians than casting a vote but such is the importance of the annual seven week T20 tournament the Indian Premier League, the world’s richest annual cricket competition, that the BCCI was considering moving this year’s tournament to South Africa for fear of running into any election violence.

So its telling that the final of the IPL on May 12 is scheduled to held in Chennai, deep in the south of the country where the voters have already had their say.

As many eyes will be on the make up of India’s World Cup team to be announced on April 15, as the election result.

Indira Gandhi is not related to Mahatma Gandhi, but is the daughter of Jawaharlal Nehru.