This election campaign, ads will be more of the same

Last week's blokey "back in black" budget video is likely to be a good indication of how the government will approach its mainstream advertising during the campaign — expect more of daggy dad Scott Morrison.

The government may or may not be holding off on calling the election to buy more taxpayer-funded advertising time, but once the campaign starts, we can expect to see more of Scott Morrison playing the role of a daggy dad.

Last week’s blokey “back in black” budget video, posted on the Liberal party’s social media profiles, is likely to be a good indication of how the government will approach its mainstream advertising during the campaign, UTS marketing senior lecturer Dr David Waller told Crikey.

“Part of what he wants to do is rebrand himself and sell himself to a particular type of market,” Waller said. “That video was set to ‘Back in Black’ — it’s trying to be fun and hip but it’s also to appeal to a more middle-aged, family voters.”

And that side of Morrison will be pushed right through the campaign. DDB Australia’s chief creative officer Ben Welsh said political advertising was “inherently emotional”. “We do make incredibly emotional decisions about how to vote, and that’s why the ‘daggy dad’ is not a bad tactic,” he said.

But, he said, the general tone of advertising during election campaigns usually is either an attack or a promise of change. And, he said, you can already see that in some of the messaging: the government has been attacking Labor as untrustworthy. “The Libs have been throwing dirt at Labor, but Labor can offer hope and change, they don’t have to attack the government which makes them look better,” Welsh said.

Waller said to expect to see evidence of Morrison’s love of football and other things that might appeal to family voters during the campaign. The Liberal Party will also be trying to sell the government as the best option for voters who might be considering the proliferation of small conservative parties. “We’re already seeing the messaging around a return to Liberal values,” Waller said. “What they’re trying to do is get some of the people disappointed with the Liberal party back into the fold, they’re not the ‘harbourside mansion’ party anymore.”

Waller and Welsh agreed that traditional media advertising was a platform for parties to communicate their core messages and policies, but parties and interest groups are increasingly using social media as well, as part of their advertising strategies during election campaigns. “Traditional advertising isn’t the strongest form of political advertising,” Waller said. “You can only say so much, so it’s good for agenda setting but when it comes to image, it’s what’s on the news and social media that they’ll want.”

Welsh said that social media allowed advertisers to push a range of messages, and to target those messages. “The actual seats needed to win aren’t that many, and social media is a brilliant way of reaching people in those seats, and you can get very targeted,” he said. “You can throw so many things at it, you can mix it up a bit between their personality, policies, and you can serve up more ads if they’ve shown an interest.”

Social media will also help all parties and interest groups target high-profile electorates and voters who don’t consume traditional media. “In the last election memes were seen to be important, especially for groups like GetUp and the unions using humour to criticise the opposite party,” Waller said. “That can be effective because it’s funny without being too hurtful and can still get a strong message across.” 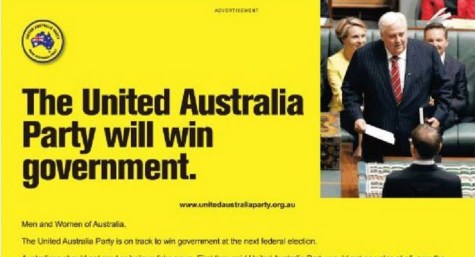 Bluey’s Dad Bandit runs rings around this muppet. So much so that Bill Hayden’s crack about a drover’s dog leading the ALP to victory in 1983 deserves an LNP reprise in 2019. What about it eh Bandit, you’d be a shoe-in.

I keep hearing about these things called advertisements, but I never get to see them. I don’t use Facebook (http://featured.adbusters.org/mindjourney/011/), or any other so-called social media, and I only ever watch or listen to the ABC. I am almost tempted to flick over to a commercial channel just to see what the ads are like. If only they could schedule a program that is worth watching. Except, if they ever did, they would probably cram it so full of ads I would flee back to the ABC in short order.

As shown most days at the end of Crikey with the viewing figures, never underestimate the taste, intelligence and awareness of the bulk of the population.
Look at what the majority of people watch, apparently voluntarily – how does one expect them to understand anything more complex than Bachelorette or MAFS?