Imagine a world with no political advertising

Crikey readers discuss solutions to political advertising and what insolvency firms mean for our economic health.

Yesterday we asked readers for suggestions of what could be done about political advertising in Australia (which Bernard Keane says is as much a scam to benefit political parties’ advertiser mates as anything else). Unsurprisingly, readers had a few ideas. Elsewhere, we received a comment on the issue of insolvency firms, and what they mean for the health of the economy.

Roy Hopkins writes: We already have reams of evidence to prove that political donations warp our democratic processes; and political advertising is no different. By all means let supporters spend their own money in their own name to advertise their support for their political preferences; the voters can sniff the bullshit a mile away. But the current system is rotten to the core: all this black money arrives in the political parties coffers, and then they perform a dance of lies pretending they don’t owe the donor anything.

Mary-Ann Lovejoy writes: Political ads should be banned altogether in my opinion. There should be a set, indexed public-funded budget for parties to set out their policies. Then an independent body must vet it for truth in the costings and measure its effects on the population: for rich, for poor, for women, children, pensioners, unemployed, minimum-wage earners, etc. Both major parties are responsible for the situation being as it is now. Let’s clip their wings, I say.

On Eclipx and insolvency firms

John Winter writes: Despite your unfair reference to those involved in corporate insolvency as “bottom feeders”, considering the essential work they do including in the fight against “phoenixing”, I can tell you it is no surprise to anyone in insolvency that volumes are down in related areas such as auctions. This is the quietest period in insolvency in living memory. It has seen all insolvency firms shrink in size, the number of liquidators reduce by 10% in the last year alone, and some major firms merge. This is all made worse by dodgy, unregulated “pre-insolvency advisers” helping directors illegally strip assets out of their failing businesses and ribbing creditors of any return at all. So, yes, as the canary in the coalmine, we would say the economy continues its rude health. 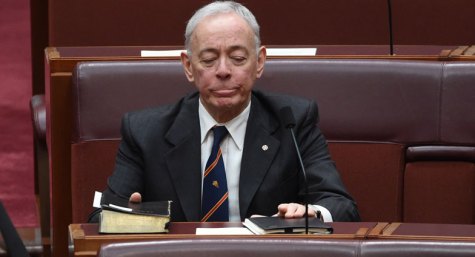 Should Bob Day even be in the Senate?