By stunting the growth of the start up sector we're turning our backs on innovation and setting up the country for issues down the road.

It might have been at the end of 2016, when Malcolm Turnbull’s grandiose innovation agenda — a perhaps well-intentioned but poorly executed spruik for ‘jobs and growth’ — was revealed as largely a fizzer, kickstarting a number of positive initiatives but failing to capture public support for Australia’s tech industry.

Perhaps it was early-2017, with the government’s crackdown on and subsequent removal of the popular 457 visa, an anti-immigration policy sold to voters as a way to promote “Australian jobs” but with the added side-effect of crippling our start-ups’ global competitiveness.

Or was it the gutting of the R&D tax incentive? Introducing a $4 million cap on refunds for companies under $20 million in revenue, and a resulting crackdown on some of the country’s brightest start-ups who had claimed through the scheme, forcing them to repay millions.

It could be our four innovation ministers in three years, with our most recent minister not even featuring “innovation” in her title. Or when the Department of Innovation stripped funding from Australia’s only comprehensive survey of start-ups, declaring the data-gathering exercise didn’t meet its “value for money” principles.

Maybe it was the damaging and “tech-phobic” AA Bill, which weakens security, actively discourages international companies from hiring Aussies, and may cause successful local start-ups to move elsewhere.

Or maybe it was just last week, when Treasurer Josh Frydenberg stood up to deliver his much-lauded budget, which mentioned start-ups precisely once, ignored innovation, and sneaked through a further $1.35 billion cut to the R&D tax incentive.

And in a fitting sonata to the coalition’s shitty symphony, last week new laws were rushed through the Senate to penalise tech companies who host “abhorrent violent material”, a strong response in the wake of last month’s massacre in Christchurch, but, yet again, poorly executed and without consultation.

Atlassian boss Scott Farquhar labelled the bill “flawed” and said it would unnecessarily cost jobs and “damage our tech industry”. The Australian Greens said the bill was rushed, and StartupAus dubbed it “knee-jerk”. 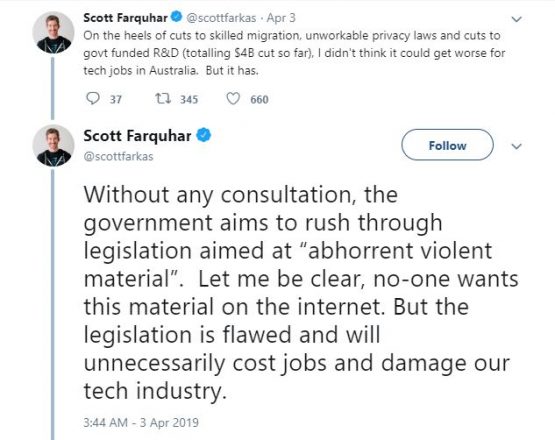 But the bill passed the Senate regardless, with the government and opposition again failing to pay heed to the pleads of a battered industry.

“The coalition government has no vision for what it takes to build an economy of the future and jobs in the future. The reduction in R&D is criminal, especially considering Australia already has such a low R&D spend,” he says.

“All other OECD countries are increasing R&D spend because they’ve worked out it’s a proxy for an innovative economy. And in the face of that, what does Australia do? Reduce it two years in a row.”

Petre says by both “action and by tea leaves”, the coalition rejects all innovation policy and says despite lobbying by himself and other industry advocates, he’s achieved “diddly squat” thanks to the coalition being totally unwilling to listen.

“There’s a strong indication this government doesn’t want anything to do with innovation, science or technology, though every single job in every single industry is going to be impacted by technology,” he says.

“If we don’t have a strong base of innovative companies, Australians will struggle to get jobs, and the standard of living will decline. It’s not just about having a few cool, fun startups.”

As draining as this outlook is, it should come as no surprise for those in the tech industry. It’s been a long time since anyone in the ‘Canberra bubble’ spoke positively about startups and innovation, as Turnbull’s bungled ideas boom clearly showed the issue was far from a vote winner.

And as Australians look down the barrel of an election, expect that rhetoric (or lack of) to continue.

Even Labor, who are currently tipped to win the election come May, are far from the idyllic saviours of startupland some see them as.

Despite staunch supporters in MPs such as Ed Husic, the opposition has twice failed to prevent damaging legislation from passing parliament. The party has shown an aptitude for publicly declaring laws not fit for purpose, but waving them through anyway as to not appear weak on national security.

Read the rest of this piece over at Crikey sister site SmartCompany.

7 thoughts on “Letting down start-ups: how the government has abandoned innovation”