Have out-of-pocket costs for GP visits gone up 25% under the Coalition?

Senator Kristina Keneally was broadly correct in her assertion, but it's important to understand the finer details.

The Coalition has used the 2019 budget to match Labor’s promise to end the Medicare rebate freeze should it win the election.

So, has the cost of seeing GPs and specialists gone up, and is the rebate freeze to blame?

Keneally’s figures broadly check out, but there’s more to the story when it comes to increased out-of-pocket costs.

For a start, the initial 10 months of the rebate freeze was imposed on Labor’s watch.

At any rate, experts told Fact Check the increase could not be solely attributed to the freeze, which has now been lifted for GP consultations.

Rather, they also blamed increased out-of-pocket patient costs on the rising cost of running a GP practice and the way in which general practice medicine was being funded overall.

How does Medicare work in relation to GP and specialist visits?

The Medicare Benefits Schedule (MBS) outlines medical services offered to individuals that are funded either partly or in full by the Australian government as part of Medicare.

Items listed on the MBS, including GP visits, are subsidised on a fee-for-service basis.

According to the Parliamentary Library’s quick guide to Medicare, the government sets a mandated “schedule fee” for each item, and refunds different percentages of this fee depending on the circumstances in which the service is provided.

“In the case of non-referred attendances (those provided by a general practitioner (GP)), the benefit is set at 100 per cent of the schedule fee,” the guide says.

The current schedule fee for a GP visit is $37.60. The schedule fees for specialist attendances range from just over $32 to more than $166.

When a GP accepts the schedule fee as full payment for the service, the patient pays nothing. This is known as “bulk-billing”.

However, GPs may charge more than the schedule fee, with the difference being met by the patient from their own pocket.

This is referred to as an “out-of-pocket” cost.

What is the Medicare rebate freeze?

But in the 2013/14 budget, the then-Labor government announced that these Medicare rebates would instead be indexed at the beginning of each financial year.

This meant the rebate was effectively “frozen” between November 2012 and July 2014, predicted to deliver savings of $664.4 million over four years.

The incoming Coalition government introduced a further freeze in its 2014/15 Budget, pausing rebates at the July 2014 level for two years. GP schedule fees were exempt from this pause.

In the 2017/18 Budget however, the government backtracked partially, subjecting GP services to indexation as of July 2018.

In March, Labor promised to end the MBS rebate freeze for all other services within 50 days of forming government, should it win the May election.

This would mean all schedule fees would be indexed annually from July 1, 2019.

The Morrison government matched Labor’s promise in the 2019-2020 budget.

In an email, a spokeswoman for Kristina Keneally told Fact Check the senator had been referring to NSW figures in her tweet, but that national figures on out-of-pocket costs were consistent with the state picture.

The Department of Health publishes quarterly and annual medicare statistics, which include data on out-of-pocket costs.

The latest annual figures, published in December 2018, show out-of-pocket costs for visits to both GPs and specialists have risen steadily since the early 1990s, where the data series begins.

In her email, the spokeswoman for Keneally pointed to a pre-budget submission published by the Royal Australian College of General Practitioners (RACGP) in which it suggested that, since 2005-06, costs for patients had risen by 140%.

It singled out Medicare rebates as a key reason for the rising cost for patients, though the freeze was only part of the problem; the college also took issue with how indexation was applied.

“The patient rebate has not kept pace with inflation,” its submission reads.

While this was “largely due to the Medicare rebate freeze resulting in a lack of indexation”, it was also because the government used the wage price index as its yardstick for indexation as opposed to consumer price index. 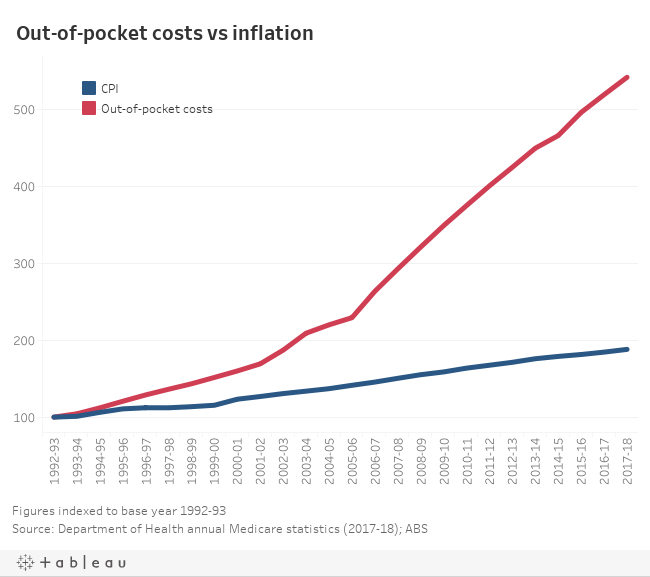 Fact Check asked experts whether Keneally could fairly attribute the rise in out-of-pocket costs solely to the Medicare rebate freeze.

All experts said a number of factors, including the freeze, would have contributed to the higher patient costs.

Margaret Faux, a lawyer specialising in Medicare and health insurance law, told Fact Check the increase in out-of-pocket costs was a “complex issue”.

Ms Faux, who is completing a PhD on Medicare claiming and compliance, pointed to high salaries, expensive equipment and large insurance premiums as structural problems within medicine that could be pushing up prices.

“Yes, [the rebate freeze] is having an impact, definitely, but if it is lifted it still isn’t going to be enough to enable GPs and specialists to run a bulk-billing practice, and practice medicine in the way they would like to practice it,” she said.

“They are still rewarded for six-minute medicine.”

Helen Dickinson, professor of public service research at the University of New South Wales, agreed that rising out-of-pocket costs was a complicated issue reflecting more than just the rebate freeze.

“In 2018, for example, the freeze on GP consults was lifted and was re-indexed by 55 cents, so it’s not a massive amount,” she said.

“It’s probably true to say that the freeze has made the issue worse for some practitioners, but the main thing the RACGP and others are saying is that, actually, the problem is how funding is organised and distributed.”

The RACGP has taken issue with the funding of general practice, stating in its pre-budget submission: “Despite general practice being the most accessed form of healthcare, it represents only 7.4 per cent of total government (including federal and state/territory) health expenditure.

“Successive funding cuts to general practice, including Medicare … has had a devastating impact on health service delivery.”

Other ways of responding to the freeze

Associate Professor Kees Van Gool, of the University of Technology Sydney, said there were a number of ways GP practices could react to the rebate freeze other than by charging patients higher out-of-pocket costs.

“They could try and reduce their practice costs, they could merge with other practices, or they could seek to increase the volume of services they provide.”

This was echoed by the RACGP in its submission.

“Many GPs have forgone income and absorbed the rising cost of providing care in efforts to ensure services remain accessible and affordable to patients.”

This article was originally published at ABC.net.au

6 thoughts on “Have out-of-pocket costs for GP visits gone up 25% under the Coalition?”