Readers spent the weekend wading through the sticky topic of the new laws for publishing “abhorrent” online content (ostensibly to prevent the dissemination of violent footage like that of the Christchurch attacks). As Michael Bradley pointed out last week, the rushed legislation leaves a number of significant gaps and more than a few questions — and readers agreed. Elsewhere, readers farewelled outgoing Labor veteran Doug Cameron.

Mick Donohoe writes: Forget about whether this new law has failed the media, it fails all of us. The article is mainly about the mainstream media, but what about us “civilians”? What about someone who films an attack and uploads it to Facebook or some other website so that the attacker can be identified? What about the people who have filmed unarmed people, mainly young black men, being killed by police officers in America — would they be caught up by this act? What about civil rights organisations which share this footage to raise awareness of the injustice, would they be liable? How many times have we seen footage of terror attacks, filmed by victims and bystanders, broadcast on our mainstream media? If this law becomes the model for similar internationals laws, will this mean that we never see the victim’s point of view again?

On the legacy of Doug Cameron

Robert Henry writes: I absolutely loved him right from the start, not that I always agreed with him, but I loved his character, his verve and the most important fact, he stuck to his guns, even if he was the only one in parliament who held that view. We’ll miss him.

Blayne Pitts writes: What a shame to see one of our best, most sincere, and hard working politicians retire from parliament. A man I would describe has having the highest of principles, incorruptible. A man who stood up for the weak and the disadvantaged in our society. A man who truly understood the social consequences, as well as the economic consequences, of so many of the government’s actions and decisions. I wish we had a whole parliament full of Doug Camerons. Lang may his lum reek!

Geoff Edwards writes: I chatted briefly with Doug Cameron after he delivered a lecture on the proposed US-Australia free trade agreement in 2004. I confidently asserted that the ALP was sure to vote it down, as the deal was so manifestly flawed on theoretical, practical, political, social and cultural grounds. He rightly predicted that instead the ALP would crumble under the influence of the free-trade neoliberals within the labour movement. Nothing much has changed since 2004, as the ALP has recently waved through the Trans Pacific Partnership agreement.  It is not quite true that Doug Cameron was a lone voice. There was and remains a respectable — but heterodox — body of thought within economics that is aware of the defects in the theory of comparative advantage on which free trade enthusiasm is built. These economists are still being ignored just as Doug was ignored, and Australia is still selling its productive assets together with their flow of dividends (and, we now know, taxes) into foreign hands. Of all the issues which energise the disaffected working class and drive them into the arms of reactionary parties, this would have to be the most deeply resented. The neoliberals have a lot to answer for.

Get rid of megaphone diplomacy 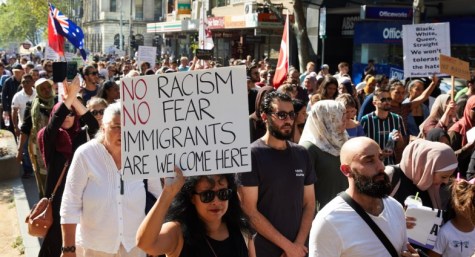 New Zealand can tighten gun laws, but the world must face extremism