Putting it off until later has been an unofficial policy for far too long — delays on climate policy are a threat to our survival.

When it comes to the debacle of the Australian climate and energy policy, over the past three decades there has been one thing that politics and business alike have been willing to commit to: a policy of “predatory delay”. 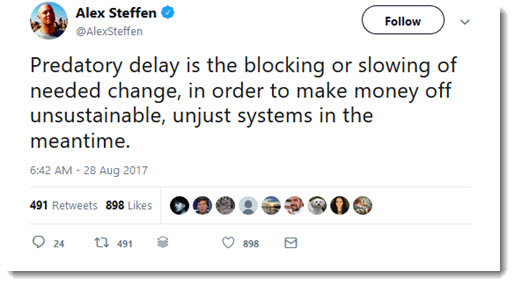 John Howard set the scene for this to happen. Pleading special circumstances because of our high-carbon economy, in 1997 during last-minute negotiations, he insisted on the insertion of the infamous Australia Clause into the Kyoto Protocol, effectively holding the rest of the world to ransom. This allowed our 1990 base to include emissions from an elevated level of land clearing, which he well knew had subsequently dropped off dramatically.

Add to that our allowance to increase emissions by 8% in the first Kyoto commitment period (2008-2012), when almost all other countries’ emission allowances decreased, meant that from 1990 to 2012, Australia’s emission from all sources other than land-clearing increased by 28%, yet we met our Kyoto targets. Our emissions subsequently went down during the short carbon-pricing period to 2014, but thereafter increased, at end 2017 being 31% above 1990. Some reduction.

The Australia Clause was hailed as a negotiating triumph, but it has had disastrous consequences. By delaying the need for Australian companies to take serious climate action, it created the complacency that remains today, gave strength to the denialist lobby and threw away Australia’s opportunity to become a world leader in renewable technologies. With the efflux of time, it will be seen as the greatest strategic mistake Australia ever made.

The impact of predatory delay

There has been a continuing bleat from peak industry bodies, such as the Business Council of Australia, Minerals Council of Australia, and the Australian Petroleum Production and Exploration Association, about the need for policy certainty and consistency — despite the fact that those same organisations too often have willfully undermined achievement of those same objectives. The only certainty has been the consistency of delays. Alex Steffen put it succinctly:

Those in positions of power understand only too well the need to change, but they simply argue for delay, on the basis that to change too quickly would be unfair to them. This allows them to been seen as responsible and caring. They want change, they claim; they just think we need prudent, appropriately paced change, mindful of economic trade-offs and judiciously studied — by which they mean cosmetic change for the foreseeable future. In the meantime, they fight like hell to delay change of any real magnitude, attacking not only the prospects of our kids and kin in the future, but increasingly of our society in the present. Their delay has real, serious human consequences, across generations. They’re taking, not creating; the harm they cause is immeasurable.

Many political, media and corporate players still refuse to accept that human-induced climate change even exists. Meanwhile, climate impact escalates, resulting in lives lost and futures ruined, as recent disasters demonstrate only too well. Far too gradually the Australian incumbency is being forced to act on climate change, as investors and regulators open their eyes to the dangers, and children lose patience with their parents’ irresponsibility.

But the response is complacently reactive, rather than proactive, which is unconscionable when climate change is an immediate existential threat not just to Australian society, but to humanity itself.

Repeating the mistakes of the past

The government now propose to essentially do what Howard did, yet again, by carrying over unused carbon credits from the Kyoto period. Not only is this morally and ethically indefensible in a world that must see emergency emission reduction — but it is economic lunacy, yet again undermining our ability to capture the opportunities offered in transforming to a low-carbon world.

The most egregious example of predatory delay has just occurred in Western Australia. In 2018, the WA Scientific Inquiry into Hydraulic Fracturing found that, if the WA fracking moratorium was lifted, the risks from gas fracking could be contain within reasonable levels, provided stringent operating conditions were met. These included recommendations on the offsetting of greenhouse gas emissions. The moratorium was subsequently lifted.

Some days ago the WA Environmental Protection Agency (EPA) released guidelines under which it would assess greenhouse gas emissions for projects henceforth submitted for environmental approval, in accord with its independent charter. EPA will require estimates of such emissions, along with measures that might be taken to mitigate them, much as foreshadowed in the fracking inquiry, for emissions directly from the project (Scope 1), indirectly for example from purchased energy (Scope 2), but possibly going further to consider the emissions from end-use of the gas (Scope 3), for example in power plants either domestically or overseas. Measures might include offsetting emissions, for example by tree-planting or purchasing carbon credits from other carbon sequestration activities.

The hysterical reaction of the industry and government was wondrous to behold. Massive investment and jobs losses were forecast, majors such as Woodside, Santos, Shell and Chevron professed outrage. BCA chief executive Jennifer Westacott declared the decision reckless, imposing impossible hurdles. WA Premier Mark McGowan insisted that gas should not be disadvantaged as it provides a solution to climate change. Predictably the WA government forced the EPA to withdraw the guidelines for further consultation.

Sheer hypocrisy. The EPA was doing what these players supposedly want — providing certainty in setting out a sensible regulatory framework against which projects would be assessed for the real climate impact they create. Ironically, Shell, Woodside and others supposedly screen their projects against an internal carbon price to allow for the additional costs which are inevitably coming as the damaging externalities of fossil fuel use are finally brought to account, costs such as those implied by the EPA guidelines. But actually paying for the damage created is, it seems, a bridge too far from internal screening.

Other examples abound. Glencore, one of the most vociferous climate deniers, recently announced under investor pressure, that it would cap its thermal coal production “broadly” at present levels. Having substantially boosted production in 2017 by purchasing Rio Tinto’s coal assets, this is little more than a cynical PR ploy to appear climate-friendly whilst delaying the inevitable phase out of coal. Particularly given Glencore’s intent to open new mines as required to maintain production at the capped level.

Seismic shifts on the horizon?

Increasing attention is focused on Australian companies who loudly proclaim their climate credentials, yet actively work to undermine serious climate action by expanding fossil fuel investment, whether they be producers, investors, banks or insurers.

In a global context, oil and gas companies’ capital investment is overwhelmingly concentrated in expanding their fossil fuel operations, with only around 3% annually going to low-carbon alternatives. A significant part of that investment goes to lobbying to prevent serious climate action. Locally, this is evident with Shell/PetroChina’s Surat CSG project, along with the NW Shelf LNG expansion.

Discussion at the recent oil and gas industry annual jamboree in Houston, CERAWeek, for the first time began to consider mechanisms for the oil and gas industry to manage its rapid decline over the next two decades. According to the International Energy Agency, oil demand will drop by 30% and gas will flatline to meet climate constraints — and these are underestimates.

Seems the word has yet to get through to the luminaries of Australian industry. They should pay more attention, because they are going to be faced with far greater change than the WA EPA’s modest, common-sense proposal.

For fossil fuel expansion in Australia and elsewhere is coming to a grinding halt as the world wakes up to the fact that we face a genuine climate emergency, which requires the suspension of politics and business as usual to do whatever it takes to rapidly reduce carbon emissions.

There is no further place for the duplicitous predatory delay which even the more progressive fossil fuel companies remain guilty of today. The industry has no social licence to destroy our civilisation, for that is what they are currently doing. They either proactively cooperate in shaping the emergency transition to a low-carbon world, or rapidly phase themselves out.

Ian Dunlop was formerly an international oil, gas and coal industry executive, chair of the Australian Coal Association and CEO of the Australian Institute of Company Directors. He is co-author of What Lies Beneath: the understatement of existential climate risk, and of the Club of Rome’s Climate Emergency Plan.

Climate change is a result of the greatest market failure that the world has seen, Sir Nicholas Stern, 2006

It is about time that our political representatives actually represented the interests of the population that voted for them rather than the vested interests that contribute to their re-election war chests. I have grandchildren and I need to leave them a world that is at least as habitable as the version that I was raised upon. Sadly, it is now painfully obvious that this train has left the station. However, action needs to be taken now, not at some mythical and ineffective point in the future, to limit or cease further Global Warming. Otherwise, what will we tell our grandchildren? Our kids are already marching in the streets in an attempt to wake our politicians up to the immanent tragedy unfolding around our planet. That the WA Labor Government recently rolled over to the vested interests of the mining lobby and silenced its own (independent) Environmental Protection Agency when it had the temerity to adopt a policy that would require WA miners to offset their greenhouse gas pollution, is a fundamental betrayal of the electorate and of their children and grandchildren

The deniers are in control. The deniers have the money to keep control. As long as this is the case, nothing will change. Except the climate.

The grovelling submission by the WA government to Big Mining was truly shameful. They didn’t even try to argue the point, didn’t even pretend that the EPA had a legitimate argument to make. The Mining Newsletter, otherwise known as the West Australian (allegedly a ‘news’paper) did its best to outdo the faux outrage of Big Mining, and since then its pages have been dominated by big cheerful ads explaining just how fabulous the miners are. Nice pay back.
Bernard writes in another piece today that some countries are effectively just petroleum corporations. Sadly the WA government has been a subsidiary of the big mining companies since the 1890s, as confirmed by this grubby episode.

Yes. And now ‘our’ companies are running amok in Africa and South America. The ‘big’ Australians are the BIG polluters and environment destroyers. A resurgence in the price of iron ore (following two dam collapses in Brazil and many deaths, one of which BHP was involved) is boosting Twiggy and Gina’s balance sheets while in Brazil, BHP’s partner in crime Vale continues to show no concern for the local population or the environment.