The government used the budget to commit to a brave new world of "faster rail" but the money is nowhere to be found.

Will the last person who wants to fund a fast train to Geelong please raise their hand?

If there’s one thing that unites politicians in Victoria, it’s that the overcrowded train line from Melbourne to Geelong needs to be improved to increase capacity and reduce transit times. Last September, the Andrews government declared it was “getting on with delivering fast rail to Geelong, while working to run more trains and making station facilities better for passengers in the region”. (Don’t you love it when politicians use the sullen, pass-ag phrase “getting on with”?).

That didn’t mean it was building anything to do with high-speed rail, just that, in addition to upgrades to improve the line, it was spending $50 million to study the idea of high-speed rail there, along with other fast-rail connections in the state. Then-Liberal opposition leader Matthew Guy had promised a high-speed rail service that would take just 32 minutes between the cities.

It availed him, as they say in the classics, nowt. Among the losses for the Victorian Liberal Party in the state election was its only Geelong seat.

So just under two weeks ago, terrified of the doom coming for Victorian MPs and, in all likelihood, Sarah Henderson in the seat of Corangamite, Scott Morrison announced $2 billion for a “fast train service” between Melbourne and Geelong if the Andrews government matched the commitment. It “would be the first of many the Liberal Nationals Government would build over the next twenty years”. At the time, cities minister Alan Tudge was reported as saying work could begin within 18 months.

You would expect the budget to have fleshed out this commitment. And it kinda, sorta did. Under a cross-portfolio “population package”, Budget Paper no. 2 explains:

The Government will provide $2.1 billion from 2019-20 to ease population pressures in major cities, while ensuring that regions share the benefits of population growth. The funding includes: $2.0 billion from 2021-22 for the delivery of fast rail from Melbourne to Geelong to reduce travel times, increase train patronage and ease congestion on the Princes Highway and West Gate Bridge; $14.5 million from 2019-20 (and $2.5 million per year ongoing) for a National Faster Rail Agency to identify and support the development of fast rail connections between capital cities and key regional centres.

So, not really 18 months at all, as Tudge claimed. What will be established in 18 months is a “National Faster Rail Agency” costing $3.5 million a year, of around 15-20 bureaucrats. Notice they won’t be charged with identifying and supporting the development of high speed rail, just faster rail — which is more likely to be track straightening, duplication and better rollingstock to reduce transit times, not “European-style” high speed trains of the kind promised by Guy.

Quite how that will interact with rail networks controlled by NSW and Victoria isn’t clear, though the Commonwealth controls the interstate routes between South Australian and Brisbane via the Australian Rail Track Corporation. But the budget has a lovely, if rather crude, drawing of the government’s rail ambitions. Former Victorian premier Steve Bracks this week mocked the $2 billion commitment from Morrison, saying “I don’t know who did the costings, I don’t know where the business case is, but I can only assume it was done on a napkin in a cafe … How the Federal Government thinks you can do this for $2 billion, when the section ­between Sunshine and Southern Cross will cost at least four times that amount, is a joke.”

But even assuming the business case is sound, Geelong residents shouldn’t expect anything to happen before the mid-2020s anyway. According to the budget papers, Victoria will receive $135 million in total rail funding in 2021-22 and $280 million in 2022-23. At that rate, the $2 billion commitment will take most of the 2020s to be delivered.

Just when the first fast(er) trains will travel between the cities isn’t clear, but don’t hold your breath.

The crucial six inches that could unclog Victoria’s roads 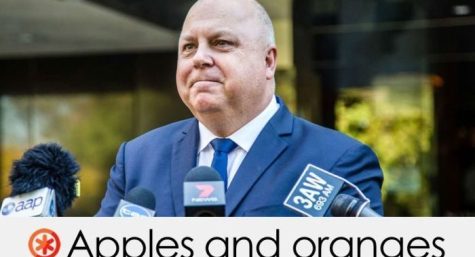 Is Victoria spending more on infrastructure than the entire Commonwealth?

Do they have any idea of the level of noise generated by HST? Have they ever been near the line when one goes past? If so, and I think not (very luxurious riding in side), then how will they insert tracks into built up areas like the Brisbane-Sunshine Coast corridor?

The Geelong-Melbourne journey is probably not far enough for a European style HST.

Regarding the cost of the project, what is the cost of upgrading the roads to cope with increased traffic in the area?

This is all great, but while your planning new metro services in a slightly faster train, freight train services in regions has almost vanished.
It’s a lot more than just direct profitability that should be taken into account, there is the need to reduce heavy vehicle traffic on many poorly maintained regional and rural roads, it does cost lives.

All the grain and other field crops from the Darling Downs are carted to the Port of Brisbane on the Warrego Highway either in B-Doubles or containers. All rail freight stopped after the AWB and the freight division of Queensland Rail were privatised, Grain Corp and Aurizon respectively.

There is a goods rail line from Port Botany wharves but 98% of container traffic goes on trucks.
Which then race the trains to the west of NSW (and further), smashing road surfaces and killing who knows how many people.
Sound economic sense – coz all those medical procedures, funeral services and road repairs boost the GDP – if you are a neolib nutter.

According to rail transport professor John Preston from the University of Southampton, very few city pairs in the world can satisfy the necessary conditions for commercially viable high-speed rail network.

But these fast-rail projects appear to be much more about extending the economic range of property development – being able to travel quickly to regional areas means housing there will suddenly leap in price. Naturally it is driven by a Board full of ex-politicians on high pay using their connections – “the project has established a high-profile advisory board that includes former NSW premier Barry O’Farrell and former Victorian premier Steve Bracks, along with recently retired federal trade Minister Andrew Robb”.

Where is the Infrastructure Australia assessment? There isn’t one. We can be very sure the promoters (said bevy of highly-paid ex-politicians) don’t want one. Reports have in fact been done, but they are much more doubtful about benefits. Again, be aware that this policy is not driven by need, nor by efficiency, nor by results.

It is another stupid political thought-bubble. In 2013 the Gillard Labor government put the cost of a Brisbane to Melbourne via Sydney and Canberra route at an eye-watering $114 billion. Given the equally eye-watering standard of incompetence and shambolic cluelessness set by Border Generalissimo-MP dutton and his department in their visa non-processing, we can expect much higher costs if one is built.

Then we start on the billions in taxpayer subsidies every year to keep it going; although the feasibility study suggested it would not require a subsidy, toll roads have been noted for their unreal (often dishonest) traffic forecasts. As morrison’s only focus of expenditure is tax cuts for his rich mates, it will come from further cuts in services, including regional services.

While I have no argument with R Ambrose Raven’s assessment, in terms of lifestyle the quick trains built in recent years to areas south and north of Perth have brought benefits. People living in Mandurah can commute into the CBD, if they need to, quickly and without stress. These are not “fast” trains but they’re quick, I find that when I’m driving on the freeway alongside the track at 100 km/h they pass me easily, probably moving at about 120 or a little more. That should be fast enough for Geelong and should be feasible without excessively high costs.

Instead of carting sleep deprived workers to and from Geelong why not move the jobs that can be moved to Geelong and surrounds. Spending billions to bring workers to their workplace in the modern era of the NBN seems such a waste. Oh crap that’s right the NBN is hostage to decrepit asbestos ridden Telstra pits that need replacing before we can actuate any change to this crazy situation. Thanks for nothing Mr Abbott and your “cheaper faster NBN”.