According to the ABC, the Coalition aims to bring forward cuts for the roughly 10 million Australians on incomes between $37,000 and $126,000, on top of already-legislated phase one tax cuts for the 4.4 million earning between $48,000 and $90,000 to begin in July. Phase two’s major reform, the increase of the 32.5% tax bracket from $90,000 to $120,000, will remain on track for July 2022. The news follows modelling from ACOSS that found bringing forward the entire phase two package would give high-income earners an extra $104 a week compared to between 50 cents to $4 a week for low-income earners.

HOME AFFAIRS IS BACK, BABY

Leaked confidential documents have revealed that Home Affairs officials took part in evaluating security bids for a new Papua New Guinea detention centre, contrary to department claims that they were not involved in the process and that the contract was a matter solely for the PNG government.

According to The Age, a leaked minute written by the operations manager of Port Moreseby’s new Bomana Immigration Centre, which is funded by Australia, describes officials from Home Affairs, Border Force and consultant KPMG as members of the tender evaluation committee. The news comes after Auditor-General Grant Hehir announced that a probe into the controversial Paladin contracts will be expanded to cover all security and welfare contracts for Manus Island and Nauru detention centres since 2017.

Both the Coalition and the Greens have knocked back federal Labor’s plan to let heavy polluters purchase international carbon permits, while industry bodies announce a range of early impressions..

In what could turn out to be a repeat of Kevin Rudd’s failed 2009 scheme, The Guardian reports that the Greens have slammed international offsets for delaying climate action in Australia while the Coalition has unsurprisingly resurrected the carbon tax scare campaign. Bodies such as the Australian Industry Group and the Australian Food and Grocery Council ($) have offered lukewarm warnings about the potential cost to businesses, while NRMA and the Electric Vehicle Council have welcomed Labor’s electric vehicle policy.

[To actor Jim Carrey] You are a bastard.

The granddaughter of Benito Mussolini responds to Jim Carrey’s political cartoon of the Italian dictator’s 1945 public execution, because that’s just where 2019 is at right now.

Labor’s patchwork climate policy a retreat from past bravery

“There’s no emissions trading scheme here, at least not a meaningful one. Labor proposes to extend the government’s pissweak (to be generous) ‘Safeguard Mechanism’ which purports to threaten a tiny number of companies with absolutely no consequences if they exceed the ridiculously high average industry emission levels. Labor will increase the number of companies affected — from its current number of around 140 — by lowering the emissions threshold at which it applies, but will also allow them to carry over credits for undershooting the industry average, sell those to firms that overshoot, and allow the latter to buy cheap international credits.”

“In Ireland, like it or not, a border makes a lot of difference. On the bridge as we passed, thirty or so people were already forming up, setting up a small stage on the side of the bridge, putting out a strikingly socialist-realist sign — Border Communities Against Brexit, with a Stalin-ishly muscled overalled worker smashing a wall with a hammer — and a few kids painting their faces in EU blue-and-yellow.”

How did the lucky country end up with an energy crisis?

“When it comes to energy, it has been a while since Australia was the lucky country. There have been rolling blackouts in Victoria, warnings of natural gas shortages, extortionate gas and electricity prices; and this has all happened as we swelter through the hottest summer on record.”

Australian Muslims describe how Christchurch has changed their lives

Australia swelters through the warmest March on record

Frydenberg’s big budget moment  in limbo ($) — Troy Bramston (The Australian): “When Josh Frydenberg stands at the despatch box in the House of Representatives tonight, he will be only the third treasurer in the past half-century to announce the delivery of a budget surplus, or a credible path to one, in the next ­financial year.”

A randomised route to better government — Andrew Leigh (The Sydney Morning Herald): “That’s why a Shorten Labor government will establish an evaluator-general in the Treasury, tasked with carrying out high-quality evaluations across government. From taxation to social policy, good evaluation allows us to scale up the most effective programs and close down those that don’t work.”

No other party has taken the hammer to our gun laws like this one — Samantha Lee (The Sydney Morning Herald): “Last Friday the leader of the Shooter, Fishers and Farmers Party, Robert Borsak, headed a press conference seeking to distance his party from One Nation. Borsak claimed his parties’ gun policies are not as extreme as One Nation’s and are more ‘dead centre’.” 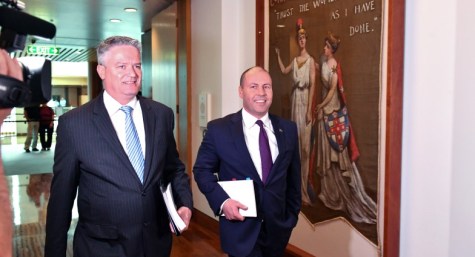