What’s the point of a political grudge match?

Roxane Gay's latest tour with conservative Christina Hoff Sommers was pitched as "meeting of the minds". It shouldn't come as a surprise that it ended in a mess.

Within a movement as broad and complex as feminism, internal fractures are inevitable. Successfully navigating the existence of multiple feminisms is one of the project’s greatest challenges. This was ostensibly the aim of This Is 42’s event #FEMINIST, featuring self-proclaimed “bad feminist” Roxane Gay and “factual feminist” Christina Hoff Sommers. In reality, it turned out a little differently.

I attended the Melbourne event, which moderator Desh Amila prefaced by imploring the audience to be open to hearing from “people we disagree with”. But he really meant person we disagree with: Sommers was reportedly booed and jeered throughout the Sydney event earlier in the week. Her provocative positions on topics like the “myth” of the wage gap and the importance of taking care of men unsurprisingly make her a target of scorn from progressive feminists.

The event was billed as a “meeting of the minds”, but it was clear even before Gay walked out to rapturous applause that this space would not be impartial.

In the context of the debate, the support was thoroughly deserved. Gay consistently presented calm, fiercely intelligent arguments and pitch-perfect responses to questionable assertions. When Sommers tried to insist that there was no audience for women’s basketball, Gay coolly interjected: “I’m sorry but lesbians love the shit out of the WNBA.” Cue hollers of approval.

It was heartening to see so much love for Gay, particularly after her last visit to Australia was marred by disrespectful treatment at the hands of the media. But this positivity was largely eclipsed by the palpable aggression towards Sommers that coursed through the room. She could barely get through a description of a study that found the most effective way to reduce rape on campus was to educate women, so fervent was the audience objection. Elsewhere the anger made way for scoffing or snickering whenever Sommers began a sentence that didn’t align with progressive dogma.

Hostility towards Sommers is not only predictable, but understandable. It’s difficult to hear someone challenge the validity of the gender pay gap. It’s exasperating to see space given, once again, to discussions about what women can do to protect themselves against rape. Sommers is frequently described as a “contrarian feminist” or “provocateur” and, before the Australian events, Gay labelled her a “white supremacist”. Gay said she was not fully aware who she was speaking alongside before the tour, or how the event was being promoted.

As well-intentioned as it may have been, the event’s format encouraged this hostility. The moderator was so quick to move from one broad topic to the next that there was little room for nuanced debate. Often, there was only time for high-level snapshots of the participants’ viewpoints before the discussion was cut short, meaning some topics played out like real-life clickbait headlines. 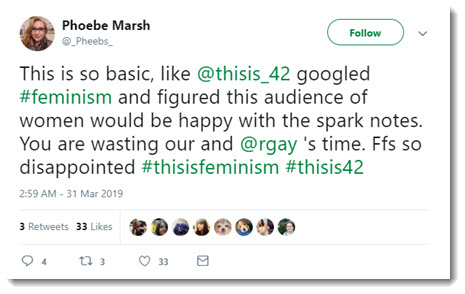 This format is common these days: the media pits two opposing views against one another for spectator sport. A notorious conservative is set up for ridicule while progressive figures act as stand-ins for the audience, validating their existing beliefs. Gay’s recent appearance on Q&A opposite Liberal Party vice president Teena McQueen epitomises the trend: McQueen was so fantastically clueless that her own party disowned her after the episode aired.

Presenting opposing viewpoints as fodder for ridicule demonstrates what Jeff Sparrow terms “smug politics”, whereby the left inadvertently reaffirms their reputation as liberal elitists, further alienating conservatives and empowering the right. By laughing at Sommers and attempting to silence her, the audience on Sunday sent a clear message to those whose views in any way align with hers: you are not welcome here.

While it’s tempting to believe that Sommers represents an irrelevant minority, this simply isn’t the case. Her viewpoints reflect a very real disillusionment with the broader feminist project. One only has to look at the rabid infighting on social media that surrounds anything related to feminism or, indeed, the popularity of Sommers herself, to see that many women feel alienated. Some women do have questions or concerns about the impacts of feminism on men, or the biological specifics of transgender women in sport, or the moral dilemma of abortion. These women exist.

Taken in isolation, it’s hard to imagine anyone who listened to Gay’s arguments on Sunday night not agreeing with 95% of them. She was that good. But for Sommers’ supporters, this was surely negated by the disdain they faced from Gay’s fans. The energy in the room bordered on hatred for Sommers. It left me feeling despondent about the future: how can feminism progress if this is the standard for discourse?

To deal with uncomfortable and potentially dangerous ideas at their surface level, and then cast them away with ridicule, only pushes such women further and further into the opposing corner.

What would a better debate look like? Let us know what you think: [email protected].

Greta Parry is a Melbourne-based writer. She is former editor of Screen Education and a current subeditor of Archer.

I have a query for those who think women should not consider being aware of the possibility of sexual assault in some situations. Yes you have the right to walk and go as you please, but when I was a young bloke 1.8 metres tall 110kg, doing heavy weight lifting in my job there were some places I would not willingly go. Do you walk into a war zone unprepared? Like many men my age who was brought up to respect women by men who respected them, I am horrified by the depiction of women in demeaning roles and the misogynist trash in our parliaments. But I worry about men losing any notion of being good at anything, about primary school boys who never meet a male teacher and the fact that instead of feminism encouraging men to improve their thinking, it trash talks them and encourages women to do every idiot thing that men do. Finally, if you wear an outfit that is clearly chosen to provoke attention, are you entitled to be cross when people stare. I have met women who were offended if you didn’t take notice and then offended when you took too much.

Jonathan
Reply to  old greybearded one

“Do you walk into a war zone unprepared?”

It’s not flattering to our young men, but experience has taught me you are absolutely correct with this analogy.

Thank you Greta. To a Maslowesque witch-hunt, lynch-mob mentality some things just are intolerable.

I suppose the real question is at what point do you draw a line. Do white supremacists and their supporters deserve respect and tolerance in a debate on racism? Do climate change denialists and their supporters deserve tolerance and respect in a debate on the future of the planet. I wasn’t at the debate but I question how much respect should be given to people who argue that the wage gap is a myth. i think that there is a difference between ‘uncomfortable and potentially dangerous ideas’ and reactionary lies. It could be argued that the strength of the climate change denialists is that they weren’t treated as fools and ridiculed whenever they sprouted their dangerous delusions.

People who pay to attend two diametrically opposed speakers are there to confirm their moral/political credentials amongst like minded peers.
Don’t expect too much from a modern day Punch & Judy show, the crowd is there to boo the baddies and cheer to goodies.
Stupidity, ignorance and the desire to be told what to think, how to belong; is not the province of any era in time.

Setting up the emotion based interview punch up is the stock in trade of commercial tv as is lovingly explained and lampooned in the classic ABC series Frontline.

If only the gender pay gap was a clear cut issue…. but it’s complicated. Refusal to acknowledge this on both sides is indicative of the worsening problem of playing the (wo)man not the ball and the desire to be barrackers rather than thinkers.

Interesting article but irrelevant to most people. Fortunately.