The hour after the failed vote was a thing to behold, as the House of Commons tried to work out what to do next, on the floor, in real time.

The UK is back on the edge of crisis, as all options for action on Brexit have once again been rejected by the House of Commons.

In another paper ballot, “indicative” vote, all four options selected by the Speaker to go forward were rejected.

They were all, as was noted by the right, “Remain” or soft Brexit options: Tory Ken Clarke’s “permanent customs union”, Tory Nick Boles’ “Common Market 2.0” (customs union + single market), a cross-party push for a “confirmatory” second referendum, and a delay of triggering the Article 50 withdrawal.

The votes remained largely party political. With the cabinet abstaining, the bulk of the Tories — save for a small pro-EU group — voted against all four. Labour was whipped to support a permanent customs union, and largely came behind the other three. The Scottish National Party, insistent on a second referendum, abstained from the customs union, which killed it, and of course the Democratic Unionist Party (DUP) voted against everything.

The hour after the vote was a thing to behold, as the House of Commons, the so-called “mother of parliaments” (it’s not), tried to work out what to do next, on the floor, in real time.

It was proposed that by combining the second referendum proposal with customs union that a majority might be sought; Ken Clarke argued this would drive away votes from getting the customs union over the line.

Nick Boles, mover of Common Market 2.0, stood up, and on the verge of tears, announced that he had spent months trying to create a deal that would honour the referendum result. He said he had tried to gain a majority but that he had failed because of his own party and therefore he was quitting. Then he literally crossed the floor to the cross-benches as dismayed colleagues were heard to say “oh Nick, come on, don’t”.

During the day, a naked group of protesters calling themselves “Extinction Rebellion” tried to superglue their butts to the perspex barrier at the front of the public gallery. It’s a measure of where we’re at that this wasn’t the most interesting thing that happened in the UK parliament today.

So what happens now? Tomorrow, Theresa May — the PM, sitting through the aftermath tonight, like a bystander — has an inner cabinet and a full cabinet meeting to see if there is any chance of presenting her truncated withdrawal bill for a fourth time.

Most likely, the “government”, if such an entity still exists, was presuming that one or both of the “customs union”, and “second confirmatory referendum” votes would get up. The prospect of an endlessly deferred or even cancelled withdrawal, would scare the 30 Tory Brexit hold-outs (now known as the “Spartans”) back to May’s withdrawal agreement.

The DUP would always reject it, but 25-30 Tories, plus another five Labour votes (to add to the five who voted for May’s deal), would be enough to narrowly reverse last week’s 58 vote loss.

May’s cabinet itself teeters on the verge of collapse. The no-dealers within it would quit if May tried to further soften the withdrawal; if she plumps for a no-deal, another half-dozen Remainers would go.

The most bizarre things are now being spoken of, such as May wielding the nuclear option of an election by deliberately losing a confidence vote, kicking off a process to a general election.

What the Commons votes on on Wednesday now depends on Tory free-agent Oliver Letwin, who kicked off the whole takeover business, and has control of several hours of debate time; and the speaker of course, the office having regained an authority it lost more than a century ago.

And the conditions for an April 12 crash-out have been met; no alternative plan. That is now 11 days away.

No, 10. Midnight just ticked over in the UK.

Guy Rundle is reporting from London this week on the Brexit chaos. Read more of his coverage here. 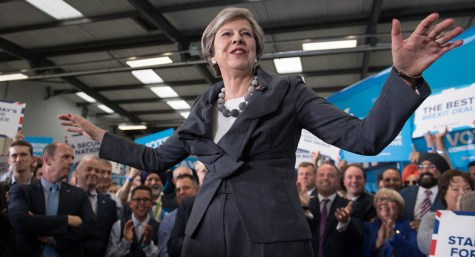 I tell you what has been on my mind re Brexit in recent months, is that this is Murdoch’s payback to the UK following the News of the World scandal / fallout, him being denied his Sky takeover, flavoured with a bit of antipodean class envy. It’s quite amazing how the UK have fallen for it and are totally complicit in their own demise.

Throw in Putin’s hate of the EU and Cambridge Analytica’s paid assistance ,along with holding a referendum without requiring a majority of the population to vote…. Only the POM”S could do this and keep a straight face.

Guy, as entertaining as these articles are, I still have no idea what you’re doing there. I see no decisions that your reports might inform, and of the broader questions we might ask about modern democracy, I’m unclear so far which are served by you reporting first-hand. (I acknowledge that you’re capable of producing them and realise you might still be working on them, but I’ve yet to see them is all.)

Meanwhile, to my untutored eye it seems that the UK Parliament can use its broken, populist media to rule however it wants, but not to govern a democracy effectively. That’s a lesson we seem to be finding in Australia too, with its paralyses over energy policy, climate change and humane border control for example.

Post-factual journotainment seems great at distracting with theatre, jerking knees with visceral fears and crippling polities with divisiveness, yet incapable of providing analysis with enough clarity and insight to produce an effective, actionable strategic result.

So in that regard, do you view your Brexit reports as part of the solution, or just cashing in on the problem?

Surely this is exactly what those of us who pay Crikey subscriptions largely for Guy’s contributions want from him Ruv? Particularly for those of us not as across the fundamental issues as yourself. Lord knows we don’t need another angle on the One Nation shit show or the Budget right now.

Isaac wrote: energy is a life essential in a modern economy and are way too important to be left to the market.

If you’re talking about entertainment, Isaac, we’re certainly getting that. Guy entertains well enough not to need to do journalism too unless he wants to. I certainly can’t tell you what sort of entertainment to want, nor Guy what career to pursue — and he can certainly do more than one thing in an article.

However journalism has to do more than amuse a curious public: it has to serve the public interest, and that’s something we can talk about collectively.

So what’s the public interest?

My take is that any information or analysis that helps us cooperate more efficiently, effectively and equitably serves the public interest.

Guy certainly has written such pieces before, on topics as diverse as betting ads on the Sydney Opera House and bike paths on old Tasmanian railway lines.

I’m just wondering: will the public interest be served this time? There’s plenty of free, detailed and current Brexit reporting coming from (for example) the BBC, The Guardian, the ABC and free to air commercial broadcasters both in Australia and abroad. If you’re interested in this stuff, it’s easy to overwhelm yourself in it and there’s no end of experts purporting to help us interpret it.

His admittedly considerable entertainment value aside, what significant decisions is Guy helping me to make here, and how is his information adding to my actionable insight?

Or is subtracting journalism while adding exotic entertainment the way we want to support our ailing democracies?

(Isaac, sorry for misquoting you. I meant to quote: Surely this is exactly what those of us who pay Crikey subscriptions largely for Guy’s contributions want from him Ruv? A cut and paste fail imported someone else’s quote from a completely different context and I didn’t reread before posting. Wah!)

It happens to the best of us, don’t worry!

Thanks for taking the time to reply, and I certainly can’t disagree with anything you have said. I think you are less cynical about the role and influence of these mainstream outlets than I am. I was for a long time reliant on ABC/Fairfax/Guardian/NYT et al. for news but increasingly look to alternative sources (yes, one of those people, sorry) for anything other than a basic outline of the recent developments of an issue. It is by wading through these other sources, which while time-consuming and disorientating is I think increasingly necessary, that I can come to some sort of actionable position.

Crikey, but more and more mainly Guy (especially with the absence of Helen and the deterioration of Bernard), provide this basic role but also with a touch more variability and independence — and, yes certainly, entertainment. In Guy’s case, also a rareness in humility, whose absence in media generally is striking and lamentable, and the occasional moment of genuine transcendence.

As an aside, thanks for consistently raising the tone and level of depth of discourse on these boards!

The UK has achieved gender equality – Two Neville Chamberlains in one century.

The ‘Darling Duds of May’ is soon approaching.

Where is an Alexander when you need one to cut the Gordion Knot – of Brexit .

What is it about UK politicians? Can they not see that what has got them into this mess is the stupid system the use to determine important questions such as remain or leave the EU. The leave vote was only supported by under 40 percent of eligible voters. Surely such important decisions should require over 50 percent of eligible voters.? I am afraid the mother of all parliaments is past it’s use by date and requires major reforms based on common sense and dare I say intelligence.

The vote (non binding, junk mail opinion poll fudge) in favour of SSM was 48.4% of the electorate.
The Brexit poll was the highest turnout – over 72% – for a British election in a century, 60% is the norm.
The main obstacle to democracy in the UK is FptP – the euroid election of MEPs on tuther hand is proportional presentation
Which the Poms rejected, along with transferable preference, in 2011 so basically, they’re screwed – hanging on to Nurse, for fear of something worse.

The turnout for the UK referendum was actually 40% of those registered to vote in the UK.
52% of the 40% of people who voted, voted to leave.
By my calculation that means Brexit is based upon 23% of the entire population eligible to vote.
Who in their right mind takes a non binding vote and proceeds to disrupt its economy, alienate its allies, endangers the good Friday peace accord in Ireland and puts at risk enormous numbers of jobs in places like the financial sector, on this basis?
I do understand the frustration felt by the negotiators from the EU.

Ratty – you are plain wrong. It is an acknowledged fact, even by remainiacs, that the turn-out was over 70%, the highest in living memory.
Vote Leave won 51.9% of votes in the EU referendum, with a standard deviation of 10.4% across UK local authority areas. A total of 46.5 million voters were registered, and 72.2% of these turned out.
https://www.bbc.com/news/politics/eu_referendum/results