There is Brexit anger in the Irish borderlands, where protesting locals remember what a hard border really looks like.

“Dywanna get off at Belcoo or Blacklion?” the Eireann bus driver said as we slowed through green fields becoming little knots an cul-de-sacs of bungalows.

Good choice. Belcoo’s a small town on the border of Northern Ireland and the Irish Republic. Over a bridge and the border was Blacklion, an even smaller town in the Irish Republic. The two places were never one town, but until 1922, they were in one state. Belcoo, as we went through it, looked like your typical Englishified Northern Irish town; the shops schmicked up, the pub ghastly. Blacklion was one main street of old shops and three bars for a population of 150.

As the bus slowed to a stop for two minutes, I knew I’d made the right choice. An ancient general store, heaving with thousands of goods; a clothing and haberdashery store, J. Johnson, with its suits and bolts of cloth neatly displayed in the window; and Maguires Pub beside it, with a 1920s Guinness ad occupying the whole single storefront.

Inside, a blessed dark old wooden bar. Bevelled mirror ads for old whiskies hanging round the walls, dim light in old gas lamp glasses, a sheaf of yellowing IOUs on a pinboard behind the bar, the fire on in the grate and the football on one discreet screen in the corner.

In Ireland, like it or not, a border makes a lot of difference. On the bridge as we passed, thirty or so people were already forming up, setting up a small stage on the side of the bridge, putting out a strikingly socialist-realist sign — Border Communities Against Brexit, with a Stalin-ishly muscled overalled worker smashing a wall with a hammer — and a few kids painting their faces in EU blue-and-yellow.

I got in a Guinness to get oiled up for the protest, and to commit that entirely unnatural practice of journalism: asking people embedded in the struggles of their lives and world to define themselves in three minutes. The usual deep reluctance kicked in. I wanted to sink into a seat at Maguires forever and let my mind dissolve into it all, like the beige foam rising through the black in the glass in front of me.

This was Saturday. The day before, in London, Theresa May had taken her stripped-down withdrawal bill to defeat for a third time, as a pro-Leave crowd had ebbed and flowed around Parliament. Their carnivalesque style with union flag capes and UKIP straw-boaters, stuffed lions and toy unicorns, had a sinister edge. This was exemplified by the breakaway rally put on by UKIP (now a far-right fringe party), which featured the more-or-less fascist Tommy Robinson, lording over the crowd on a jumbotron screen.

I’m all for a bit of political theatre and costume, but there was a nasty, resentful edge to all of this, a harbinger of something uglier to come.

Thinking about this in Maguires, the Guinness down to suds with another one waiting, Paul Anthony — “hello Paul Anthony!”, the bartender had said — slid in the seat beside me. He was in his sixties, trim and strong, double denim, and a face as pockmarked and porous as the border we were sitting in.

“Yes, what do you think about Brexit?”

“NO POLITICS!” the bartender barked.

“Ha, I’m just messing witcha,” the bartender said. “Say what ya bloody like.”

“Ah man it’s mad,” said Paul Anthony, in an accent so stout-dark I wont even try and reproduce it.

“Do you think they’ll put a hard border back in?”

“Won’t make any difference, they’ll drive through it.”

And at that, just for a second, Maguires went quiet.

Down at the protest half an hour later, there was a slightly more optimistic mood, even if there were four armed, bullet-vested cops at either end of the bridge. Euro-star face paint, fake troops — teens in camouflage — for a fake border. People in trackie-dacks and spiky haircuts, families wheeling kids in strollers taped together at the joints. At the border, the border is not an abstract question.

“We know the effect this will have on our communities, our families, our young,” a speaker said from the podium, his words carried into the rolling green through a portable karaoke-machine boombox. “Cross-border schooling. The medical system. The return of inspections. What we have worked for, for twenty years, to live in peace, could unravel.”

Carl, a local doctor gave a detailed account of how the whole cross-border medical system — from blood tests to prescriptions and home nursing — would fall apart if a border were reimposed. “We need common sense!” he yelled to big applause.

“We need Sinn Fein to take their seats in Westminster and speak for us, not stick to a century-old abstentionist policy,” he yelled, to rather less enthusiasm.

Rita, his wife — “she’s German” he said — shouted, “We don’t need idealists in politics, we need realists! If idealism, let’s have John Lennon idealism… imagine no religion.” This got very little support at all.

The situation is perverse of course. Northern Ireland voted 66% to remain, one of the highest remain votes in the country. Yet because Sinn Fein do not take their seats — where the Social Democratic and Labour Party (SDLP) whom they replaced, used to — the only voice for the North is the Democratic Unionist Party (DUP), who would be happy to leave with no deal.

After the speeches, the enactment of a border inspection, with a truck coming up the bridge and being bailed up by various faux-uniformed people. The police of the two nations, loaded with arms, watched on from either end of the bridge. These things are usually hokey, but this is Ireland, so it quickly became like something from late George Bernard Shaw.

“D’you have any meat?” yelled the fake cop.

“Ah I’ve got all the meat y’ want” the driver yelled.

“D’you know what the EU regulations are on meat?”

And so on, as the traffic backed up, and even the cops had a laugh until eventually the fake quasi-military had to be dispersed by the real quasi-military. All good fun, but the people I spoke to had a certain disquiet. In the past there were a handful of killings in Belcoo, mainly IRA snipers shooting Ulster paramilitaries. The Ulster Volunteer Force car-bombed Blacklion in the 1970s. The old railway bridge was blown up by the British Army so the Provos couldn’t use it.

Sean and Jacqueline, two of the face-painted, lived in Northern Irelard, but were students at Institute of Technology Sligo in the Republic.

“I’m not really interested in the united Ireland question,” Sean said “Unless it can happen with peace. Peace is what matters. I identify with my English family, with my Irish family.”

It was impossible not to hear the catch of worry in his voice, or not to share quiet anger: that for the sake of a souvenir tat march in London and cynical Tory ambition, the real achievement of the Good Friday Agreement is about to be stress-tested for absolutely no purpose whatsoever.

Back in Blacklion, one more Guinness. Paul Anthony was still in Maguires Pub.

“Everyone calls me silver,” He said. “Silver ‘cos I had the money.”

“It’s a big basket you strap on the donkey.”

“And this would start again?”

Five hours later, after a bus and a train, I came into Dublin. I was still thinking about what he said. London tomorrow, and the whole game begins again. 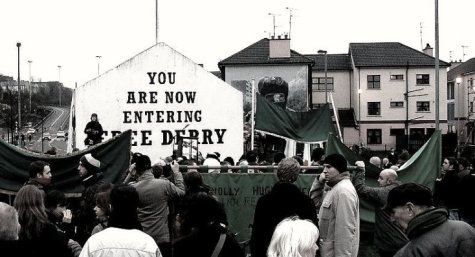 You said “This was exemplified by the breakaway rally put on by UKIP (now a far-right fringe party), …”

When were they anything else???

Thanks Guy. One of my grandfathers was born in undivided northern Ireland. I’ve never been there but I’ve seen photos of some family gravestones. I hope the pointless Brexile exercise doesn’t give rise to a whole lot more gravestones.

Thanks Guy – going to Ireland in mid-May for a couple of weeks.

I wonder if the whole place will be in a boiling mess by then?

I see no feasible way that Brexit can happen without a customs border between Ireland and Northern Ireland, as well as a wide-ranging ranging treaty between the two countries on things like free movement, access to services etc.

They might face up to finally working out all the crap that being membership of the EU allowed papered over.

I’m amazed they haven’t worked out by now that partition is rarely the easy option it looked like at the time.