The government is facing a growing resistance from Djab Wurrung traditional owners over the destruction of cultural heritage. Is this a litmus test for what's to come with treaty negotiations?

Those who have advocated for better outcomes for Aboriginal people have long known nothing is achieved without litigation or agitation.

For the past 10 months, the Djab Wurrung people have known this all too well. They have stood guard over their traditional lands in a bid to prevent the destruction of hundreds of sacred trees under threat from the Victorian government’s $672 million Western Highway duplication project.

Over the weekend, more than 70 Djab Wurrung traditional owners met onsite to reaffirm their commitment to prevent the highway extension to Beaufort and Ararat in Victoria’s west. Some of the trees are estimated to be more than 800 years old, including modified birthing trees that have seen generations of Djab Wurrung people born. Traditional owners want Victorians to celebrate their significance.

“These trees aren’t just ours, they don’t just belong to us, they belong to all Victorians,” spokesperson and Djab Wurrung traditional owner Meriki Onus tells Crikey. “This is everyone’s cultural heritage.”

There has been limited coverage of the blockade in mainstream media. Despite the lack of attention, 150 people last week joined senior Djab Wurrung traditional owners after a tip-off indicating VicRoads were just about to commence works.

Senior traditional owner Sandra Onus is grateful for the support: “We’ve been overwhelmed by the community response. If the Andrews government wants a fight to destroy our cultural heritage instead of negotiating an outcome, they’ve got one.”

The fight is on

What started out as a grassroots campaign this week has received a significant boost. On Monday the Djab Wurrung were given support by the Victorian Trades Hall Council, which could potentially disrupt works on the highway’s duplication. In a motion passed on Friday, the Council stated:

The Victorian Trades Hall Council (VTHC) stands with the Djab Wurrung community in their campaign to stop the removal and destruction of important sacred trees threatened by VicRoads planned Western Highway extension.

We acknowledge their staunch and ongoing resistance to this attack on their identity and culture. We call on VicRoads and the government to work with their community to urgently resolve this issue and stand ready to take solidarity action if this fails to occur.

Trades Hall support for the traditional owners has upped the ante in a campaign that is generating its own momentum.

Minister for Transport Infrastructure Jacinta Allan has indicated the project will proceed and plans have already been modified after community consultations, to save eight trees including two birthing trees.

“The way our concerns, elders and cultural values are being dismissed by the Andrews government gives us no confidence they are undertaking the current treaty negotiations with traditional owners in good faith,” she says. “The protection of high cultural and natural values must be part of any treaty process, not destroyed while the treaty process is underway.”

Traditional owners are committed to stay onsite until they have a commitment from the government to have a negotiated outcome.

A road to treaty?

With Victoria in the midst of developing a framework for the negotiation of a treaty, the Ararat standoff is a litmus test for the way real world negotiations will take place.

Despite the mounting pressure and a court ordered injunction to prevent any works occurring over the next 48 hours, protesters are still unclear as to the intentions of the government. Onus says the protesters are still in the dark: “I don’t know what they’re trying to do, they trust their systems but there are huge flaws in how the Heritage Act is enacted. People in government have our number. They know how to contact us. We are willing to talk.” 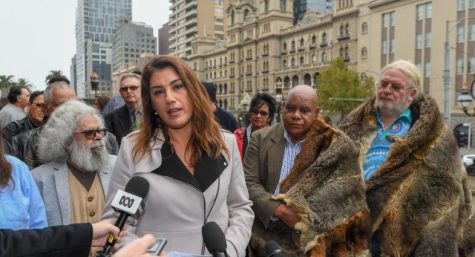 Can Daniel Andrews maintain good faith through the treaty process?

“In a time of slow awakening to the true history of Australia, it is troubling the self-proclaimed ‘most progressive government in Australia’ is paying lip service to traditional owners, people dedicated to protecting this state’s rich cultural history,” she says.

It’s a sign of how difficult it still is for Aboriginal Victorians to engage in a meaningful and equal dialogue with government, as Onus knows all too well.

“It’s never easy, there are a lot people involved in this action. We come from all walks of life, we aren’t just one homogeneous group, it’s hard to coordinate. We have lives to lead, jobs to hold down, we aren’t professional protesters.” 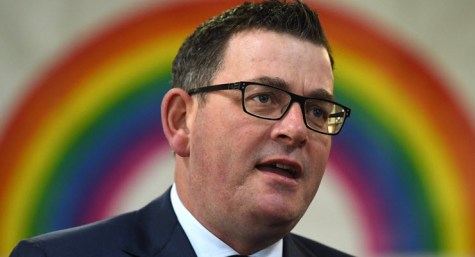 The Victorian government is a bulldozer painted like a rainbow 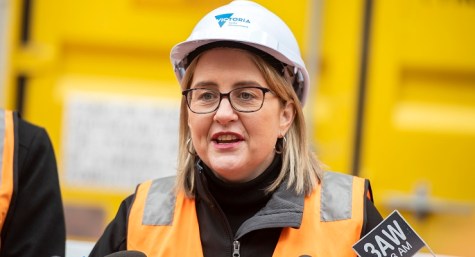 Djab Wurrung people have been failed and betrayed at every turn 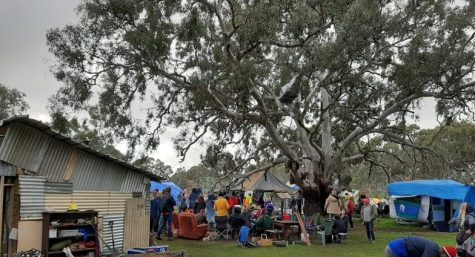 A road through the middle of St. Paddy’s cathedral would never be contemplated, nor even a tramway through the War Memorial, so why the indifference to this sacriledge?

These trees need to be protected. How could Vic Roads even consider removing them? The new highway can follow the existing section of highway and cost less than this current plan. I hope reason will prevail, and the Djab Warring peoples’ wishes will be respected. A treaty will be an empty pice of paper if the rights of Aboriginal people are not respected, and people are not listened to.

Agree with you that these trees need protection. I’m not sure if you’ve been up there, but one of the birthing trees is actually only a few metres (perhaps 20? sorry, that’s me guessing distance by eye) from the existing road. The trees are incredibly powerful. I’ve met them (and yes, met is the right word – I’m not a new ager or anything, but the power and significance of these trees is palpable and deeply moving).

Yes. Met is the right word!! These old trees are powerful, and should be respected. they have watched over this country for a long time now. To think that they could be bulldozed is very sad. I have donated to help the fight to save these trees. I hope more people do the same.

Lip service is right. We keep talking up about national healing with the Aboriginal and Torres Strait Islander people in Australia, yet here we are literally destroying their ongoing heritage to build a road.

The thing is, there’s precedent for actually listening to local community wishes. In the 90s the Irish Government changed a motorways path so it wouldn’t destroy a fairy bush because funnily enough, cultural heritage is better for the national soul than more roads.

Though I suspect this will end up as another loss for our Indigenous community. I think Dan Andrew’s could be a perfect Mr Prosser telling Arthur Dent that “you’ve gotta build bypasses”.

As someone pointed out about Stonehenge, it was a pity to put it so close to a major road.

It is good that this story is getting some traction. It is a small conflict, but an important one. Most governments bleat righteously about their environmental credentials, but whenever the environment gets inconvenient you can tell that the bulldozers are coming from the amount of bullshit that precedes them.