Why the democracy sausage is a uniquely Australian experience

When it comes to voting in Australia, this delicious national pastime is certainly not the wurst.

A little known highlight of the NSW election was the beginning of a “thing”. Ryde teenager Cameron Last set out to create an Australian record of eating a “democracy sausage” in 18 different polling places in his electorate. He only made it to 10 but that record now stands until, inevitably, it gets broken in May at the Federal Election.

Enthusiasts have created a “crowd sauced” website where you can check out what’s on offer at polling booths near you.

We all know what “democracy sausage” means. In fact it was the 2016 Australian Word of the Year. It is our code word for the whole process of voting in a safe and democratic society.

It means a hot Saturday morning in the local school playground with bunting and balloons, and parents with strollers and dogs on leads. It evokes a semi-festive atmosphere where cake stalls jostle for position with sunburnt party volunteers handing out how-to-vote cards.

But few Australians realise that the democracy sausage is a uniquely Australian event. I didn’t realise this properly until I was campaigning in the US during 2008. In the US, voting day itself is a grim and joyless affair. At our booth there were few placards and no bunting of any sort. There was no one handing out how-to-votes and there was not a sausage in sight. Voters straggled in during the day and dashed off as soon as they had managed to vote. It was not colourful or exciting at all.

Why is this so?

There are four features of the Australian electoral system which makes election day in Australia so different to the rest of the world.

We are one of only nine democracies that have compulsory voting. This means that a fair percentage of our citizens (estimated as high as 10%) who rock up to the polls still have not made up their minds so last minute persuasion or a compelling slogan could make the difference. This is why there are so many party volunteers swarming around ready to change the election result with their final effort. In non-compulsory voting countries, only voters who have already made up their mind arrive at the polling booth.

Also, preferential voting means that the provision of how-to-vote cards is necessary. Preferential voting is not always understood (particularly for NSW voters which offers optional preferential voting) and the struggle to make sure that no voter enters the booth without your party’s card is crucial. Most comparable democracies have simple first-past-the-post systems which need no explanatory cards about where to place your preferences.

Unlike the US and Britain we have elections on a Saturday which means that citizens pop in before going to the supermarket or bring the whole family along with them after Saturday sport. In the US and Britain, the fact that citizens have to vote on a working day means that workers are harassed and anxious about the fact that they will be late back to work.

Polling places in Australia are often primary schools or church halls where local P&Cs and parents’ groups leap upon the chance to have captive customers for their sausages-in-white bread and bright pink cup cakes.

In Britain the polling booth is typically the rather formal town hall and in the US, voter suppression is so commonplace and queues so long that the idea of lashing out on a sanger sandwich is unthinkable. So next time you stop for a democracy sausage on election day, recognise that you are taking part in a uniquely Australian experience and a celebration of what democracy should be.

Dr Meredith Burgmann is a former Academic and Labor President of the NSW Legislative Council. She has campaigned in the US and Great Britain.

Got thoughts about democracy sausages? Let us know at boss@crikey.com.au 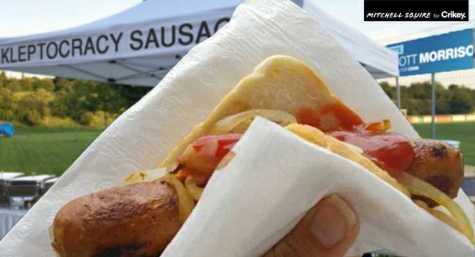 While out on a walk on Saturday morning I walked into a polling school I haven’t used before. I took the HTV papers from the few candidates I was interested. The snaking queue inside was about a 100m. I looked at the forms, and made up my voting intentions. But the length of the queue and the enticing smell of the snags annoyed me so much I dumped the paperwork, and continued on my walk. Later on I passed another booth, without the sausages, and voted for completely different candidates after rethinking whilst walking between the booths.

It’s not Australian with a hot dog bun!

1 slice of cheap white bread only.

In rural areas the process can be accompanied not just democracy sausages but also an interminable round of socialising and catch up’s as you run into people you haven’t seen lately.

Judith Brett’s latest book has a lot of background on this.

I accompanied a local to a polling booth in London for the Brexit referendum. It was a rather dull, low-key moment.

The other thing about the US and the UK having mid week elections is that there are lots more pre-poll and postal votes from working class people who find it too difficult to get to the polls on election days, than we have here, and as a consequence those votes general favour the left of centre parties, unlike in OZ and NZ where such votes always skew centre right.