UK parliament is moving to take control of Brexit

During a temporary absence of Theresa May, The House of Commons begins to hammer out some options to fix Brexit, writes Crikey's correspondent-at-large.

Mid-afternoon in a traditional British pub — dark brown polished wood, 30 taps along the bar, dustmotes circling in light pouring through leadlight glass. And on the flat screen above one corner, the grey blur of Theresa May afront the green benches of the House of Commons, burbling out answers to endless teasing questions about her three years of utter failure. “The honourable member will remember that this house voted twice to not exit without a deal but also to exit…”

“This house voted to exit, but not to exit without a deal…” May whispered, not because she was exhausted afresh, but because the landlord wouldn’t turn the volume up. “It’s chasing people away” he said, furiously rubbing at the brass bar fittings.

Who could blame him? This pub is the closest to the Houses of Parliament, Big Ben and Westminster Abbey looming over it, and it’s often groaning with political tragics. Less so actual politicos and SpAds (special advisors) who are wary of eavesdropping. All afternoon, people had come in, hoping that the TV would be showing the Commons in meltdown, and May on the floor beneath the despatch box, rocking from side to side in a foetal position.

But no, not yet. On the first sitting day after the European Commission gave their thumblock reprieve — no exit until May 22 if the UK passes May’s deal, an exit on April 12 if they don’t — May made it clear that she would not be re-presenting the withdrawal bill today. That would be its third outing, and there is no indication that it would not go down again, nearly as badly as the first two times — the first- and fourth-worst losses by a government in parliament’s history. 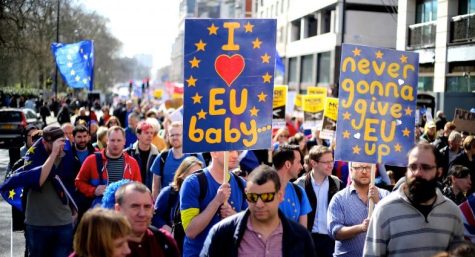 That announcement came after yesterday’s meeting at Chequers (the UK PM’s country residence, not a pizza restaurant in Essex) in which May had summoned half a dozen of the hardcore Brexiteers to see what could be got. Nothing, as it turned out, though the public learned a lot from the photos of those arriving, one in a vintage car, Boris Johnson in his stupid hair, and Jacob Rees-Mogg with his son/Mini-Me  Peter.

May allegedly offered to resign immediately after the Withdrawal act was passed, which was rejected. Johnson had already written an op-ed for Monday’s Daily Torygraph, saying May must go and the UK must crash out, which the paper splashed as a full cover front page using for a photo… Boris arriving at Chequers.

Thus it was that the start of one of the most significant periods in English political history began with all the ceremony of a minor counties cricket fixture in Kidderminster on a wet Wednesday. May had scarpered, not without some rare approval from the pub gallery:

Man with pencil-thin moustache: “She’s so much smarter than they are…”

Yah-yah type: “You’re the only one who thinks so.”

Silence — and in May’s absence, parliament moved slowly towards a vote to take control of its own process.

“This is not an abrogation of our ancient processes,” someone noted. “The government has only had control of the order paper since 1906.” Nevertheless, there has been something pretty momentous about this debate (which continues as I file this story). Several amendments are up, but the crucial one is Tory hardcase Oliver Letwin’s, which entrenches backbench control of the order paper and allows “indicative motions” — i.e. non-binding alt-Brexits, presented as business motions — and makes it possible for those to be voted up on Wednesday.

As these points began to be argued, something pretty extraordinary happened. The House of Commons is usually more civil than the Australian House of Reps — mind you, so is a riot in a secure criminal mental facility — but in this case, party divisions simply dissolved. Leave and Remain both have their left and right wings; there’s no way of decisively ratcheting one division into the other — and so dozens of MPs spoke and listened to each other. With May and the hardcore Tory right Brexiteers absent — trying to further hammer out a deal — MPs could speak like they were, I dunno, a bunch of people elected to a chamber to run a country.

The ad-hoc pub crowd got quieter. Something was happening. “It is very late in the day for indicative votes,” Labour EU Exit shadow Minister Keir Starmer said. And then, unrehearsed, in a moment of absolute clarity: “this is what we should have been doing two-and-a-half years ago,” to general assent. You could hear the shame.

That all came to an end, of course, as time came for the amendments to be voted on. EU Exit Secretary Stephen Barclay breezed back in to argue against any attempt to get around the government. The atmosphere thickened; Labour withdrew its own amendment, to let Letwin through. There was a vote, a division, and the result came back — 329 to 302. The plan to wrest control of Brexit from the government had passed.

So what now? By the timetable of the “indicatives”, there would be paper ballots on Wednesday and then on Monday, April 1 — with a possible bill on April 3. That could result in a second referendum, or a softer Brexit. But whatever it decided, it would require another extension by the EU, and total confusion over whether the UK votes in the European parliament elections. And quite possibly, Theresa May may now bring her withdrawal bill back in for a third vote — with the hardcore Brexiteers lining up behind it, as the least worst option.

Guy Rundle is reporting from London this week on the Brexit chaos. Read more of his coverage here. 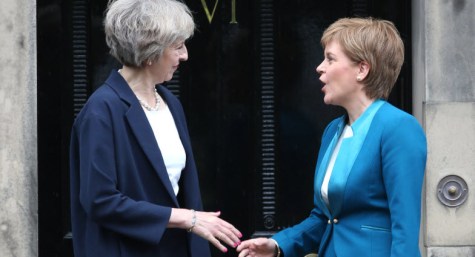 Geez Guy . Heroic. Lunchtime to closing time in the pub; on the job. And the best , step by step, blow by blow in our media here of what on earth is happening there. Thanks.

I was thinking the same thing. If there were a way to channel funds into Grundle’s bar tab I’d happily see him write and file from that location, or similar to it, more often.

(posted from a pub while travelling for work!)

Macron is threatening use of the French military next weekend to bring the Gilets Juanes movement to heel.
The Brits could use the same upping the ante medicine when it comes to dealing with their deplorables.

Nothing to do with Rundle’s fine writing but my head began to ache while reading this. There will be no such thing as a dignified Brexit & one wonders if there ever could have been.

Could we get one of those?

It can’t be denied that the Maybot has united the country, the Parliament and the bloviators, no matter their many differences, in loathing her duplicitous performance and perfidy in presenting a ‘deal’ that would be BRINO – Brexit-in-name-only.
Why it was ever imagined to be a sound idea to put negotiating leave in the hands of a political party instead of non partisan technocrats in a mystery for the Ages.