London is a city with one thing on its mind: Brexit. And it's not just the usual suspects marching in Theresa May's disintegrating England, finds Crikey's correspondent-at-large.

The crowd turned the corner from Piccadilly into St James’s Street, past the stone façade of the Ritz Hotel, and the white stucco Regency shopfronts, and they kept coming, and coming.

Couples, groups of kids, formations marching behind flags — Scottish saltires, the Welsh dragon, the Cornish black and white cross, the red flag — and a thousand handmade banners, from the elaborate panto blue’n yellow numbers — “Brexit makes as much sentence as this sense”, “Pulling out never works” — to the texta-on-butcher’s paper special “I am Really Quite Cross About This”.

They were 60-somethings in that British protest special (the anorak), well-heeled couples in Aquascutum windcheaters, and quite a few of the poor and parochial, old denim jackets, and worn-thin Marks and Sparks sweaters. There were lots and lots of kids, and anyone 12 years and up had a sign of their own. This was Saturday’s “Put It To the People March” calling for a second Brexit referendum. Organisers said it topped a million people, making it the largest ever public march.

The feeling of unity of purpose did not survive the start of the speeches: Labour Deputy Leader Tom Watson, who has been making an open move against Jeremy Corbyn for months, was roundly booed by a section of the crowd. “I’m here for my ten year old daughter, and she thanks you for being here for her future!” he told the crowd. Wanker.

In every pub, every café, the hallway of every rail station, in the broad sweep of Regent Street, and the narrow lanes of the City, Brexit is being talked of everywhere. I’ve never seen or heard anything like it. Behind you, in front of you, it’s in the air. “Won’t have any cheese after a couple of weeks,” someone said next to me in the pub where I’m writing this, a few minutes ago.

“Corbyn, where he is/he’s doing his best/his best isn’t good enough/she’s got to go!/that woman/the thing is, we didn’t vote for a disaster, its not a bloody suicide note/we should just go, for god’s sake, that’s what we voted for”. That, in Paddington station, in quick succession, people passing back and forth.

This is how history happens I guess. The degree of political crisis is so great that the fiction of legitimacy and representation breaks down for vast numbers of people. Disengagement melts away because people start to feel that their opinions may have some weight.

Crisis is, for once, not an exaggerated term. Last Friday, UK PM Theresa May went to the EU Commission, asking for a three month extension, even though she could not guarantee this would help her pass the UK-EU deal that had twice failed in parliament already. The EU instead gave her until May 22 – but only if she gets a deal through this week. If not, the UK has until April 12 to either cobble together a new deal or crash out.

Whether Theresa May will be PM when that date rolls round, or by the end of the week, remains to be seen. There has been plotting against her all weekend, with voices across the right, both Leave and Remain urging cabinet to tell her that she must go. Various batty suggestions have been put forward: that her Brexit deputy David Lidington become an interim PM before a full leadership competition; that May quit as Tory party leader but remain PM; or that fervent Leaver and sinister meat puppet Michael Gove take over. The front page of Monday’s Sun tells Theresa that it’s time to go, so the tanks are really rolling now.

By Saturday night it was rumoured that 11 Cabinet members would confront her on Monday morning, before the Commons meets in the afternoon; by Sunday the coup was said to have collapsed. On Sunday afternoon, she met Boris Johnson, Jacob Rees-Mogg and other Leavers at Chequers; someone later leaked Johnson’s Monday column for the Telegraph, which said that May was “chicken” and had “bottled” it and had to go.

Meanwhile, vast swathes of the government have been given over to “crash-out” planning, with thousands of public servants, council staffs, county offices, working on “Operation Yellowhammer”, the emergency plan to ensure food, fuel, foodstuffs etc. The military has a staff working from a bunker. The contempt for the government, from both Remainers and Leavers, is total. People spit out Theresa May’s name. London’s leftist Remainers aren’t that thrilled with Corbyn either, who has kept his commitment to the referendum result, desperate not to alienate Labour’s pro-Leave northern half.

“Tom Watson everybody!” Back at the rally, cheers and more boos as he left the stage. Watson had given the official version of the “people’s vote” push. As a loyal Labour member, he had supported the referendum, but now could no longer etc etc.

The crowd lapped it up. Though they’re from all classes and communities, they are all, in this great cosmopolis, cosmopolitan. They’re mostly Labour or left of it; there were only a few Tory formations — including a slim phalanx of slim young men afront a “Young Conservatives for Remain” banner. Then some youth speakers, some short films on the jumbotron, and then godhelpus…

“Please welcome Michael Heseltine!” Trying to work up applause for the man more Thatcherite than Thatcher. Some booing — less than for Tom Watson actually — and then the now-ancient Tory, in gardening jumper and open-collar, let rip. And man what a speech it was. Among the halting, jerking expressions of bewilderment and pleading, the MC youthworker pitch and the too-clever, demobilising films, Heseltine made a pitch not to the dominant mood — that Brexit was a farce — but to the idea that it was a tragedy, and that the EU had arisen from the catastrophe of World War II. European union was a testament to the idea that “the bitterness and bloodshed of Europe’s past should be buried with its history of the young sent to the trenches and battlefields, that which must never happen again!”

Magnificent in style, magnificently wrong: the EU has become an instrument of capital more than a social Europe, and thus catalysed the ethnonationalist revival sweeping the continent, something Tory Remainers would find hard to acknowledge.

But a prelude today, when parliament may well take control from the government that sits within it, who could know where we will be by the end of this evening, England, my England? 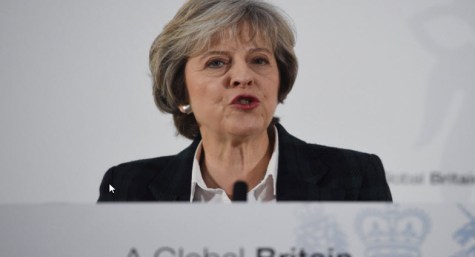 Disasters of Brexit expose the fragility of democracy

Is there really a contradiction to “never again”? Capitalists do not like world-wars much either, these days. Anyway, is it inconceivable that Brussels should at some point reject austerity and other capital-protecting policies?

Armaments are major export earners for France, Sweden & Germany – as well as Britain.
Which need to be used up which is just dunky-hory as long as they go bang elsewhere.
The only thing BigBi$ hates more than paying wages is paying living wages which is the ultimate cog-dis – if you don’t need them, don’t feed them but if they starve they’ll not be able to buy the toys they produce.

If anything has tested the nation to its limit since WWII it’s this Brexit debacle. One wonders if any of David Cameron’s friends are still speaking to him.

SamCam is reportedly not speaking to him, hence he spends a lot of time supposedly writing in his ‘shepherd’s hut’ in the garden.
Rather like the Abbottrocious batching in the garage since being evicted from the AFP college – Marge won’t have him in the house.

“I’ve never seen or heard anything like it.” I am somewhat relieved to read that Guy. I cannot recall anything like Brexit before. It’s quite beyond my comprehension and I thought it may be a factor of distance.

The Catalysation of the ethnonationalists (RACISTS) by Boris and Nigel (ALSO RACISTS) is how the UK got to this point.. It’s all downhill from here for the worlds #7 economy..

Brexit is like discovering two years ago that you caught herpes and from that moment becoming hysterically committed to the idea that if you ignore the reality of it long enough it will all go away.