The media’s love for the Berejiklian government wins the day

In the final days of the NSW election campaign Crikey readers made it clear that they’d had their fill of the media’s support of Gladys Berejiklian’s Coalition government (which many major papers endorsed in the lead-up to Saturday’s election). As one reader pointed out, papers often seem to forget that NSW is more than just one city. Elsewhere, readers discussed Turkish President Recep Tayyip Erdoğan’s Anzac stoush with Scott Morrison, and the divide between New Zealand and Australia’s responses to Christchurch.

On the media’s support for Berejiklian

Richard Shortt writes: The Tyrants Handbook, chapter one: lock yourself and your supporters into power. Chapter two: rewrite history. Chapter three: create an existential crisis to distract from your previous two acts. Putin’s well into chapter three, Erdogan is about to begin.

Roger Clifton writes: Kiwis must be weary of being tarred with the same brush as Australia. However this time the inaccurate insult must really hurt.

Justin Wood writes: As an Australian living in Aotearoa for the last three years, the response of this country and its people, the strength in compassion and empathy, has made me fall to my knees and weep. I could not be more proud to live here, and more ashamed and angry at the hateful place Australia has become.

Mark Hipgrave writes: It is indeed telling that Morrison didn’t feel the need to complain about then-SMH journo Lenore Taylor’s 2010 piece about him recommending to the shadow cabinet that they promote anti-Islamic sentiments. Now he is embarrassed when Waleed Aly mentions it, and threatens to sue Aly. But not the author? 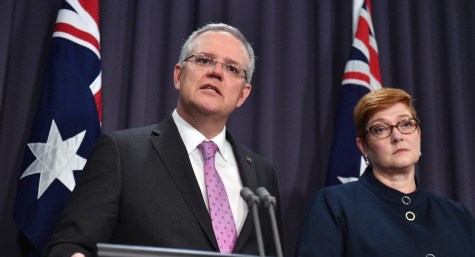